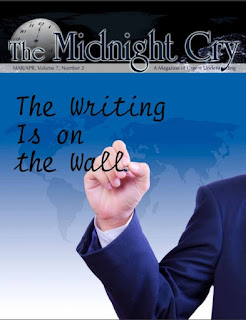 What happens when a branch of the Church of God, one that's been led by a single autocratic figure, suddenly loses its leader. That's what recently happened to the Church of God's Faithful, a South Carolina-based PCG splinter (see last month's article). Robert Ardis has gone to whatever eternal reward awaits him.

You'll be relieved to know that the sect magazine, The Midnight Cry, has continued to be published. There's obviously a new editor. Who can it be? One Jon Ardis. Could this be the anointed son? CGF apparently continues "all in the family". Gerry and Stephen over in PCG; Robert and Jon in CGF. Nepotism? Oh my goodness, gracious no. How could you even think it?

Prophetically (!) this issue's cover is emblazoned with the words, The Writing Is on the Wall. That could well be true, but possibly not in the intended sense. Ardis the Younger has penned a fairly bland editorial. Kiwi writer Wally Lawton draws on his vast knowledge of the Bible to pen an article on Iran/Persia and prophecy. Reuben Lister warns us all that national slavery awaits.


Sad to say, these prophecies are about to become a reality and it’s hard to accept that Great Britain, America, and the nation we call Israel will all be reduced to insignificance. All will go down together, ending in slavery and utter despair.

He's right about one thing, it is hard to accept. Impossible, in fact, fanciful misrepresentations of Deuteronomy 28:64-68 notwithstanding. Have these geniuses ever considered the logistics of such an undertaking?

So will the tithe-payers continue supporting CGF, or will there be a general wising up? It appears that Jon is paddling hard and the team is standing by with buckets ready to bail as necessary.

Whether that will be enough remains to be seen.

Well, there was the Philadephian Church , the Laodicean Church, etc.

Is this group known as the "Ardis Era" church?

It appears World Vision will not be hosting LCG anymore, according to As Bereans Did.

On another matter here's a post discussing some of Meredith and Ames' co-worker letters from 2011-3.

"Even apart from that, as a minister of Jesus Christ in His true Work for over 58 years, I clearly perceive that within the next three to six years truly awesome events will begin to take place! By this time six years from now I feel—based on my decades in God’s Work—that the “world” around you will be vastly changed from what it is today." (Roderick C. Meredith, May 18, 2011.)