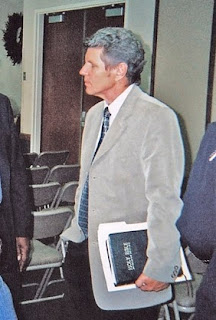 Why is Mark Armstrong, widely overlooked scion of the Armstrong dynasty, so angry? His February 19 letter to members and supporters is a near-apoplectic Tea Party rant.


We've got a president whose greatest accomplishments are to bolster the worst regimes on earth, at great danger to our national security and that of our allies.  Any hope of a collapse in the brutal, abusive regime in Iran can be forgotten on account of the nuclear "deal" struck by the president and his haughty Secretary of State.  Iran is already drawing on the hundred billion dollars that was frozen by sanctions, exporting oil and working trade deals all over Europe.  They've got hidden nuclear installations the UN's IAEA has never toured, and satellite photos seem to show an area believed to be used for testing to have been razed and completely paved over.

Despite the ridiculous one-sided "deal," Iran remains belligerent toward America and routinely threatens Israel with annihilation.  All the while they are violating the "terms" of the arrangement, knowing that our president will not do anything to pull the plug on one of the only things he can point to as an "accomplishment." Iran is also going to great pains to conduct all their business in other currencies, avoiding use of the U. S. dollar in their transactions.  It is a trend that seems to have gained traction in the Far East as well.  China has reportedly begun to conduct much of its business in other currencies, cutting the dollar out of most of its transactions.

Meanwhile our anti-American president is busy boosting the communist regime of the Castros in Cuba, agreeing to a swarm of international flights to and from Havana in addition to setting up a U. S. embassy there and allowing one of theirs in Washington D.C.  What's the meaning of that?  To help the Cuban people, as he's claimed?  None of this is going to help the Cuban people!  Their government controls everything, there is no private enterprise or ownership, and dissent is met with long prison sentences under the most deplorable of conditions.  How will Obama's friendship change any of that?  How will it change for the Iranian people?

Our anti-American president is the biggest supporter of "gay" nonsense to ever come along.  Even the Clintons didn't stoop to these depths until recently.  Or at least Bill didn't, near as we can tell.  But that's a whole other can of worms.

That's just a sample. Read the whole incontinent tirade here (but do it before Friday when his next screed replaces it).

Last I heard, Mark was not an ordained minister of his father's last (and least) sect, the Intercontinental Church of God, but being of the anointed bloodline he seems to act like the owner-operator. I guess he pays himself accordingly.

Not good for your blood pressure, Mark. You're so far along the "grumpy old git" continuum that you're in imminent danger of falling off the edge. "Our anti-American president"? You're entitled to your WND wingnut views, of course, but whatever happened to 'respect for the office' and the democratic will of the people? And those derogatives; "homo" and "tranny" at the end of your epistle (at first I thought you were referring to old-fashioned radios) are not signs of a class act. Loutish is the term that springs to mind.

That he gets away with this probably indicates the mentality of the folk who choose to remain with the ICG. Mark makes Rod Meredith look politically correct.

Mark is just following in the family pathology. Armstrongism always was an angry, growling religion. It Is of a dark spirit.

Is there a splinter group that you with your whole mind agree with!

I follow otgosh and nohwa plus other so called disagreeableness.

not in endorse to them or other who come close. Is a pastime to see how they all stumble to be correct.

LNRD, the short answer to your question is... no.

Pray tell, is there one you agree with unreservedly?

Perhaps The Daily Mail has the answer:

"The University of Bonn study also found that the angry types had less grey matter in the amygdala, a part of the brain that helps keep our emotions in check."

He probably can't help it -- he inherited it from his grandfather.

It's bad enough to work for such people, but for those in the ICG, you want to be with your ANGRY 'leader'? 2005 LCG might tell you where that could lead.

As we suspected of Armstrongist leaders: Part of their brain is missing.

It appears that the anti-Armstrong website movement is growing FAR FASTER than 30% a year!

However, Armstrongism is a shrinking universe demographically, and yet information supply is growing. Will there be
an "Anti-Armstrong" information collapse coming similar to the oil glut currently?

Will there be a merger of efforts, creating a 10 Headed Beast Power of Anti-Armstrongism? Will there be an internet
"Place of Safety" where all anti Armstrong information will be blocked?

Connie, I can't speak for anyone else, but if all the sects of the Cult of Armstrong Mafia disappeared tomorrow, there would still be years of material.

And people to look in on it.

Decades from now the Armstrong movement and the anti-harmstrong movement will be examined by scholars. The shrinks will enter into the fray, papers will be published. Books will be kindled. What will their findings be?

That a group of people can and will fight for truth while others hot-tub themselves in pleasant fallacy and cheap wine. All this over a despotic book about a bronze age god who has sadistic tendencies and ill intent for those who question his authenticity.

In the meantime, several new movements will evolve that are expert at picking pockets, teaching questionable doctrines based on the work of other false prophets of doom. And the world goes on....

"And those derogatives; "homo" and "tranny" at the end of your epistle (at first I thought you were referring to old-fashioned radios) are not signs of a class act. Loutish is the term that springs to mind."

"Daddy" is what springs to mind to me. :-) I well remember the sermon Mark's daddy gave back in the early 80s in the CGI. He was on a typical rant about gays, explaining that he was tempted never to go to a buffet restaurant ever again because one of the gay employees might have "sneezed in the salad" and give him AIDS. (That never made sense to me...a cook in the kitchen could just as easily be gay, if that REALLY was an issue...) And then he went on to rant that if he had his choice of how to deal with all the gays in the world, he'd like to "run them all over with a big Peterbilt truck." Yes, that was his choice. I would assume that the average person in the US of that era mentioning big ol' trucks would have said "Mack Truck." Mack Trucks were the standard truckin' cliche. But not ol' Ted. He fancied Peterbilts.

NOT a cool declaration for a man who had admitted not many years before of being a serial adulterer/and/or/seducer of young coeds to the tune of, in his own words, "hundreds." By this time, of course, he had become a New Man, and totally made things right with God about all that supposedly (although not with those scores of women...and their fathers and husbands...). Of course, as it turned out, he never really had done so, and was forced to storm out of his relationship to the organization he'd started, and start all over anew...because turns out he was having a long term affair with a married woman in the local CGI congregation. It is so ludicrous how the Armstrong males could convince themselves that homosexual acts were in some sort of "different class" biblically from adultery...and incest. Even though, under The Law of the Torah both adulterous AND homosexual acts were capital offenses.

Connie...it's kind of like driving by a car wreck and finding it almost impossible to not want to slow down and crane your neck to see what's happening. Yeah, the Mother Cult's grandbabycogs are growing smaller and smaller, but it's creepily fascinating at times to be tempted to watch the shriveling process.

Personally, my favorite course at University back in the 1970s was "The Social Psychology of Social Movements." And the Armstrong movement has been SUCH a poster child/textbook case for every excruciating detail of what it's like to be a True Believer that it honestly has been fascinating to watch the disintegration take place. My Soc/Psych class was where I first read the books "When Prophecy Fails" (the originator of the term "Cognitive Dissonance") and Eric Hoffer's "True Believer." If one was going to give a Soc/Psych lecture series based on those books now, you wouldn't need to look any farther than the COGs to have every bit of "Case studies" you'd need to illustrate the principles discussed in the books.