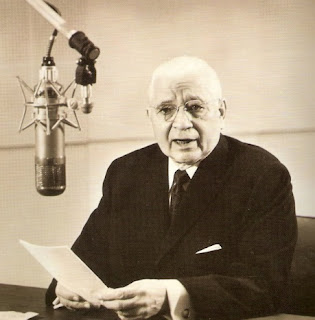 Herbert Armstrong's ministry began in the 1930s as the Radio Church of God, a name that stuck through till the 1960s. Radio may have become far less important over the intervening decades, but a few faithful followers of Herb's vision are still slogging away in front of a microphone. A very few have gone beyond simply buying up time on commercial outlets, and created DIY stations of their own.

Gerry Flurry's PCG operates its own low power FM station out of its compound/campus in Edmond, Oklahoma. KPCG, variously styled The Voice and Trumpet Radio, broadcasts a heady (or perhaps headless?) mixture of classical recordings, far right rhetoric and biblical broadsides. Thanks to the internet, loyal PCG members can tune in for wall-to-wall Flurryism 24/7, wherever in the world they happen to be.

Then there's Radio4Living. Based in London and probably operating out of someone's garage or spare room, this internet-only enterprise booms out with the Armstrong gospel to whoever cares to listen which, frankly, won't be all that many (under 300 people have added it to their Tune In app, most of whom will have then forgotten it's there). John Jewel, Warren Zehrung and others hold this ministry together, with old HWA recordings added into the mix for good measure.

If it's nostalgia they want, I recommend old episodes of the Andy Griffith Show instead.
Posted by Gavin R at 16:57

The first step toward success is taken when you refuse sto be a captive of the environment in which you first find yourself. Check my site also if you have time, I had a great time reading your article.
gofastek.com