COG trivia: In my heart there rings a melody 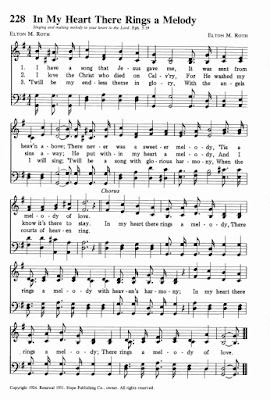 What relationship has this hymn by Elton M. Roth to Herbert Armstrong? No, it didn't appear in the famous purple hymnal (nor even in the earlier gray hymnal). You wouldn't think, looking at the lyrics (see the original PDF here) that Herb would have had much use for it, and it's clear modern devotees don't. Yet it's an important part of GCI/WCG/Radio Church of God history.

The answer lies in the Autobiography of Herb Armstrong.


In those days "The Radio Church of God" opened with an opening theme, the hymn composed by Elton Menno Roth (who later became my personal friend) "In My Heart There Rings a Melody," sung in lively manner by our "Radio Church Quartette." (1967 edition, p.508)

Yes brethren, this is the foundation theme song to the Church of God. More than that, it was composed by Herb's "personal friend"!

So can we expect to hear it at this year's Feast of Tabernacles I wonder, at least among the most slavishly devoted of Herb's imitators?

A solo by Stephen Flurry, Bob Thiel tinkling the ivories and Dave Pack on the tambourine?

Can't you just picture Ronnie Weinland on the harmonica with Rod Meredith clapping and stomping along in time?

For those of us who don't read music, there's a recording for you to sample here.
Posted by Gavin R at 16:56

Email ThisBlogThis!Share to TwitterShare to FacebookShare to Pinterest
Labels: Music and hymns, Radio Church of God

GTA used to have an opening that had a bass drum and horns followed by the booming voice of famous radio announcer Art Gilmore proclaiming ..."The World Tommorow, Garner Ted Armstrong brings you the Plain Truth about todays world views and the PROPHECIES OF THE WORLD TOMMOROW!"

Much bolder and brash than "In My Heart There Rings A Melody" for sure!

It's world news,Connie,not world views I remember sitting up every Sunday night at midnight to hear those words I used to walk around my house as a fifteen year old imitating Art Gilmour's opening llines Such nostalgia !As another song goes, "those were the days,my friend ,we thought they'd never end..."? Ian Boyne