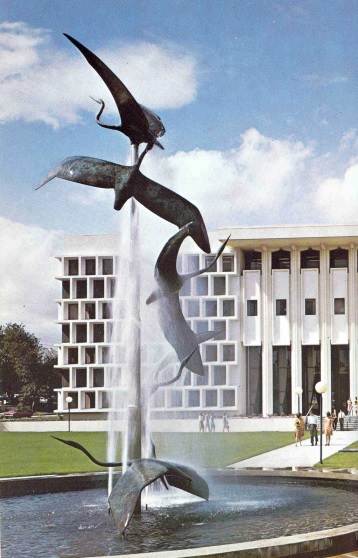 Gary Leonard has been posting photographs of the ongoing demolition on the former Ambassador College campus (see here and here). I can't help thinking about all those other photographs that graced church publications in former times (check out the old This is Ambassador College booklet, available as a PDF). A beautiful campus that was supposed to be a foretaste of what the whole world would be like in the 'world tomorrow'. As the preacher says in Ecclesiastes, "vanity of vanities".

For anyone who's even faintly interested, Ronnie Weinland, date-setter extraordinary and one of the Two Witnesses (the other is his wife!), is now out of prison. He had been in a halfway house since December, and was permitted during that time to preach to members of his designer sect, Church of God - Preparing for the Kingdom of God (COG-PKG). Not that he's quite as free as a bird; he's on three years supervised release. More information on Mike's Weinland blog.

Finally, on a sad note, Almon McCann, known to many simply as Corky, has died. Corky was a frequent commenter on a number of ex-WCG sites. He had past associations not only with the Worldwide Church of God, but also the Christadelphian movement. Some years ago he established his own blog that dealt with both fundamentalist sects. In more recent times that blog (now called ex-Christadelphians) has taken on new writers, but I'll keep the original link on the blog roll (Corky's blog) in the meantime. John Bedson's tribute to Corky can be found here.
Posted by Gavin R at 13:40

I am saddened to hear of Corky's passing. Probably some readers think from our conflicting posts that he and I were enemies, but we actually exchanged cordial email from time to time. Corky was fighting another battle about which nobody knew. His soul mate of many years, a once vibrant and deeply caring hospice nurse, was suffering from dementia, and was gradually losing her memory and therefore her personality. He confided in me that he was doing the best that he could to take care of her, but it was very heartbreaking for him to watch it unfold. Seemed from his description that she was in the final stages of this. I tried to encourage him as best I could, but what can one say?

My deepest condolences to all who were close to him. Rest in peace, old friend! You were one of the good ones!

I wish to extent my thoughts and condolences to Corky's family and friends. It is sad to hear that he has passed away.