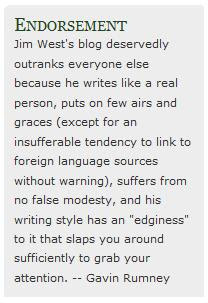 Over on Otagosh, my other less known blog, I recently took a sideswipe at Dr Jim West's disdain for inclusive biblical language. I wouldn't write that here, full-well knowing that 94.2% of readers (including the godless atheists - and you know who you are) would reach for a KJV, NKJV or (ick!) NIV if forced to source a proof text, whether for weal or woe. For some reason, unknown to me, Jim (who manages to be both a Southern Baptist pastor and a biblical minimalist at the same time) is one of the five people in the world who actually reads my alternate blog. This is a huge compliment in that Jim's blog (unlike Otagosh) is read widely. Very widely. In fact - as Jim never tires in reminding his readers - his is the leading biblioblog in the world, with a current Alexa ranking of 113,476.

So to find that Jim West is now quoting a section of that Otagosh posting in his sidebar as an endorsement is 'umbling in the extreme; to play Joe the plumber to West's McCain! I, being but a mere mortal, can only wallow in the reflected glory of it all.
Posted by Gavin at 16:52