Out for a Duck 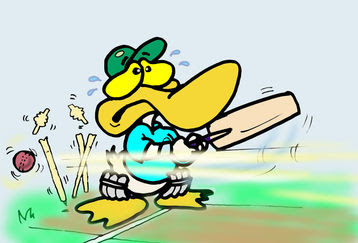 Ronald Weinland is like a bad smell that just won't go away. Long after he bit off his own toes in a classic "foot in mouth" maneuver, he's still entertaining the easily deluded with his feint and jab sermons. We are now 37 sabbaths into the Trib (see DW's latest entry.)

The miracle is that anyone is still paying attention. Whack these folk over the bonce with a bit of four-by-two and it's unlikely it'd even register. Even so, Ronnie ain't takin' no chances. According to Jack, Ronnie is warning the tithe slaves to stay away from the wicked Web. DW gets specific: FaceBook is causing the Witless One concern. Ronnie assures the fickle faithful that there won't be any FaceBook in his magical millennium! If Ronnie can't control it, it's got to go.

It's amazing how Ronnie talks down to his followers. He rambles, digresses and wanders off topic as if under the illusion that every stray thought will come as a precious drop of living waters to the dum-dums in the pews. How could any sane person sit there and take it? What horrible life-circumstances would lead anyone to submit to a self-professed prophet who "goes out for a duck" (a reference for all those who follow the gentlemanly sport of cricket) every time he steps up to swing the prophetic bat? 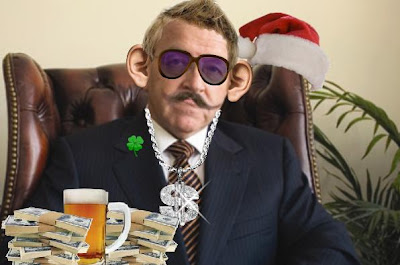 Frankly, Weinland is a sideshow. The tragedy is that he makes many of the other COGlets look practically balanced in comparison. Witness the field-day Bob Thiel has in pointing out the obvious inconsistencies. With Weinland as the whipping boy, it's easy to pretend that Thiel's cult-of-choice, LCG, is pure as the newly driven snow. Weinland is a gift for blokes like Flurry and Pack: a wonderful distraction from scrutiny of their affairs.

No matter. I'm sure Ronnie is good for another year or so of feint and jab, but eventually it might pay to undergo a makeover in order to continue extracting those tithes.

The tragedy is that he makes many of the other COGlets look practically balanced in comparison.

But I live in the hometown of Aflac insurance. And people here don't want you to go out without The Duck.

Ducks can be good for you. (Oh yes, and they're clean.)

"The tragedy is that he makes many of the other COGlets look practically balanced in comparison."

Ron got specific and when Ron gets specific things start sounding crazy.

"I gaurantee you there will be no Face Book or My Space in the new world. Oh you'll get in touch with the breathren just pick up the phone or send and e-mail."

Wha? There will be email but no Face Book or My Space - according to Ron any way.

(Ron just received revelation this weekend so you know it's fresh.) Unity of Belief Pt. 2 at 1:35:30

It's guys like Weinland (and Flurry) who make you have to hand it to guys like Pack, Meredith, etc. By claiming identities of such biblical "significance," they have people (at least THEIR people) hanging on their every word, expecting events of biblical significance (fire-breathing, rain-stopping, etc.). There really are no such expectations linked to the role of "Apostle," "Evangelist," etc. Pack can go on and on about the "end-times," giving endless sermons on "prophetic events," until the cows come home (er, until the "TW's" show up), and no one even thinks to question his validity. Meredith can continue to mandate churchwide fasts for "miracles," etc., but as long as nothing earth-shattering happens, the membership will continue to question their own faith, their own dedication, etc. (Armstrong stated, "Christ was ready to return, but the Church wasn't ready...") Weinland is numbering his own days...

Yep, you said it! It's just too bad that the followers of this fraud don't put as much money and devotion towards a legit charity. One that truly shows brotherly love toward their neighbor. This man is a crook, and his follows are pathetic.

Crooked as a dog's hind leg.

He looks like Art Bell in the doctored picture!

How is Art going with his 4th Asian wife?

Multi-millionaire Tkach is only on wife #2 - time to trade in I think.

A touch of Stan Rader...methinks that can be spelt another way....
RAIDER.

He was given a generous allowance for however long,to enable him to live in the manner to which he was accustomed.All from our "freely" given tithes,too.

Ronnie IS like an obnoxious pong...he just won't go away.He is one WIT we could do with LESS of.

As for making the other COGlets look balanced,that unfortunately is the truth.He blows hot,then crawls into his shell till the storm abates.Sounds like a Laodicean attitude.

"the end of all things is at hand", two thousand long years ago. And the heavens and the earth will be destroyed by fire at that time. All the elements will melt with fervent heat, two thousand years ago.

Remember when a couple of popes ago that that pope was the last pope?

Remember when Britian would NOT join the EU because they weren't part of the ten-toed kingdom?

Hitler will win the war and we will all be put in concentration camps and used for slave labor, unless, UNLESS, we send our tithes to Herbert W. Armstrong.

Well, oops - but, brethren and co-workers - Hitler is STILL ALIVE and living in Argentina and will yet conquer the WORLD. Keep those tithes and offerings coming in for this vital END TIME work!!!!

No, brethren and co-workers, we were not wrong about the great tribulation coming in 1972 and Christ's return in 1975 WE NEVER said that! We don't make prophecies about the end times. You have misunderstood us.

It looks as if God has given us another 19 year time cycle but great tribulation COULD VERY WELL BE in 1988 - that's a 40 year generation from when Israel once again became a nation in 1948!

Remember, Jesus said "this generation" when the fig tree (Israel) puts forth its leaves (becomes a nation) "shall not pass until all these things be fulfilled".

That's only 13 years from now, brethren, 7 years of great tribulation MAY begin at that time and if you squint and hold your mouth right it will add up to another 19 year time cycle!

This picture of WeinerDude is hilarious! It also reminds me of Ron Dart with his rug on his head.

Aw but he's so much fun to photoshop!

Ron is the best thing every to happen to Church of God comedy!

MY COMMENT - It is all so true. Some people, and I won't mention their names except their initials are Herbert W. Armstrong, Garner Ted Armstrong, Rod Meredith, etc., have turned the prophecy gig into a lifetime business of income and job security.

The world is always a more dangerous place when their incomes need a good boost - or, in GTA's case, gambling debts that need to be paid by the dumb sheep.

We shouldn't be too hard on these people because they were raised in times when morality was taught everywhere and was the public expectation of civilization. Although, privately it was often accepted, it was still marginalized to the fringes.

They based their urgency on the prophecies by Jesus and the Prophets of old, that the end time would be when humanity had lost all sense of concern for others, sin was the order of the day, and mass destruction lurked at every turn. To all these preachers, I guess including Meredith (although he should know better), humanity had reached that point!

Today's ministers and prophets should suffer no such illusions. There is abundant reason to believe that things can and probably will get MUCH worse on this planet than they are now. Even without scriptures, humans have a newfound ability to look into the future that our ancestors (including the Mayans) did not. We can extrapolate demographic, sociological, economic, and technological trends in ways that previous generations could not even conceive.

Things in the future don't really look that good for mankind. Christ's return will be much needed.

....have turned the prophecy gig into a lifetime business of income and job security.

There is much money to be made in Jesus is ALMOST here. There is NO money in he IS here or changed his itinerary and went on a Fall Festival Cruise for Himself.

What's worse is living off "almost here" while planning to build a new college or auditorium at the same time. Doublespeak....

Oops!
What I meant to say was:

"Although immorality was often accepted privately, publicly it was still marginalized to the fringes."

Today, immorality is quickly on its way to becoming a badge of honor in some circles. I am sure that we can all see where this is headed.

"or, in GTA's case, gambling debts that need to be paid by the dumb sheep."

You didn't mention massages that are needed to relieve lower back pain incurred by sitting for long periods at the card table.

I remember Teddy saying "I believe Jesus will return during my lifetime". He is in the same place as his dad right now. There it is cold, dark, and damp. I guess they both forgot that the wages of sin is death.


I don't know how you get a whole lot lower and depraved than HWA having sex with his daughter during "the formative stages of God's work after 1900 years!"


We shouldn't be too hard on these people

I think we should be very hard on them, as hard as they were on us!

You know what the Bible says to do with false prophets right?

...because they were raised in times when morality was taught everywhere and was the public expectation of civilization. Although, privately it was often accepted, it was still marginalized to the fringes.

HWA, EG White and Miller were certainly on the fringe!

I think we should consult Tom Mahon. This Ron guy looks seriously whacked out!

Larry said: "We can extrapolate demographic, sociological, economic, and technological trends in ways that previous generations could not even conceive."

Nah, we're not that good at it. We are only 5 years away from the 30 years into the future that "Back to the Future" showed us, and things haven't really changed that much!

Herbert would be proud of Ronnie,
"This by beloved Ambassador Student in whom I'm well pleased"