The World That Was 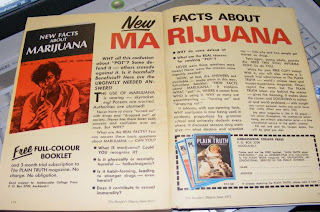 I got hit by nostalgia shrapnel yesterday: digging through the office shelves at work I came across ancient copies of the Reader's Digest. Let me explain that by nature I am not the tidiest, most orderly of persons, and that the cleanup was a once in five years event. Last time I'd uncovered the stash of Digests I'd left them there without a second thought. This time I took a break to flick through a few copies (I scored a dismal 17/20 on a 1966 It Pays To Increase Your Word Power - but I'd be prepared to argue the case on two!) then, behold, flying shrapnel...

... in the form of this double spread in the New Zealand edition of June 1971. I actually remember this ad, though it wasn't the one that led me to subscribe to the PT: that was about a year earlier - the bait was a brochure called Our Awesome Universe. Needless to say I was very young at the time...

I wonder how successful those Reader's Digest ads were? Given the piles of money WCG spent on them over the years I'd guess they were real winners. Once the beachhead had been established there then were endless booklets to get hooked on. In the less sophisticated 1970s glossy publications were more of a draw card than is imaginable today, though I never particularly "clicked" with either the marijuana booklet, or Hippies, Happiness or Hypocrisy? I guess I had a sheltered upbringing.

Does WCG still operate that box number? I wouldn't be surprised. I wonder what might happen if that coupon got sent it in - just a few years late. Do they have a form letter for this sort of thing?
Posted by Gavin at 21:18

Old literature requests that go to Pasadena are answered and given the opportunity to receive Theologically Accurate literature instead. Of course "theologically accurate" is relative. Armstrongites would not agree with the orthodox/Christ-centered theology of the new WCG.

Readers Digest was always somewhat of a different publication, because many of the stories were timeless, leading people to save them for years for re-reading. I don't know how they might have been esteemed in other parts of the world, but here stateside they were considered to be middle Americana. You didn't throw away Readers Digest, and you didn't throw away National Geographic.

Theology aside, it was actually quite brilliant tactically for the WCG to place ads in RD.

Now, I do have all of my Easy Riders magazines from the '70s and '80s, a publication in which not even Bikers For Christ ever advertised. Lately I've been considering "Ebaying" them. I'd guess they will fetch a considerably tidier sum than would old volumes of the PT, or "1975 in Prophecy." Although, "1975" was so camp, that it might now enjoy the same status as "Reefer Madness". Who knows?

Just What is the Church?=Honey, I shrunk the Church

What is Salvation?=We Wish We Knew What Is Salvation

A Whale of a Tale=Honey, I shrunk the Church

The Plain Truth About Tithing=(Unchanged)

Is God a Trinity? = God is a Tri-bi-uni-guy Depending, Just Don't Leave Us.

Should Women Preach?= Women Should Preach!

Christmas is Pagan!
Easter is Pagan! = Christmas and Easter-God's Holydays in Disguise

Halloween is Satanic = Spreading the Gospel With Your Halloween Handouts

The Four Hosemen of the Pukerlips = Joe, Bernie, Mike and Gregg in Prophecy

Will You Go To Heaven= When We All Get to Heaven

A Theory for the Birds = T-Rex Kinda Tastes Like Chicken

Is There a Real Satan? = Pastor General Votes Himself in For Life With Great Perks.

Why Were You Born = You Were Born to Comply in Him, As Explain by Us, To YOU.

My favorite New (well decade old) WCG Article is Mike Feazell's explaining the Holy Symbolism of the Christmas Tree and Its Ornaments. I never knew such profound truth.

From the late 80s until web pages, I didn't know what was happening in the WCG. But I remember a page ad in RD with a picture of HWA captioned Who is this man? The answer would be provided by the PCG.

I recall visiting a family in outback Australia with a collection of RD. They filled a glass-covered bookcase, preserved with the care Frank Costanza gave his copies of TV Guide.

And how can we forget that an advertising contract with RD was one of the big events of January 7, 1972?

Back in Woop Woop, it was de rigueur reading in the dunny.

"Armstrongites would not agree with the orthodox/Christ-centered theology of the new WCG."

This is an update for your column. I don't know how to get it to you otherwise...

Mrs. Meredith's surgery went very well. The doctor is pleased with how everything went. It is possible that Mrs. Meredith will be going home either tomorrow or Sunday. She and Dr. Meredith were able to get a good nights rest last night (Thursday) and they are sure that is due to everyone's prayers. Your continued prayers for her recovery are greatly appreciated!

Strange. I thought they were still dunking the sheeple. (Lack of oxygen to the brainstem makes the new recruit more docile? LOL!)

purple hymnal,
I am not "MIA". I have been at home with my dad, who is dying of cancer.

We, in the "new WCG" most certainly agree with the Christ-centered theology. (which is NOT new) In fact, I always did. And, that is probably true of all of us who stayed.

I personally did not join the Church of God because of HWA et al, but because God called me into His church.

There is a great deal of trashing of the various CoG's on this website; but I have evaluated virtually every other Christian denomination and found them seriously wanting, although not un-Christian necessarily.

We are where we are because that is where we are supposed to be. Faith can be found in many churches. Only God knows the heart.

Jeez, Larry. You hold too much in. Why didn't you ask us to pray for you and your dad?

BB,
Thank you. Your prayers and concern are much appreciated and welcome. My earthly father is confronting his mortality, and is not really handling it very well.

All of us will have to face the prospect of death one of these days. (if Christ does not return beforehand) And, we are the fortunate ones, who can bravely accept the inevitable, and know that incredible joy awaits us.

Larry, I'm truly sorry to hear your father has cancer. I have an idea what you are going through as my own father also has cancer.


You said: "And, we are the fortunate ones, who can bravely accept the inevitable, and know that incredible joy awaits us."

I certainly hope this is the case, however I would dearly love to see some proof of this. Proof that doesn't come from between the pages of a book written by men about bronze age stories.

//-- My earthly father is confronting his mortality, and is not really handling it very well. --//

Sorry about your dad. I know what it's like to watch somebody close die a slow death. I'm glad you're able to spend some quality time with your father before he passes away -- and hope you also have a few friends and loved ones nearby to lean on when the going gets rough.

As sappy as it sounds, remember this: if you have a piece of the Almighty in you, then you can have a strength that doesn't have to come from you. Trust Him for that.

My condolences as well, Larry, and I hope that your father is able to find some peace.

Will be thinking of you Larry. No matter our perspectives, life does what it does and I suppoose if we agree to show up for it, we have to agree to leave. Difficult under the most faithful and best of circumstances.

I just spoke with my 93 year old tired dad and know that time comes soon too. Lots of memories and how quicky it all goes by.

We get old if we're lucky.

My thoughts are with both you and your dad.

Charlie, I understand. Yours is the age-old dilemma. We would all like to have "proof". And in the future, that proof will be available to all. But, if you have proof, one does not need faith.

And right now, at this point in history, God is training (and/or selecting) those who will be the leaders in His government for eternity. And they MUST have faith. They must be willing and able to trust God, even when it seems crazy, silly, impossible, irrational, or even foolish.

This is what some of the angels DIDN'T DO. And they should have known better. (they had proof)

P.S. I appreciate all the outpouring of support here. At the end of the day, we are all human. And in fact, we are all on the same team.

Larry, I hope the best for your father, and for strength for all who are aiding him.

"Back in Woop Woop, it was de rigueur reading in the dunny."

It's been a long day for me, and I'd appreciate it if someone could decipher that for me.

I will check in on things here tomorrow.

"Back in Woop Woop, it was de rigueur reading in the dunny."

"woop woop" mythical Australian country or out-back place, as in "He comes from woop-woop"
"dunny" outside lavatory

So if I correctly get the gist of the last few comments, the dunny is the out-back house in the out-back place?

It could be worth an experiment to put in those old church literature requests to see what turns up in the response from the Tkach regime(as opposed to Armstrong regime) WCG.Of course as the old literature has been taken over by the Philadelphia Church of God the WCG could do the redirection service.This brings its own problems as the sectarian PCG is a barrier to pan-Armstrongite cooperation by its policy of cutting off the other groups when it is however ideally situated in terms of being a central postal agency for the entire pan-Armstrongite movement.