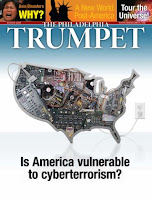 Inspired by a recent magazine cover, this commentary appeared in The Clog, the staff blog of Philadelphia's (the city) citypaper.net.

The Philadelphia Trumpet, as Jon points out, has nothing to do with the city or a sexual position (we were disappointed too!). It's actually the monthly publication associated with the Philadelphia Church of God, based in Edmond, OK (get the skinny on them here). While it should be assumed the name derives from the fact that being a Philadelphian is next to godilness, they actually got it from a church in the book of Revelation. It was never mentioned in the 2005 miniseries starring Bill Pullman, so I can't confirm the truth in that statement. Still, had the Trumpet seen Live Free or Die Hard, they would know that we are all in fact vulnerable to cyberterrorism, and only John McClane can save us.

A Philadelphia trumpet position? Uh... will any of us ever be able to think of Gerry's rag in the same way again?
Posted by Gavin at 11:52

Regarding the Trumpet article, Is America vulnerable to cyberterrorism?

Of course it is! The terrorists at PCG headquarters are using the Internet to try to capture and destroy Americans, especially those who were in the WCG.

It is a two-way street. Brave and honest freedom fighters can also use the Internet to expose and oppose the PCG terrorists that Satan has sent against Americans, and especially against those who were in the WCG.

The danger is that some free people might read the PCG lies and get ensnared if they do not research it properly before joining the cult. Once captured by the PCG cult, they are forbidden to use the Internet, or to learn anything. They are even forbidden to talk to family members who were members of the WCG. This makes it difficult for them to see through Gerald's dirty tricks, such as editing Mystery of the Ages so that he can be the leader of a cult while claiming to be a prophet.

The PCG cult invariably turns out to be guilty of everything bad that it accuses others of. So, if you want to see how terrorists operate, the PCG just might be the cult for you.

I always call Six Packs rag The Philadelphia Strumpet. It is especially appropriate since Six Pack's cult is one of the more than 650 harlot daughters of Armstrongism.

Maybe that's why Gerald Flurry refers to it simply as "The Trumpet" on TV now.

I imagine that some musicians end up at the PCC website because of "trumpet" related searches. I can just imagine them scratching their heads.

PCG is the church that truly blows, and not in a good way.
No improvisation allowed there, and no jazz.
Hey, at least the scientologists have Chick Corea!