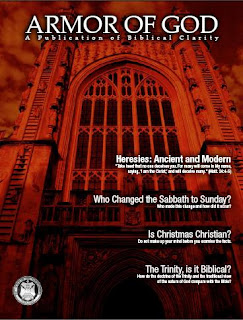 In the beginning was The Plain Truth. That's if you don't count the Bible Advocate.

These days the PT - cut loose from the Tkach church - is unavailable outside the US and Canada, where it promotes a weird "religionless Christianity" gospel for a small fringe readership. In its fading shadow many pretenders have arisen: the Good News (UCG), Tomorrow's World (LCG), Vision (COG-aic), the Trumpet (PCG) and - reinventing the wheel - WCG's Christian Odyssey... these are the flagships of the fleet, the way the various Churches of God present themselves to the world at large, dripping wholesomeness and cheap wisdom, garnished with a pretense of biblical competence and prophetic insight.

A lesser known contender is Armor of God (CGI). I'm not sure how many print copies circulate - probably not a lot - but if you're curious you can always download a copy. Although issued irregularly, it compares well to its bigger siblings in concept and design thanks to the undeniable talent of Shey Smith (in comparison Tomorrow's World looks almost geriatric.)

Content? Well, that depends what you're comparing it to. Depending on your perspective the articles are either fresher or goofier than the big boys churn out (or possibly both)... it's certainly hard to imagine references to ancient worthies like Polycarp and Polycrates making an appearance in the Trumpet, for example.

CGI's first flagship magazine was the ill-fated Twentieth-Century Watch, launched in 1980 (with an innovative cover price of $1.25) and then sinking like a stone. TCW featured well known ex-PT writers like Garner Ted Armstrong, Brian Knowles and Gary Alexander, but Armor's by-lines are far less familiar: there's apparently a shortage of aging Armstrong-era identities on tap.

Though, with reference to the current lead article, perhaps a future edition could include a feature called Just what do you mean - Boyne Again?

Email ThisBlogThis!Share to TwitterShare to FacebookShare to Pinterest
Labels: CGI

"Before Thursday night, when the Treasury secretary, the Federal Reserve chairman and leaders on Capitol Hill proclaimed their intentions to take over bad debts, the prognosis for the American financial system was sliding from grim toward potentially apocalyptic."

Maybe Rod and the Churches of God are right?

Yes they are absolutely right.A year or so ago the experts who work on this kind of thing were saying the big storms and earthquakes were something that happened every hundred years or so, the earth usually goes through some upheaval but it wasn't anything unsual, now that they are not talking like any more. Now you hearing record this or that or worst in recorded history. You hear about when not if a super hurricane is going to hit New York or when a tsunami will hit the pacific coast especially Oregan. Cnn had a great piece I forgot the exact title but its something about our planet in peril Tom Brokar also had a good one on the subject.It,s not just the good ole US but the whole world is in great danger.Now everyone is seeing how grave a condition the US economy is in. I am glad to see you are waking up.

Though still a fledgling, New Horizons bi-monthly magazine (CGOM) has an interesting take on some topics. View at www.cgom.org

and speaking of the Green Party,

you may find THIS amusing

I hear that Ian Boyne is making great strides in getting truth out in the area(s) he works in and alot of growth is being accomplished.

Will the super-stash of Armstrong literature I have buried in the New York area effect the path of the super hurricane?

I can only hope so, just like at a big one at the Jekyll Island feast site, when the hurricane actually split into two halves and went around our tent, and then the hurricane joined halves again and headed on down the road.
It wasn't fun, as GTA got us down on our knees during the storm, while we were under the "Herbie's big top", and led us all in prayer, kneeling on the wet asphalt, while we with hands folded leaned on the metal fold-up chairs, fervently begging for God's protection. WHAT A GUY, that GTA!
It was even PROVED to us the next day by the minister who told us that the NATIONAL WEATHER SERVICE HAD CONFIRMED THAT THE HURRICANE SPLIT IN TWO AND WENT AROUND THE HERBIE-TENT!!!
I believe we were told that since staff at our hotels had been so stunned, we shouldn't mention it to them. Or check with the National Weather Service, for some reason.

The National Weather Service failed to confirm, however, how many blow-jobs GTA was getting on his flight to the next Feast Site.

But, I'm just so HAPPY that with the proper amount of PRAYER ON THIS BLOG, that God may protect my stash of Herbie's literature, buried in the New York Area, from the COMING SUPER HURRICANE there!

I'll bet that even a hypothetical HWA-Adorer(let's call him, "Tom"), has even had Satanic SUPER HURRICANES caused to SPLIT IN TWO as they flew around him!

I have the ideal Sponsor for this magazine...

...after all you got to wear something under that Armor!