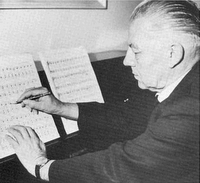 According to the grapevine, WCG has recently placed all of Dwight Armstrong's hymns into the public domain, which means they're available for anyone who wants to make use of them.

Poor old Dwight got a bad press in some quarters. His hymns were described as dirges, and there were dark mutterings about plagiarism of tunes. But I have to say, after growing up with the very real dirges of Lutheran liturgy and hymnody, I found them (or at least some of them) quite refreshing when I first started attending. There is nothing as plain awful as a badly tuned organ accompanying a badly tuned congregation singing something that should have received a decent burial in the 16th century.

As for the plagiarism: it seems to have been something of an Armstrong family tradition. The words were from the Psalms, so I guess that was okay. The tunes are apparently suspiciously similar to a Scottish Psalter of long ago. If Dwight managed to make a buck out of his brother's paranoia about Protestant songs, well, that's fine by me. I hope he at least got his tithes back.

These days it may be all praise choruses and waving arms, but the old purple book still has its charms... kind of.

5 Personal favorites:
How Excellent in all the Earth (7)
O Eternal who shall dwell (14)
For Even from my Youth O God (52)
Holy Mighty Majesty (75)
He Shall Reign for Evermore (78) - complete with a "melancholy sparrow" :)

I wonder how long it has been since they played How Love I Thy Law in a wcg service?

Uh, gee thanks Gavin! Now I have some of those insipid tunes playing incessantly in my head. I can see the songleader's arms flapping and my eyes rolling to the back of my head when I hear, "Men on verse two, ladies on verse three".
--> Charlie Kieran

Dwight may not have been without talent, but I can't confess to liking any of the songs. My pet peeve was singing "Selah" on some of them. Talk about clueless. And what was with the arm flapping anyway? I've been in an awful lot of churches in my life, and nowhere else have I seen this. It contributed nothing at all, except to make me wonder at how many variations of the pointless wave they could do.

I always loved "death shall them seize and the the tomb, alive they shall go down..." Happy Sabbath!

Or "think ye that I would eat of flesh or drink the blood of sheep...naaaaaaaaaaay, rather ...." or something like that.

The worst was the last ten years singing..."we are not divided, all one body weeeeeeee, one in hope and doctrine, one in chariteeeee"
Sure, right, no problem..yep, that's us! :)

I put "Come See the Works of God" in the favorite category. When I hear it, the classical music fan in me wants to rework it into a "theme and variations" string quartet.

Why UCG has left that one out of its hymnals, I have no idea.

My impression was not that Dwight borrowed the *tunes* from other sources, but the *words.* For example, the older grey hymnals back in the 60's gave credit to that Scottish Psalter for some of the lyrics. That credit was removed when the purple book came out.

Take a look at "All People That on Earth Do Dwell." It's almost word-for-word the same as the version that's set to the tune of the traditional Doxology. In older versions of the hymnal, the similarity was even closer.

And the arm-flapping? Why, that's just to show that the songleader is actually in charge! We certainly can't have a female piano player leading the entire congregation in song, can we??

My personal favorite? "What a Friend We Have in Jesus." It's not in the purple book, but it was in the grey book before that. Nobody can believe today that "Mr. Armstrong" allowed such a song to be sung in the Radio COG. :-)

I am pleased you made mention of the fabled song " By De Ribers of Babylon, Boney M version of course.

These songs are so much a part of my fiber (granted not the morbid tunes...but there were certainly many others outside that category). In fact, I sing them to my son at night and there is something connective about that...because he will never know the entirety of what those songs represent (thank goodness). But, despite some of the negative those songs recall...they also recall friends I can never replace...special memories with my family...and the genuine faith I held in my heart for God as I sang them. Cherish the positive...learn from the negative.

I confess I still like a lot of those old Dwight Armstrong hymns. If the libretto or even some of the melodies were "plagiarised," then Dwight Armstrong was carrying on in the tradition of many if not most musical composers of past centuries. Some of them were just awful (yes, "Let Thy Chastening Be in Measure," and also that one that went, "Ooooooo Loooooord Gaaaaaawwwwd," and mentioned that "my bed is wet with weeping"), but as I recall we hardly ever sang them anyway, since they were unsingable. As a Catholic, of course, I've discovered a whole new, unimaginable dimension in horrible religious music. At least as an Armstrongist I never had to grit my teeth through, "Hosea" or "Bread of Finest Wheat." But then, the Catholic Church also has a long, ancient tradition of inexpressibly beautiful sacred music, and I don't mind humming some of Dwight's stuff alongside some of the better Catholic hymns.

Sorry, I got the title wrong of that appallingly bad Catholic song: it's "Gift of Finest Wheat."

"Yoooooou satisfied a hundred hearts, wiiiiith giiiiiift of finest wheeeeeeat. Come give to us, O saving Looooord, a wholesome, tasty treeeeat!" (No, those aren't the real lyrics, but those are the words that run through my head whenever the cantoress bleats that songs -- all in a minor key, of course.)

Hi there. I am Deborah Armstrong, Dwight Armstrong's daughter. I would like to thank you for your words regarding my father. Not much was really known about him in the church. He was a quiet, private man, unlike his outspoken brother Herbert. He was also a kind and gentle person. He took great pride in his music and continued to write hymns while he was dying of cancer. His last hymns were not included in any of the new hymnals - possibly because Herbert Armstrong died before they were printed and the editorial staff did not choose to include my father's newer pieces.

I also appreciate the many comments regarding his hymns. There is so much bitterness on the internet because of the WCG - it was very refreshing to see that, at least for some, my father's hymns are not a part of those bitter memories...