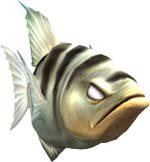 UCG minister Mario Seiglie (that's not him in the picture, keep reading) has been pounding away at his keyboard for a long time. Now the veteran GN writer has achieved a moment of fame as a paragon of family values.

I confess that I've never heard of the Traditional Values Coalition (slogan: "Empowering People of Faith through Knowledge"), but they've chosen the very knowledgeable Mario - a person of faith if ever there was one - to help slay the demon of evolution.

You'll have to forgive me. Being a New Zealander I've been deprived of the cultural resources to make the connection, so maybe someone closer to the cusp of this sort of thing can explain it to me: what do traditional values have to do with an anti-evolution stance?

In any case, here's the spiel:

In a recent commentary on evolution by United Church of God Pastor Mario Seiglie, he points out that the archerfish is so uniquely designed that it could not have evolved with slight modifications... According to Sieglie, “The archerfish offers precisely such an example [of complexity], since several complex systems must all appear at the same time, perfectly and not gradually formed—binocular vision, a specialized mouth and tongue, specialized gills to compress and expel water and an aiming system based in the brain and not in the eyes. If any of these parts is missing, the mechanism will not hit the target and no survival advantage is created."

You can read the whole thing at the TVC site. You might like to also check out a counter-opinion at the Fundamentally Flawed blog. Here's an excerpt:

The argument seems to stem forth from statements made by Mario Seiglie. Seiglie believes that this combination of complex systems in the archerfish could not have developed through evolution, as they must have developed all at once to give the fish this ability.

Is Seiglie a world-renowned marine biologist? Not quite… he is a pastor in the United Church of God. It would seem that this position gives him indisputable expertice in the field of biology.

Here's the problem with those UCG experts that write for the GN and make guest appearances on their TV advertorial shows. They're not. Want to know about the wonders of the natural world? Pick up a National Geographic.
Posted by Gavin at 17:24

What is the connection between traditional values and an anti-evolutionist stance? In US religion and politics all the following terms go together:

Take this core of ideology and wrap it in the marketing term "traditional values" and you pretty much have what this movement is about.

But it is remarkable that a UCG minister would be accepted by such a group, even in a relatively
non-theological role such as anti-evolutionist journalism. My guess is that nobody screened Mario before letting him write. One of the words that could be added to the list above is "zealous intolerance". If anybody in this Traditional Values organization discovered that Mario does not believe in the trinity, I think his tenure would suddenly end.

Why not critique the ideas in the article itself, rather than attacking the individual's credibility? That would be more reasonable.

It may be that he is quite knowledgeable in the natural sciences. The pro-evolution site talkorigins.org defends the right for "interested laymen" to contribute to pro-evolution arguments. See the last question at:
http://www.talkorigins.org/origins/faqs-qa.html