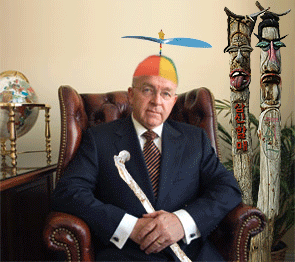 One of the more bizarre aspects of Weinland's End Game is the calling down from heaven of the wrath of his god on those who oppose him: the skeptics, scoffers and naysayers (i.e. anyone with a modicum of common sense.) Here's what Ronnie said just last Sabbath.

"If what I say weren't to come pass and I was a false prophet -- What a blessing that would be.... some of you yo-yos who like to attack and distort and twist things... And by the way I want to mention that your progression of I said would start on you is already progressing more and some of you already know it. I know of one individual specifically here not too long ago -- a little worried about their health. There are several of you out there that should be worried about your health. You think it's just coincidence??? Amazing." (Quoted on Don't Drink the Flavor Aid)

What he said at the start was that he'd call down cancer on those who mocked. Amazing indeed!

This man is a Christian? This is a man who brims over with the fruit of the spirit? This man is God's chosen servant, a minister of Jesus Christ, the leader of the Two Witnesses?

It was Bill Ferguson, the Ekklesia webmaster, who beat me to the logical inference from all this. Ronnie is a witch doctor. Bill has updated the beanie portrait to illustrate this fine, godly characteristic... very apt.

You've got to wonder though: is the guy fully compos mentis? Can his sheer nastiness be explained as a congenital character defect, or has the strain simply taken its toll on his mental health? I can only see two options: either he's a delusional sociopath in need of institutionalizing, or a calculating, tithe-farming Elmer Gantry. Initially I tended to the latter view, but now I'm not so sure...

And what does it say about those who still follow him? How could you sit through this sort of thing - as part of your Sabbath worship - and still pretend to be a begotten child of God?

Meantime "J", the author of the Shadows blog, says it best: Ronald, keep your word.

That is, if he's capable of it, and the men in white coats aren't needed first. Now there's a health issue to be concerned about.
Posted by Gavin at 15:56

I vote: metaphysical scare tactic designed to keep those in the fold in the fold no matter what. I have heard of other WCG leaders using a similar tactic every now and then, such as the old saw "I was driving around and saw so and so living on the street. That's what happens to people who leave this church!"

Isn't it amazing? The similarities between "witness" Weinland and his pissant cousin Tom, housebound with only a couple of followers, yet ready and eager to call fire down from heaven on those that don't agree with them.

Sick idiots, and an insult to God.

Gavin pondered:
"You've got to wonder though: is the guy fully compos mentis?"

No Gavin, he is not compos mentis, but he is compost mentis.