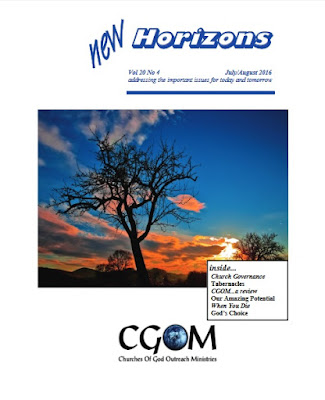 New Horizons is published six times a year by Church of God Outreach Ministries (COGM). It's old time Armstrongism somewhat toned down. While the postal address is in Tulsa, Oklahoma, the leading light in the movement seems to be James McBride, based in the UK. James was associated with Garner Ted's CGI way back in the early days, and serves as editor - obviously at distance.

This publication will win no awards for layout or design. Whoever is in charge of that needs to up-skill badly. Perhaps, to be generous, the small size of COGM should be taken into account. The ministry is supported - apparently - by only a handful of local churches and McBride's COG-UK. You'd think though that there'd be a teenager somewhere in those groups that could give the old fellas a clue as to swishing up the presentation.

Content-wise, it's not as awful as some of the slicker COG publications (which is pretty-much every other COG mag), but you get the strong sense of "same old, same old".

Hence the title of this piece. New horizons? Where, where? These old boys haven't seen anything new on a horizon for decades.

12 pages of drivel where the format hasn't been worked out so very well.

And as always there's a ...cont’d from p.4 without a corresponding "continued on page 8" on page 4.

The website is a crammed mess. Then there's T.O.D.A.Y. -- Teaching Obedience, Discipleship, and Agape to Youth, the last issue of which seems to have been created new in 2009. Seven years is quite the lapse.

And yes, they believe in British Israelism -- emphasis on British.