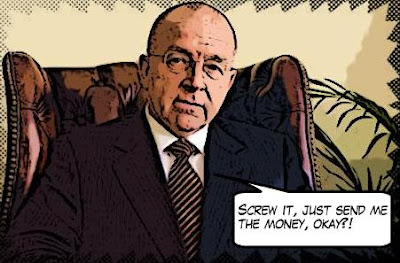 Santa has been making a list and checking it twice. Has Ronnie been a good Witness? Well, of course! So Santa has a bright, shiny new present for the lucky lad. The news is beginning to circulate as the Xmas bells chime: Ronnie is the Elijah to come.

Well, wouldn't you know it. Silly me for not realizing it straight off.

So far there are no links to "official" Weinland pronouncements, but I daresay they'll follow.

Ron, if you're out there, congratulations! And while you're basking in the glow of your new prophetic status, you might like to consider your candidacy for several other biblical honors. You could be Melchizedek or even the Logos. I mean, why should that Jesus guy hog all the limelight?

Postscript. Details on Mike's blog, and an audio link - for the masochists among us - to the relevant sermon. Exactly what Ronnie is claiming is a bit hazy. On the one hand it seems he's not going to grab the goodies, but after beating around the bush long enough to keep the sheep dizzy he states: “I am the final fulfillment of the Elijah-to-come”.

I thought Weinland was one of the two witnesses of the book of Revelation with his wife being the other witness witnessing whatever Ron says and does. Now you are telling me he’s “the Elijah to come”. How can he be both?

Do Weinland’s delusions ever end? What next? Perhaps he will claim to be Jesus Christ deceiving not too many people, but enough “dumb sheep” to give him a secure retirement.

I guess Weinland just makes this stuff up out of thin air just like Waterhouse use to, and the dumb sheep just drinks it all in and sends him their money. What a con.

Of course, it makes you wonder how the dumb sheep fools and their money ever got together in the first place for wolves like Weinland to steal it.

We've been needing some comic relief!

How it works in proper order...

"I am God's chosen minister and this is God's church"

This give Ron plenty of time to cash in and be in charge, enjoying all that his ministry offers him.

"I am a Prophet." Ron got this one out of order. This is where should have noted..'I am an Apostle."

Doing this would have given him plenty of time to cash in and be in charge enjoying all that his ministry offers him.

"I and my wife are the Two Witnesses" Got this one out of order too. It's the price one pays for trying to skip ahead. This is where he announces he is a prophet and THEN writes the inaccuarte book.

Doing this would still have given him plenty of time to case in and enjoy all that his ministry offers him.

"I am the Elijah to Come." Oh no..really out of order here. This should have come after Prophet but before Two Witnesses.

Now that the short term Two Witness gig is falling apart, Ron is going back to set his job titles back on track in the proper order. We know that no matter what happens, Ron will blame or credit God with being amazing in not telling him all he needed to know but now is coming clean on the order of things.

Ron still has a shot, if Dave Pack doesn't grab it up first and as Gavin noted, at

Logos
The "I am" (Soon to be "I was")
Son of the Morning Star (Soon to be Son...well never mind..)
Lightbringer
Woman Clothed with the Moon at her feet and stars on her head." (Nice for the Mrs. perhaps)
and of course, any or all of
Larry, Moe, Curly or Shemp.

But it will be difficult for him to recover from getting everything backwards at the start. He needed to think this through. Dave Pack is more of a planner and numbers guy and turns his title pot up increments that kinda sneak up on ya.

Ron gets a new title every month.

May I suggestion an election where the brethren vote with their feet?

"Of course, it makes you wonder how the dumb sheep fools and their money ever got together in the first place for wolves like Weinland to steal it."

The first step is believing in imaginary beings. Everything after that is easy. Why fault them? We are only talking about degrees of gullibility at this point.

If Weiny is the Elijah to come, does that mean he hasn't come yet?
When does he think he might come?
Will it be painful?

So Ronnie is THE ELIJAH.

The timing is significant.

He will never,and can never claim to being a wise man, because a person of that ilk was a semi-pagan ,perhaps part-Jewish Magi worshipping Ahura Mazda,Mithras or whatever.

The next bit gets tricky.

But,if he is already a WITLESS,the degree of apportionment that could be applied to his rationality must surely increase.

Perhaps he is a quarter retard which means he must be several sandwiches short of a picnic.This is heady stuff,you know, and not at all to be embarked upon lightly,especially when the seasonal spirit of goodwill is waxing in abundance.

Er,my mathematics regarding Ronnies' degree of handicap could be ambiguous.

He is indeed a quarter wit,meaning of course he has 75% disability.

I've got to admit Ron's circus has been pretty stale for quite a while since he announced he is an apostle. But he has certainly stirred up the audience with his new elijah act.

We will probably have to wait a few more months before he gives himself yet another title. People who can't decide who or what they are, usually get committed to some kind of mental institution, or the very least therapy and medication. If Ron was not a pastor of a church and was just wandering around the streets bothering people, I'm sure the police would be holding him for a psychological evaluation.

But because he is a "pastor" he is allowed to bother those who agree to be bothered, without consequence of the law.

Dave Pack is more of a planner and numbers guy and turns his title pot up increments that kinda sneak up on ya.

Yes, indeed, I have noticed that David Pack is coming up with more titles for himself, even though he once claimed that he had no plans to compete with Gerald Flurry in the title collecting business.

David's "understanding" in this area just keeps on growing. Perhaps he understands that to get a great crowd of followers he has to make wild claims. Simply teaching the truth of the Bible is of little interest to most people. Wild claims like those made by Joseph Smith to the Church of Moron are what gather followers.

David Pack's incremental understanding is the same as Gerald Flurry's trick of coming up with "new revelation" from time to time. The suckers who have been handing over their money for so many years are now required to keep on throwing good money after bad, or else get kicked out of the cult.

It is those who made the mistake of trusting these frauds who will get hurt--and badly! I suggest that the little people vote with their feet and their wallets and give themselves some FREEDOM from all the satanic abuse that cult leaders do in God's name.

Remember, givers have to set some limits because takers never do.

The Elijah to come was John the Baptist according to the gospels. All this "dual fulfillment" of the Jewish scribble is just so much horse pucky.

It's funny that they don't see any dual fulfillment of Daniel but they do of Malachi. That's rather inconsistant, to say the least.

Proper exegesis to the Armstrongists is to interpret the scribbles any way they like.

Try to picture a dual fulfillment of Revelation. Won't work, will it? That must mean you are not using proper exegesis.

Weinland states: "I am the final fulfillment of the Elijah-to-come." It's enough to give one hives.

Doesn't he know that Elijah is a proper name, and therefore doesn't take an article? I know of just one rare exception to the rule, that being "The Donald" (Trump). Even the Mendelssohn oratorio is rightly called, "Elijah," and not, "The Elijah." Apparently Mendelssohn knew a little more about the prophet than The Prophet knows about himself.

Saying,"The Elijah," is like saying, "The Dennis," or, "The Sam." Actually, it's a little more like saying, "the john," since in that case john isn't a proper name.

"Behold I will send you Elijah, the Prophet (NOT "The Elijah') before the great and terrible day of the LORD."

Oh well, just a little grammatical point that one might hope Elijah could figure out if indeed he were the honorable Ron Weinland, and entrusted with the crushing responsibility of saving the world from complete destruction.

Another thing. The general opinion one sees is that the two witnesses of Revelation 11 are presaged by Moses and Elijah. How then does Mrs. Weinland/Elijah fit into the Moses slot -- particularly when Moses found it necessary to send his wife back to her father during his prophetic years?

Every time one of these ridiculous cog leaders comes out with yet another pronouncement, I am reminded of a quote by William Penn; "Take care therefore, where there is more sail than ballast."

armstrongism's ship is taking on water and the members should head for the lifeboats while they still have some savings, and dignity left.

"Remember, givers have to set some limits because takers never do."

Hey T. Hall that is a great mantra .
Sure wish I had planted that in my mindset many years ago.

"Remember, givers have to set some limits because takers never do."

So simple, yet so profound.

Had I only understood this common sense principal in my WCG days, life would have been so much more tolerable.