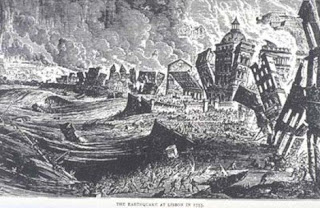 Every time something tragic occurs the ghouls gather to howl at the moon, calling us to heed, for it is yet another token of the End of the Age.

Thus has it ever been. A recent book, The Last Day: Wrath, Ruin, and Reason in the Great Lisbon Earthquake of 1755

, recounts the awe and horror that impacted on the cultural world of the West following the Great Lisbon Earthquake of 1755. It was widely believed to herald the End, and was immediately factored in to the prophetic fantasies of the time. A example can be found here. Seventh-day Adventist guru Ellen White was one who, by the peculiar "gift of prophecy," discerned special importance in the disaster for the great scheme of the Last Days.

The Lisbon Earthquake is a lesson in caution and humility. A great city was devastated, but the sun rose the next day. Christ did not return "on schedule" with the hosts of heaven. Its relevance to the book of Revelation? Absolutely zero.

The wonder is that we - citizens of the twenty-first century - can still be suckers for the same sick misuse of tragedy. The self-anointed prophets now, as then, do little or nothing to provide relief for the suffering. Instead they play a game of "told you so," and solicit funds for their own ministries. Among the more crass examples is Roderick Meredith's LCG, but there is much worse on offer including, I'm ashamed to say, a newly launched COG publication produced (badly!) in New Zealand.

Lisbon has a lesson for all of us: human suffering is meant to be relieved, not exploited.
Posted by Gavin at 06:00

"Lisbon has a lesson for all of us: human suffering is meant to be relieved, not exploited."

Excellent concept! Fundamentalists exploit natural world events and processes to falsely point to the second coming. It is the eternal carrot.

LCG and Bob Thiel do it with weather and earthquakes as well. These are natural processes that humans have ignorantly explained as the wrath of god for thousands of years.

You can get in the way of spring weather or an earthquake, but it is just being in the naturally wrong place at the wrong time.

Thousands killed in SE Asia by a monsoon is "normal" for the area. Get in the way and you may die.

LCG and Weinland are notorious for reading weather and earth science as from God. It is stupid, ignorant and meaningingless.

Matthew 24 is a ignorant statment of normal events totally unrelated to God anything.

Try this as a concept.

Ronnie the Terrible is an after the event profit, oops Prophet.
For example the recent 5.2 madrid fault earthquake,seismologist estimate every 200 yrs. the fault has a major quake. If their is one Ronnie, Gerald, Rod, Dave will be quick to claim the crown of chief prophet and profit.

Does God Respond to Blasphemous Insults?

Among the literature I have read for this newsletter, I came across some shocking stories of disasters that appear to be a divine response to blasphemous insults against God. I was planning to post several reports, including one about the TITANIC. But for the sake of brevity I will share only one report from my own country of Italy.

In the early morning (about 5:30 a. m.) of December 28, 1908, the Monday after the Christmas weekend, a major tsunami earthquake totally destroyed Messina (population 150,000), Reggio Calabria (population 50,000), and dozens of smaller nearby towns. This was the deadliest earthquake in European history with an estimated 120,000 fatalities.

Three days before the earthquake, on Christmas evening of December 25, 1908, a group of unbelievers staged in the Messina public theater, an obscene and sacreligous parody of Christ’s birth in Bethlehem. The following day, December 26, a group of citizens assembled to insult God by decreeing the abolishment of the Christian religion.

On a similar vein, the Messina newspaper Il Telefono, published on December 25, this blasphemous poem on its Christmas edition:

Translated into English the poem reads:

My small child
true man, true God
For the sake of the Cross
answer back to our voice:
if you truly are not a Myth,
crush us under an earthquake.

Three days later the most destructive earthquake in European history, crushed under collapsed building over 120,000 people in Messina and neighboring cities. Was such a destructive earthquake God’s response to the blasphemous insults levelled against Him? No one can tell for sure, but we cannot discount such a possibility.

Yeah, yeah and James Caviezel was struck by lightening three times during the filming of "The Passion of the Christ".

Time and chance and all that.

Consider this: All the Armstrongist leaders who made outrageous false prophecies so far have been wrong. Why should we ever trust them again?

And what else did they get wrong?

There's no sense listening to them any longer unless it is for entertainment purposes.

There's never any real consistency to these things -- except, of course, the failures of the Armstrongists to ever predict one thing completely right.

He's not man enough to talk to us face to face and is not given to sending unexpected blessings to whole peoples.

>>>Among the literature I have read for this newsletter, I came across some shocking stories of disasters that appear to be a divine response to blasphemous insults against God.<<<

Ha ha ha! Forgot to post a link?!
SHOCKING!!!
Do you believe EVERYTHING that comes from an SDA apologist? Or only what you want to believe?
Ha ha ha! I assume you found EXCELLENT references for this "information"!
Ha ha ha!

What's next? Someone posting stuff about the huckster Ron Wyatt who threw a old wheel into the water and then "found" the wheel and announced it as PROOF of a Red Sea crossing? Or posting about Wyatt finding the Ark of the Covenant?
Ha ha ha!

Anonymous! Dude! Remember, there's something called "reality", which you may want to check out.
Ha ha ha!

"Lisbon has a lesson for all of us: human suffering is meant to be relieved, not exploited."

Gavin, what is the new badly-produced kiwi COG publication, please? Enquiring minds, and all that...

What would we do without you?

You are indeed a source of ILLUMINATION and enlightenment in this darkened world.

Keep up the good work.

A new publication takes cog nuttiness, shall we say, to the max. But I have no particular agenda in mind.

Not keen on giving this particular feat free publicitity, but if you drop me an email I'll supply details :)

Gavin:
Thankyou, I get the McPicture :-)
Jacob's Trouble stuff I can do without.....

How could anyone think that the 1755 Lisbon earthquake had anything to do with prophecy? Everyone knows it was caused by global warming!

Anonymous! Dude! Remember, there's something called "reality", which you may want to check out.
Ha ha ha!

Why do I suspect that when things start to get bad, you will start to keep quiet--just in case. Seven times over I laugh back at at you, with three exclamation points. Ha ha ha ha ha ha ha!!!

Perhaps I used too many "ha-ha's" in response to your comment, but I've just seen so much 'bad journalism' in people trying to make such points.
And it's sad to see people willing to repeat things they hear from others, to support their own ideas, without checking to see if what they've heard really holds up to scrutiny, although it's a common occurrence.

When I see things like Falwell and others declaring that the Katrina devastation was the direct result of gayness and other 'sins' in New Orleans, I just shake my head and think Falwell must believe in a god who can't pinpoint his targets too well.
That, or Falwell is a despicable character capitalizing on disasters.

OK, point granted. Checking things out is a good idea.

The SDA Sam B. had some doubts about Hurricane Katrina being punishment from God, since it seemed to do more damage to SDA institutions in New Orleans than to the gay areas of the city.

Sam B. assumed that the SDAs were the innocent good guys in the story. It probably did not even occur to him that the SDA church is so full of official and unofficial sins that maybe God considered it to be a more important target right now than the "funny boys."