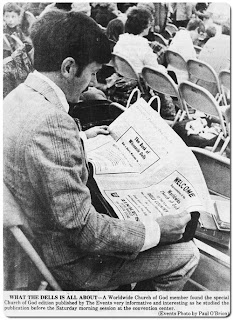 You'd have thought everything that could be said about Armstrongism has been said. But not so. Here's a selection of new resources available online.

* Over at Greg Doudna's Scrollery is a new article by Neotherm - an active contributor to discussion here on AW. Neo discusses the highly anti-Semitic variety of BI that flourished at Big Sandy which adapted the arguments created by Arthur Koestler in The Thirteenth Tribe. Neo doesn't name names, but even here in far off NZ some of us were aware of ministers who were deeply impacted by this teaching: David Robinson, author of Herbert Armstrong's Tangled Web, is one such individual who comes to mind. WCG was hugely conflicted over Judaism, but one aspect that needs to be factored in is the conspiracy mentality that existed in "mainline" BI, represented by groups such as the British-Israel World Federation which actively promoted nonsense like Gary Allen's moronic None Dare Call It Conspiracy in the seventies.

* Bill Ferguson continues to provide access to fascinating historical documents on his Ekklesia site. Recently 1975 In Prophecy! saw the light of day again thanks to Bill. Now there are two new articles, a letter by John Kiesz, a fellow minister with HWA in the Church of God (Seventh Day) prior to the latter's apostacy, and an article published at the time of the 1975 Feast in Wisconsin Dells that reveals the direction GTA's thinking was taking at that stage. Both can be accessed from this page.

If you're not completely Weinlanded-Out, there's some excellent new stuff on various blogs. Shadows of WCG is one, written by a former member of one of Weinland's WCG congregations. Her (?) reflections on Ronald's ministerial style are enlightening, as is an unmissable "open letter" to Weinland which poses the hard questions. Simply brilliant.
Posted by Gavin at 16:35

Go to http://www.khazaria.com and see how much "meat" there now is on the Khazar origins of parts of Ashkenazic modern Jewry.

For those not completely completely Weinland-ed out, here is a list of Weinland's Predictions to Date.

Henri: There is solid evidence that some portion of the Khazar population was incorporated into the larger Jewish community.

Gavin is correct in pointing out that these same people seemed to be pre-occupied with conspiracy theories. I did not have the information resources to address this aspect of the topic.

Now I lay me down to sleep
I pray the Lord my soul to keep
Fish seem fine as does the grass
Please dear Lord, Kick Ronnies ass.

I think Weinland has made it abundently clear that he is a fraud, and the truth is not with him.

If I am stricken suddenly with cancer, I'll let everybody know, but it will have more to do with time, chance and circumstances, and nothing to do with alleged mockery by my Weinland fraud statement.

Now I lay me down to sleep,
I pray the Lord my soul to keep
If I should die before I wake,
Please lord, reveal that Ron's a fake.

Now I raise me up to get
Nuther Day I get I bet
If I should die and no more grow
Died I fast or died I slow?

Now I lay me down to rest
Revelation is the Best
Tells me all I need to know
Schizophrenia tells me so.

One more Time I lay me down
Not yet smitten by the clown
Sincere he is, or maybe not
Retirement though, I'm sure he's got.

For anyone still hanging on to the last, tattered threads of BI, might I recommend Assyria and Germany in Anglo-Israelism as a good starting-point, for those with open minds.

It is important for those who support British-Israelism to believe that modern Germans are descended from Assyrians.

If the Germans of Mitteleuropa are Semites then there would be grounds for asserting that the British also had a Semitic origin.

For instance, it is possible to connect the Brits to the Germans using DNA but not to the Jews. This is a dilemma for BI advocates.

With the introduction of DNA testing, to maintain the "integrity" of the BI concept, advocates must ultimately exclude the Jews from the "nations of Israel." This would redefine the entire Semitic sphere as being the people of Northwest Europe. Same genetics, same appearance.

This resolves such difficult problems as DNA testing known Assyrians with historical bona fides in the Middle East and comparing that DNA profile with that of modern Germans and discovering that they are not closely related at all.

Eventually, British-Israelism has to move in the direction of excluding the Jews. The men at Big Sandy laid the ground work for this without knowing it. I do not imagine any of them had considered DNA testing as a factor in the future of the credibility of British Israelism. I do know that they considered the obvious difference in appearance between the Jews and the rest of "Israel" and this required revisionist thinking.

How could the Scandinavian Benjamites (Norway) possibly be related to the Jews who have a Mediterranean appearance? Why would there not be very similar genetic profiles between the two nations. After all, Benjamin and Judah were brothers born to the same mother.

In fact, in the Book of Acts, Paul, who asserts that he was of the Tribe of Benjamin, is mistaken by a Roman Centurion for an Egyptian dissident. It is odd that Paul would have a North African appearance. Then the Centurion asks him if he is Greek. Then later when he speaks to the Jews, they do not immediately recognize him as Jew until he begins to speak to them in Hebrew. Clearly, Paul the Benjamite did not appear to be a Norwegian, but was perhaps darker than the typical Jew.

At this point we would need Herman Hoeh to step in and resolve the matter by finding an ancient refence to blonde, blue-eyed people living in some remote area of Egypt or in the highlands of Greece. And to claim that the Centurion was referring to these people.

The fact is, the Centurion was thinking in terms of the people he dealt in the course of his job and knew what Egyptians and Greeks and Northmen looked like and he thought Paul was an Egyptian or a Greek. I wonder if we could find someone on the streets of Oslo who is an ethnic Norwegian and has this appearance?

Neotherm is correct in that DNA establishes that the Ashkenazi are part of world-wide(not Worldwide)Jewry.

Ashkenazi and Sephardics are related by DNA, though one author points out that European input into Ashkenazi Jewry has been largely neglected.But I hasten to add this has nothing to do with a BI connection.

I will say this,though,that y-DNA shows the Persians to be more genetically related to West Europe than the Arabs .This is as far as I will tread in an Assyrian/German relationship.The link is tenuous,at the best,between ancient Assyria and modern Germany.British history shows the ancient Brits,in part, came from Mesopotamia but that,once again doesn't prove a BI connection.

And as for Ronnie, he is so far out it is not funny.Witless Weinland Wanes.

Having read Arthur Koestler's "The 13th Tribe" several times now, I find his scholarship to be very good. I am NO lover of the U.S.B.I.P. tripe (I left Armstrongism over a decade ago).

But neither do I subscribe to the modern brainwashing that the Jewish race is "all good" while the rest of us mortals can only someday hope to be among their ranks.

As for Neotherm here, since he has the vast bulk of humanity headed for an ever burning hell fire (as he "interprets" his bible) I would be very leery of anything he comments upon. And the sad part is, he seems to be in denial about what it is he is truly preaching here.

Sorry Neo. But the only people who are truly headed for hell are people who preach what you do -- eternal damnation, for those who don't interpret the "holy books" the same way that you do.

The Church of God has always had an anti-Jewish bent.
Sometimes even anti-semitic

Don't you mean "anti-Semitic, sometimes anti-Jewish"? I think you got that bassackwards mike.