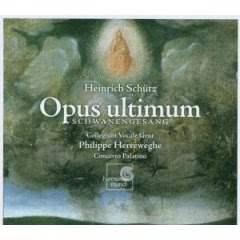 That's "O how love I thy law!" in German, specifically Heinrich Schutz's Opus ultimum, the Schwanengesang, a rendition of the tediously long Psalm 119. Performance of Schwanengesang takes more than 70 minutes, faithfully following Luther's translation, and the version I have is split between two CDs. Surprisingly, it's a joy to listen to.

Schutz was born in 1585, and this is his last major composition. It's light years removed from Dwight Armstrong's various attempts to harness the text of Psalm 119. The elder Armstrong brother took at least four bites at the task, and you can find them on pages 90 through 93 of the old purple hymnal. The music of the 1600s was something else again, difficult to describe, but, once you adjust to the style, strangely beautiful. The irony is that this particular work was only recovered in its entirety in 1970, and then performed in 1981. That may in fact have also been its premiere, for Schutz's patron, Georg II, had converted from Protestantism to Catholicism, and his musical tastes then took a decidedly Italian turn.

Psalm 119, which is a paean of praise to the Torah, seems an unlikely project for a German composer living in the shadow of the Reformation, and Luther's Old Testament an unlikely text, but stranger things have happened.

I can only say that even the least promising of the biblical texts can be transformed into something remarkable at the hands of a great artist. Whether you'll find the polyphonic pleasures of the seventeenth century to your taste (you'll listen in vain for a tune to hum!) may be judged by listening to the samples available on Amazon