No martyrdom in Milwaukee 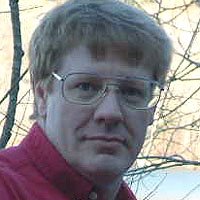 In March 2005 the COG community was shocked to its core by the shootings at a Sabbath service in Brookfield, Wisconsin. A small congregation of the Living Church of God catapaulted to international attention when a member, Terry Ratzmann (pictured), opened fire on the pastor, the pastor's family, and people who counted the shooter as a long-time friend. When it was all over seven people lay dead. Terry Ratzmann then turned the gun on himself.

It was a terrible event. The Living Church of God - a small splinter group from the troubled Worldwide Church of God - went into damage control mode. The LCG's autocratic leader, Roderick Meredith, initially seemed more concerned with the PR fallout than compassion, while the leader of the sect that Meredith, Ratzmann and his victims formerly belonged to, Joseph Tkach of the Worldwide Church of God, appeared unable or unwilling even to express the basic civility of condolences. It was almost surreal.

Now one of the survivors has privately published a book about those events, Martyrdom in Milwaukee. Thomas Geiger was there, and his nephew, Bart Oliver, was among the dead.

I want to say that Mr Geiger seems a genuine man, and the experience he relates, along with his son's, deserves to be treated with great respect. But let's be totally clear, the book's title is not accurate.

Martyrs are people who willingly give their lives for their faith. They stand tall against persecution and hatred from outside their community. Those people who lost their lives in Milwaukee were victims of an evil deed; good, decent people cut down in an apparently senseless act. They lost their lives to a fellow believer, not an enemy of their faith or a coercive state power. They were not martrys.

Thomas Geiger gives more than a first hand account; his is also a defense of Meredith's sect. The book's publicity includes this statement: "Learn... how this modern day derivative of the early New Testament Church functions, traces it's roots, and strives to selflessly serve humanity." You have to wonder just how much input the LCG's hierarchy had into this part of the book.

It seems unlikely that we'll ever know exactly what led to Terry Ratzmann's meltdown. What is certain, however, is that Ratzmann saw his church affiliation as pivotal in some way. While it is inappropriate to cast stones following such a horrific event, the church itself has a responsibility to ask some soul-searching questions about its ethos and its apocalyptic message. At the very least LCG (and other related groups) has to look long and hard at the way it counsels those dealing with depression (and reportedly discourages members from seeking outside help.)

There were no martrys in Brookfield that day in March, but there were victims. It will be a further tragedy if the Churches of God refuse to learn from this terrible experience. While Mr Geiger has every right to tell his story, confounding adversity with apologetics is unlikely to provide either enlightenment or a credible account.
Posted by Gavin at 19:52

Geiger's account of his son witnessing the shootings and his son also almost getting killed is definitely moving. I also found the entire situation a tragic experience for all those involved.

The sad part of the book is that it is mostly a defense of Meredithism/Armstrongism.

According to Geiger, the entire congregation knew Ratzman had mental problems yet not one of them ever told him to get professional counseling. Of course, Meredithism like Armstrongism looks down on psychologists/psychiatrists. Geiger talks about how Ratzman would do weird things around all the members and they would laugh it off.

I found his following excuse of Meredithism relationship to the murders to be one sad comment:

"If it truly is your position that the Living Church of God is to blame for what happened, then by that same thought process you would be forced to blame Christ's disciples for his crucifixion."

The main difference with Meredithism/Armstrongism and the disciples is that the latter group was actually following Jesus, while the former group does not. I mean, how can they? They can't even talk about him without mocking him. At least Geiger did not seem to have a problem with the crosses displayed at all the memorial services. Which stands in sharp contrast with Meredithism cult apologist Theil and his silly embarrassing tirade.

While I sympathize with those who died and those who were traumatized by this, I can't help but think of the simple Biblical term, "Reap what you sow."

The Armstrongite churches have been sowing the destruction of families, the breakdown of people's lives and hopes and has placed them in emotional, mental and spiritual bondage. They also have a certain appeal to the mentally unbalanced. I'm surprised, but relieved, that this doesn't happen more often.

Strangelly enough, one man in the LCG - Don Haynee (teacher in the LCG at the time) - wrote an open letter following the shooting asking if, after all, it was not the Church's teaching - or at least the way you put it in practice - who was the ultimate cause of the drama.

Consequences? Don Haynee was critisized and fired by Mr Meredith!

A so narrow minded leader as Mr Meredith daring to say that he is a faithfull follower of Christ, and treating a man who just dare to ask some normal questions, is indeed strange. Even Christ did not do a thing like this, yet He had a more wicked man walking with him - Juda.

Don't give Mr. Geiger too much credit for an account of what happened at or precipitated the shooting. He was NOT there. His son was there with relatives, but he was not, so there can be no "first hand account." Also, if you've read his book (which, btw, was discouraged by the LCG powers that be), you'll see it's more a "World According To Thomas Geiger" than an accounting of LCG and its innocense in all that happened.