The Good News and Judas 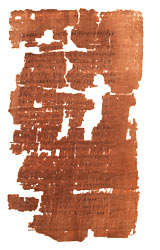 When the "James ossuary" story broke three years ago, The Good News, flagship publication of the United Church of God, was quick to join the credulous throng of ecstatic apologists. The problem is that stories which seem too good to be true usually are. Although the ossuary still has its defenders, a deep suspicion has since fallen over the authenticity of the artifact.

Contrast the cries of "hosanna" at the appearance of the ancient bone box with the chilly reception the GN team has dished up for the Gospel of Judas. Where the ossuary seemed to confirm Bible believers in the historical accuracy of their faith, Judas threatens to raise impertinent questions and unpleasant facts. But never fear, the GN has it covered!

According to the May/June 2006 issue, the Gospel of Judas was written a century or two after the death of Jesus. It serves "no useful purpose for Christians," and contains "bizarre philosophies" along with "strange and antibiblical beliefs." It is, we're assured, "the product of a strange sect" (!) and "contradicts the record of the authentic gospels..."

Although the Good News report shows the cover of the book published by National Geographic, it seems unlikely any of the lads in Cincinnati have got around to actually reading it. Let's tackle the issue of the dating of Judas for example. While the codex containing Judas dates from the 300s, we know that it has been around since at least 180. That's when one of the earliest "Church fathers," Irenaeus, mentioned the existence of the Gospel. To be widely known in 180, it had to have been around for quite a while. One suggested date is 150, which would make it contemporary with the latest of the New Testament books, 2 Peter.

Of course, nobody is seriously suggesting that Judas preserves an accurate historical account of events. It's a tale told from the perspective of Christians who were ultimately excluded from the emerging Catholic faith. And what makes an "authentic" gospel authentic in the first place? The question of how the canon was formed has always been an Achilles heel for fundamentalists who find fault with church tradition, yet somehow rely on it when it comes to what they accept as scripture.

This is amply demonstrated in the very same issue of the GN, where Don Hooser tackles The Da Vinci Code. In a section called "Truthful Quotes from The Da Vinci Code," Don takes a sideswipe at "mainstream Christianity" and the emperor Constantine. But, hang on a minute Don, why is Constantine a bad guy and Athanasius (who lived at the same time, supported Constantine and brought together the New Testament canon in its current form) a good guy?

Early Christianity basically split three ways. The Jewish Christians, led by James, continued to observe the Sabbaths, circumcision and temple rites. The Catholic Christians took a more radical, inclusive course. And the Gnostic Christians, taking Paul's teachings to an extreme (or perhaps their logical conclusion) meshed their faith with the philosophies of their time and society. The Jewish church and the Gnostics lost the battle for Christian ascendency. Every existing Christian denomination today - including the Sabbath-keeping churches - is descended from the Catholic party that adopted the present canon. Most Jewish Christians rejected Paul's writings. The Gnostics had documents which they regarded as authentic, but because they were such free spirits (in contrast to the hierarchical Catholics) its difficult to generalize about which books they prefered. It's likely that the Gospel of Thomas was more popular, for example, than Judas.

But, mindful of the way "strange sects" operate, the facts are unlikely to make much difference to the editors of the Good News.

PS. My own thoughts on whether the Gnostics were really Christian can be found here
Posted by Gavin at 23:12