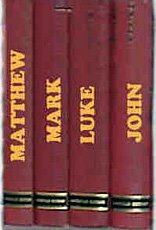 Fred Coulter certainly has a way with words. For those unfamiliar with the more obscure byways of COG Christianity, Fred is a former WCG minister who went out independently in the late 70s. He is a self-styled scholar, has produced his own New Testament translation, and runs his very own niche COGlet.

Here's a recent slice of Coulter text that took my eye in a full page ad appearing in the latest issue of The Journal: "Did You Know... The Apostles wrote the Gospels in their lifetimes?"

Profound, huh! I mean, if the apostles (was Mark an apostle? was Luke?) indeed wrote the Gospels that bear their names, then they would have to have written in their own lifetimes... wouldn't they? Or have I missed something?

Of course there is always posthumous publication, but I'm guessing that the actual writing usually occurs before the coffin is lowered into the grave... unless Fred is a secret devotee of psychic channelling (but that seems unlikely.)

What Fred seems to be maintaining is that Matthew wrote Matthew, Mark wrote Mark, Luke... but you get the picture. While that seems logical, there are a few pesky facts to take into account.

The Gospels circulated a long time before agreement was reached on who actually wrote them. Nowhere in these documents is there a direct statement of authorship (Hi, I'm John the apostle), and the titles ("Gospel according to...") were added later. Even the author of Luke, who tells his readers up-front that he's writing to Theophilus, keeps his identity to himself. The ascriptions we have are part tradition and part guesswork. Maybe they got it right, maybe not. For example, many early Christians were convinced that John's Gospel was the work of a heretic called Cerinthus. What is certain is that Paul's letters (the seven genuine ones) predate the Gospels, that Mark is the earliest of the four, and that the author of John was a different person to the disciple of that name (though he may have been used as a source).

In trying to defend the truth of the Bible it's all too easy to think the issue is the truth about the Bible rather than the truth which the Bible points to. To get hung up on the former is bibliolatry, and leads to ridiculous claims which in turn undermine the credibility of the Christian message.

But I'm sure Fred will disagree with that... and probably in his own lifetime.
Posted by Gavin at 18:34

"The Gospels circulated a long time before agreement was reached on who actually wrote them."

I'm afraid there isn't a shred of historical evidence to support that. It's true that the Gospels themselves do not identify their authors, but there is no historical record in the early centuries of the Christian religion of any doubts regarding the authorship of the four gospel, unless you count the claim of the Alogi that the Johannine books were actually written by St. John's nemesis Cerinthus. Other than that, there is no other tradition of authorship of the four Gospels than the most ancient and commonly accepted one. The earliest primary sources indicate that "agreement was reached" on the authorship of the four Gospels very early on. Indeed, there's no compelling reason to believe anyone else but the traditional authors wrote the four Gospels, which would explain why that "agreement" was so early and so widespread.

The whole concept of the Bible as being the "final authority" is suspect unless your a Roman Catholic. This was a book assembled by men of the Catholic church who had final say on what did and did not make it into cannonization.

That so many people disagree vehemently with the Catholic church yet still take the Bible as the "only" and "final" authority on Christianity is baffling.

And the argument that most give saying that, "God inspired the Catholic preists to get the Bible right," is a complete load of horse puckey. If you believe that then you must believe in the authority of the Catholic Church.

The Bible as the "only" authority of Christianity is a staggering deception that nobody even blinks at.

Jered Said, about the Bible, : "This was a book assembled by men of the Catholic church who had final say on what did and did not make it into cannonization".

Well, this claim is not necesserily true. That's what a lot of people seems to think - yet another explanation is that it's the Apostles Paul, Peter and John themselves who made the canonization or, at least, that the canonization was made largely before the Catholic Church ever existed.

May I suggest a book I read few times ago concerning the Bible question - references below. It's a Scholar study - but if I'm not wrong the writer - Ernest L. Martin had been for a time in the WCG in the 60' but quit because of disagreement with Mr Armstrong's incorrect views on some knowledge. I was not there since I was born in Brussels in 1970, so I don't know exactly what was the problems.

Yet, I like to read scholars point-of-view on the COG claims (I don't care if they are not Christians - paradoxically, I think it's sometimes a good point not being a Christian scholars). Even if I'm in one of these COG in Belgium, I applied the biblical notion of "examine everything like the Berean"... and I refuse to bow before the "leading preacher" because he say something (as a lot of people blindly did sadly with Mr Armstrong, with all the consequences after is dead - Mr Armstrong was not the problem here, but the fact that so much people blindly see him as the new apostle, or the prophet Elisha-Elija?, without examine anything he said). God is the real boss, CHrist the real chief of the Church and not men.

Hope the book will be of some interest for you and others.

Wish you an excellent day,

--------
Concerning the book I mentionned you can read it FREE online if you want at :
http://www.askelm.com/restoring/

Welcome back! This is a classy blog!

I hope, also, that the Painful Truth will be back and running in the near future.