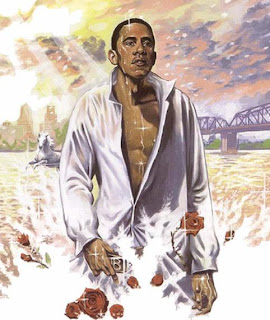 I know, brethren, that you'll be as excited as I am by the release of a new edition of Willie Dankenbring's Prophecy Flush... um, sorry, Flash.

The cover shows President Obama, but I don't think Willie intends it to be flattering. In the table of contents we're told that "The Four Horsemen of the Apo-Calypso Thunder Across the Sky." Shades of Harry Belafonte perhaps? An intertextual reference to the Last Day-o, dayayay-o? I doubt Willie is that clever - just another typo.

Continuing on his anti-Obama crusade, Willie's next article is "Barack Obama and the White Horse." This one contains what could only be called a midrash on that cover illustration. The article ends with the weighty question: "Will Obama go down in history as the world’s final end-time despot, dictator world tyrant – the Pseudo-Messiah who unites the world to fight against Christ at His Second Coming?"

Actually, Willie is good at asking questions like that. "Will a new Temple be built in Jerusalem on the Temple Mount in the near future?" Again, no. Too bad he couldn't have been spared all the unnecessary time writing the garbage that followed!

Here's another one. "Is there a BIBLICAL Calendar?"

Page after interminable page, it just doesn't get any better. No sign of brain activity anywhere.

But, what me worry. If you're into this kind of thing, hey, knock yourself out.
Posted by Gavin at 18:41

That's certainly not a bow in Mr. Obama's right hand. It looks more like a TV remote.

When President Obama met Pope Benedict XVI last week, how many COG ministers dared to cite the verse, "Een now there are many antiChrists"?

Oh my! So many questions to answer!

Or better yet: “Is it just a coincidence that President Barack has the same name as Mohammed's horse?"

Yes Gavin, there be but one man to answer these perplexing questions! Tom Mahon, where are you???

Willie's "Prophecy Briefs" is so typical of your right wing christians it gives a bad name to those who call themselves "conservatives" without the religion.

No wonder no one votes republican anymore. They are identified with story tellers, gloom and doom sayers, charlatans, and other lowlifes!

It is guys like Willie that bitch about Obama but never voted for or against him. They simply bitch and make a host of what will be more false prophecies.

Perhaps they should post opinions about the new messiah in an political forum where it belongs and leave religion out of the formula!

“Christianity will be the ruin of America" Jefferson

Click on my name and apply Willie's name to the guy in the middle.

Wet Willie is so wet he is in danger of drowning.

That guy will probably never ever get any prophetic guess right.

Nevertheless, he might have power to change the course of history, since world events will be literally forced to do the exact opposite of whatever that false prophet/false apostle/false fool guesses.