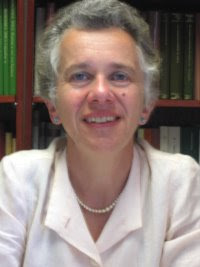 Last night I attended a lecture by Judith Lieu, a professor of "divinity" at Cambridge University. I wasn't sure what to expect, but the promotional blurb from Auckland University looked interesting.

In the century and a half after his death the apostle Paul was remembered in many different ways, as Apostle to the Gentiles, intrepid traveller, pastor, persecutor and preacher. Christians claimed his memory and his authority to address the questions that troubled them; the Paul of whom they wrote may be very different from the Paul of later Christian preaching and theology but he offers us a glimpse into a period when Christians were having to find their place in the world.

It turned out to be an engaging presentation. Lieu placed the apostle in a second century context - as he was remembered by a subsequent generation - and drew on a wide variety of both biblical and extra-biblical sources. With her impeccably English accent, Lieu demonstrated just how little we really know about this seminal figure in Christian history, and the contradictory information that survives. These contradictions exist even in the canonical documents, and raise questions many theologians prefer to sweep under the carpet. Why does Acts, for example, not refer to Paul's letters? Why were his writings ignored for decades before being rehabilitated?

A key figure in the story of Paul's rise to preeminence is the remarkable Marcion, a "heretic" who almost became Pope, and drew together the first canon of the New Testament. Marcion is one of the forgotten figures of Christian history, but it doesn't take a lot of imagination to see his fingerprints all over the "genuine" Pauline epistles. That's a view taken by outspoken skeptical scholar Robert Price, and while Judith Lieu was far more judicious in her choice of words, I could imagine Bob nodding enthusiastically and making approving grunts.

The second century casts a long retrospective shadow on the first. All may not be as it seems. To hear that from a scholar of the stature of Judith Lieu was riveting.
Posted by Gavin at 20:42

It takes a genius to start a major religion as successful as Christianity. Just look at Romans 'epistle': brilliant - it's fiction of course but nice prose.

Edited by Marcion ? Probably. We have to credit Marcion, 'Paul' and that imaginative work of fiction known as the Gospel of Mark - all three indispensible for starting this great mythic hoax that lies at the root of our Western culture.

The blurrred Apostle also failed time and again to quote Jesus when it would have served him well to do so. He tells no stories of Jesus. Refers to no miracles or teachings. The blurred one knows nothing of Jesus birth as the Gospels were written and those narratives were added long after his death. He tells nothing of Jesus trial, crucifixion, burial or resurrection save in the most esoteric of ways.

As we know, Paul never met Jesus even though he claims have been a Pharisee of the Pharisees in Jerusalem during the time when the Pharisees were supposed to be tormenting Jesus and Paul's Jesus was always the cosmic vision of the Christ in his head with the voices telling him what it all meant.

Blinding lights, voices only he can hear....and finally having to give up and admit that "all in Asia have turned aside from me." Why was that? Yet he blames them and doesn't ask any questions of himself or his methods or teachings.

James countered Paul's faith without works and Paul bashed James and of course Peter. I believe that the apostles that the Ephesian church were praised for finding wanting , "who say they are apostles and are not..." was Paul. Ephesus is in Asia Minor and would have been part of those that forsook Paul. They hated his Gentile approach to the Jewish Jameisan Church .

There never was one true coherent, cohesive true church of God from the moment the body cooled....

...However....it is Paul who is the founder of Chritianity as we know today and not any Jesus.

I would love to have been able to hear that lecture, as I am certainly interested in any insights we could glean from the life and teachings of Paul.

As luck would have it, though, halfway around the globe, and on a different hemisphere, I found myself attending the first night of a healing revival, held in our own Veterans' Memorial Colosseum.

I am a bit surprised to learn that Marcion's influence survived in the Pauline writings contained in our Bibles. I'd thought that Irenaeus had addressed and remedied much of that. One wonders how much more of Marcion's work survives in our "official" canon of today.

Amongst those once associated with WCG, there is what is known as the "One God" movement. I believe that Ken Westby is one of the chief proponents, and basically, this teaching is a form of Unitarianism, denying the divinity of Jesus Christ and the Holy Spirit. Binitarians and trinitarians who disagree will occasionally cite Marcion as having been the originator of this school of thought, although Unitarianism is also in line with the traditional thinking of those who have remained under the Old Covenant.

It is no surprise to me that the Apostle Paul was a controversial figure. This was certainly true after his death, and probably even when he was alive.

Diplomacy was not his strong suit. And, people with powerful personalities often make enemies easily.

"The second century casts a long retrospective shadow on the first. All may not be as it seems."

Eloquently and succinctly put, Gavin. Many nowadays give Paul major credit for creating/synthesizing the religion of Christianity, but there is much reason to look beyond Paul's lifetime, and on into the next century, for some of the primary activity that really served to create Christianity as we think of it. One of the "sexiest" fields of investigation within scholarship concerning Christian origins is that of trying to ascertain specifically what happened when, and who was involved. Not to mention, how did second (and third, and fourth)century perspectives color what was perceived to have taken place in the first? Jesus, the apostles, Paul, all stand just outside the clarity of historical boundaries. Things begin to become clearer several generations later, with the writings of the early church "fathers". Did their ideas have an effect on preservation/editing/redacting of the first century epistles, and the gospels? The study continues...

"Even more fascinating is the controversy over whether Tolkien intended for Sam Gamgee to carry the Ring from Shelob's Lair to Mount Doom, instead of Frodo himself. Shelby (2003) and Footwaine (1973) both provide compelling evidence that Tolkien's character build of Samwise point to the fact that it was he, not Frodo, that was to destroy the Ring. However, as Taterlee (1974, 2005) points out, this is not what Tolkien wrote and therefore the point is moot."

From "The Lord of the Rings: Was it Real??" by Shelly Warner.

Tkach's $wiss Banker said..., "all three indispensible for starting this great mythic hoax that lies at the root of our Western culture."Would you prefer atheism to lie at the root of your culture as it does in communist countries where free thinking men who believe in God are murdered? Atheism always leads to evil doesn't it? Somehow it always takes the form of some lousy socialistic ideas.

Enjoy this Brave New World free of God that you folks are getting suckered into because it will all be replaced by God's kingdom soon.

"Enjoy this Brave New World free of God that you folks are getting suckered into because it will all be replaced by God's kingdom soon."

Yes. Then begins the real Killing Fields. The blood will rise to your knees and you will rejoice in the righteous slaughter as you claim your position as ruler in the Kingdom of God. The scent of rotting flesh will arouse you as you judge and murder all malcontents in the Wonderful World of Tommorrow.

"Soon", huh? Well, you've been saying that for over 19 centuries. I bet it doesn't happen, wanna bet?

The Ghost of Stephen said...

The blurred one also said...

One does need to ask just how much you can trust the blurred one to be deaing straight with you on any topic. What does a man who will become all things to all men , or say or act as needed to "win them" really believe. Do they not eventually find out they have been snookered by the blurred one's act?

People freaked when HWA rarely if ever mentioned Jesus in his Global Gospel Tours...No wonder people forsook the blurred one eventually.

My favorite aspect of the blurred on is "when cursed, we bless and curse not" and then turns around and curses those who don't believe his rendition of the gospel...

And indeed it was his version as Peter, James and John were not really all that happy with the blurred usurper of the Jesus story.

Stephen was really the first Paul but was a bit ahead of the game when Paul stoned him for the same Message Paul would later bring himself. Maybe he liked the idea but was eliminating the competition?