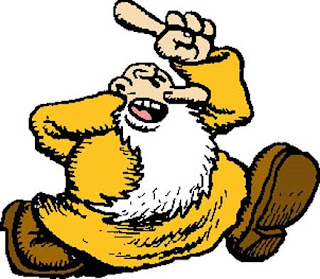 Hard on the heels of the release of the Wolverton Bible comes news that its evil doppelganger is soon to follow. Robert Crumb, the counter-culture cartoonist, is set to release his version of Genesis on an unsuspecting world. 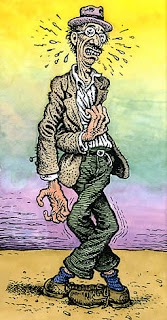 Crumb is said to have been inspired by the style of Wolverton, but unlike Basil he relished openly sexual content, and anti-establishment values. If Basil was COGwriter, then Robert would be I Survived Armstrongism. On the campuses of the seventies his artwork often appeared in student rags.

"Four years in the making, Crumb worked from the King James Bible and Robert Alter's translation to reinterpret the Book of Genesis, from the Creation via Adam and Eve in the Garden of Eden to Noah boarding his ark."

Crumb's publisher is predicting it will "provoke the religious right." I daresay it won't end up on Clyde Kilough's coffee table either.

For now I'll be content to leaf through my copy of the Wolverton Bible which, I say with some delight, fully lived up to my expectations (though the proof reading was atrocious in parts.) The article by Monte is excellent and it is a pleasure to see some content that has never appeared in print before. Long after Herb's books, booklets and articles have disappeared, I suspect Basil's cross-hatched masterpieces will continue to provoke both admiration and revulsion. At least, I fervently hope so.

"If Basil was COGwriter, then Robert would be I Survived Armstrongism."

I dunno how Russell feels about that remark, but it made my day! :-)

(Um. You could, however, have put a link ya know. Or were you being ecumenical 'cause you didn't want to link to non-doctor-Doctored-Bob??)

Okay, I repent. I shouldn't have said positive things about Earth Day.

A person doesn't have to be a fanatic but one does need to be concerned about the health of the only planet on which we depend for a living.

Don't worry, Gavin, some of us are smarter that the average apocalyptic, Jesus expecting, Bible thumper.

Apropos of nothing (again), Thielogical Bob's Passover is going to be two days out from the "mainstream" one. Proof that Living "holds fast to the truth once delivered", by shying away from celebrating the "dead" Jewish holy days, what?? :-P

I didn't know Spanky was still doing the (un)funny math.....

Thank you Gavin for the interesting polemic. What gets me is that those who are on the Spanky, et.al. bandwagon should really just love the global warming scenario. How can we forget hearing about drought and famine due to weather changes? All of that ole prophetic stuff plays more to global warming than anything you may read on the rants of those who follow that crowd. When I hear about global warming it reminds me of 1975 in Prophecy.

As far as your writing about Reagan and his presidency, you would have to have lived in the US and compared his 8 years to the time since Kennedy left the scene. There was a collective sigh of relief, although democrats would denie that. The USA was much better off after his 8 years. Clinton asked in his second run if people were better off than they were four years before, G. HW Bush was able to get in to the White House b/c of the great run that Reagan had. yes we did have the fiascos of the Agency involved in overseas involvement in other countries, but, we had that for a long time. Since Truman.

For some light-hearted entertainment:

"The Complete Blogging the Bible ... so far", by David Plotz of Slate Magazine.

All those things we thought, but were always too fearful to say out loud.

As to your "Cry Wolf" post, I must agree that the nut's are still nut's and will embrace every conspiracy theory or nutty idea that comes along the happy road toward oblivion!

The source of every solution in America has to do with money. Al Gore's cap and trade scam. Obama, the little dictator's socialization of a free country, scamming us and using trillions of American dollars borrowed from those not even born.

The truth of climate change is truth. The cause is bullshit. The money to be made is enormous.

One thing no one person has ever explained to me is why the planet Mars is also experiencing a polar ice cap meltdown? There is no way that humans can compete with nature. In the case of Mars, the suns increase in solar irradiance is the cause. Could there be a connection with Earths warming? Dah..... (It seems the Earth this last two years is cooling. Russia says we should be looking North for a Glacier)

Well maybe you could explain global warming by saying it's George Bush's fault.........

Face it, Bush lovers, just about everything that has happened since 1999 is and has been Bush's fault.

OK, enough already. No more Fox News commentaries or Air America counter strikes. Too much of that elsewhere to be bothered with it here. Comments on "Crumb Alert!" only please - or I'll be forced to inflict New Zealand political commentary on all you monocular North Americans, and we'd ALL regret that... no, really

US political commentary?? You people got nothin'. Our current Prime Minister, and most of his fellow politicians who hold the reigns of power and the purse strings in this country (despite repeated attempts to relieve them of same), are members of a cult.

What I don't get is this:
The idea that Basil used a style of cross-hatching.

But, when I look at Basil's artwork, I can't see a style which I would consider "cross-hatching"

"Cross-hatching" a style which I haven't seen in Basil's artwork, and I wonder why Monte mentions it since I would guess he is familiar with styles of cartoon drawing.

My guess is that someone telling me that "the only thing anyone could have found scary was Basil's particular style of cross-hatching", was:
Only because that person was reaching for any explanation they could find in order to make that which was put forth during the Herbie-Era WCG more reasonable and palatable.

Why do some people get so upset when we talk about religion or politics???

Boy, did you fool me with this title!

I thought you were going to comment on the Days of Unleavened Bread! :-->

It’s nice to see that Robert Crumb is doing something with his time, other than counting his millions in the South of France. I once spent six hours of my life with Crumb that I will never have back. He is indeed a fine artist, but one who has a tendency to take a decade off here and there.

Crumb did once talk about Basil Wolverton (while I was in earshot). It was at the time Wolvertoons was coming out. Everyone had a lot of hopes that the new underground exposure would lead to a revival in interest in Wolverton’s work, which it did.

I wonder if Monte and Fantagraphics are going to reprint that.

As for Global Warming, I was once a member of wonderful GreenPeace. If ever there was a lot of End of The Worlders, it was them. They kept touting the TEN SHORT YEARS until the “tipping point” for a good fifteen years that I know of.

Kscribe, our spiritual leader, may be on the money with his Mars crack, but… Cleaner air and cleaner water hurts no one. As long as real costs and incremental gains are stressed, environmentalism can be a good thing.

Wow, that brings back memories -- our university student rag was peppered with snippets of Crumb's work. I remember pondering the wisdom of Mr Natural while snickering and drooling over the stream of consciousness drawings.

Mark, I remember the panic induced by green groups similar to that of the PT. When I heard GTA's 5-minute commentaries, they were usually on environmental issues. If I read your ICG namesake correctly, looking after the earth is seen as costing the USA its standard of living, which has already been eroded considerably by other means...