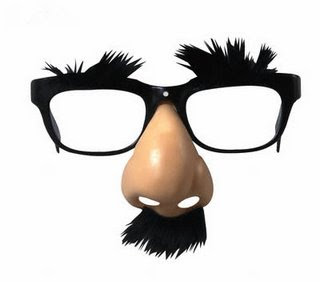 What Aggie calls the "whitewashing" has commenced as a number of Tkach-sect websites waste no time in undergoing a makeover from Worldwide Church of God to Grace Communion International.

The move is clever. We all know the sect is still Joe's stolen sinecure. Legally it's still WCG, but a new name creates further distance from the past. Those of us who are past members of WCG have effectively been cut loose a second time... we were never members of anything called Grace Communion International. Joe has put on a silly hat and a plastic nose, "can't see me!"

And it is a clanger of a name. GCI doesn't have the x-factor when it comes to church marketing. I don't think the Glendora mullahs will be too worried though, their downsized sect will continue to rake in returns on legacies and assets for a long time.

One of the interesting revelations that came out in the recent Monte Wolverton interview was that (and I'm heavily paraphrasing here) Pope Joe and Cardinal Mike put the hard word on Monte to hand over his father's Bible Story artwork to the WCG/GCI, even though he had possession. Why? Well, it's obviously worth at least thirty pieces of high grade silver. Because Basil was in church employment at the time the drawings were made, they had the legal right to demand them. Morally speaking though, it was the pits. So if you're wondering why the Wolverton Bible has all those obsequious references to Joe, Mike and WCG... look no further. This is how they treat their friends.

The point is, Joe and Mike are anything but mushy marshmallows. Behind the goofy appearance and sanctimonious exteriors lie hard, calculating men. Their Achilles heel is that they rarely get those calculations right, for which we can all be grateful.
Posted by Gavin at 23:03

They have translated the article of Mr Tkach into spanish.

I'm updating the post as I get time. Stay tuned, things are in constant flux!

"The point is, Joe and Mike are anything but mushy marshmallows. Behind the goofy appearance and sanctimonious exteriors lie hard, calculating men. Their Achilles heel is that they rarely get those calculations right, for which we can all be grateful."So true, it needs to be shouted fron the rooftops. Right on, Gavin.

I can see why Monte caved so easy; I wouldn't give up a $900K-a-year gravy train, either, would you?

As it is with politics, so it is with evangelical religion: follow the money trail.

Or, to quote that popular line from the movie "Jerry Maguire"...SHOW ME THE MONEY!

In regards to Basil Wolverton's drawings, the the other day I bought the book called, "The Art of Basil Wolverton" by Glenn Bray. It's 271 pages of Basil's work from the 1930's through 1974.


There are some great stories in the book by Bray talking about Basil and how Bray came into contact with him. One of the best things though is to find out that while Basil was drawing Herb's Bible Story pictures, Basil was also doing cartoons for Playboy!


It's too bad more people in WCG were not like Basil in their outlook on life. If they had been, especially the ministruds, the church might have accomplished something extraordinary!

How can one diffuse, purify, or render feces?

Well, there are several ways. One would be to chemically process it, and separate it into its basic elements, purifying them as you go. At the end of the process, you have powdered, liquid, and gaseous elements in various collecting devices.

Another method would be to allow the fecal matter to degrade and return naturally to its basic states, allowing time, weather, and natural processes to be part of the diffusing process. Nutrients still extant are then assimilated by other organisms, a beneficial process to life.

At some point in either of these processes, we can stop using terms like "crap", "dung", "fertilizer", or the ever popular "lawn sausages", because given enough time, they would no longer apply.

Let's face it, HWA took a mighty crap! It will take decades, or generations, to get rid of the toxicity. I don't believe that any significant or substantial good will come from any of those who were alive during HWA's lifetime, or during the lifetimes of those who were directly taught by HWA. And, I'm not sure that WCG is totally ready for its new "inert" name. Look how long it has taken the Seventh Day Adventists to shed the William Miller stigma!

Obviously, any change is better than no change. The problem is that we're still at a point in the process where it all still reeks! And, it will for some time to come. The most intelligent thing to do is to distance oneself from it, and to get close to another item with a more pleasing fragrance.

When I was a Catholic, I preferred short mass. I said there was a short-short mass that was just collection. From what I undersand, the only remnant of the old WCG in GCI is the authoritarian control.

I can't say I know the true agenda when the Joes started introducing changes. Maybe they forsaw death by a thousand splinters, leaving only the assets behind. I think a better scenario would have been to dissolve WCG except as a controlling entity, and create two divisions - WCG original, WCG ultralite.

Again with names, I remember Amway recruiting was to sell the business without saying the name - if the prospect asks, "Is this Amway?" then quietly say "Yes". Is this really the WCG? Uhhhh...

I think Tkach is doing something a bit more sinister.

First article on GCI site: "Evidence for the Resurrection"

This surprised me, I didn't know there was any evidence.

But perhaps there is and I should pay heed and become a Chritian.

So, being a fair minded soul, I read the article.

Alas, there was no evidence in this article by Tkach associate/ & millionaire huckster MIKE MORI$$ON.

I know there is a lot of bad blood on these boards around Tkach's control of the finances/property of the church. Many think Tkach (Sr.) and his gang should have just left when they "saw the light".

I feel certain now, looking back over the past 15 years, that if that had happened, all these warring splinter factions would have torn the "Worldwide Church of God" apart as well. At least with Tkach we had a "controlled" dismantling.
If the thugs who run these splinter groups were fighting over the property and finances these past 15 years, it would have made the news, and would have been a great disservice to their Supreme Patriarch HWA.

Meanwhile, some things never change: Bill Dankenbring has discovered that 144,000 divided by 666 equals 216.216216... (Check it for yourself on your own calculator.) But that's not all: apparently 21.6 is the latitude of a place in Hawaii and it turns out that Job 1:7 is surprisingly relevant to all this. See Connections in The Journal (page 24, middle of the second column).

For the first time in over 40 years of reading "church literature", I seriously entertained the thought that the author might actually be joking. Apparently not, unfortunately.

It Pays To Increase Your Word Power said...

Not sure whether you're joking about sepulchres, but if not...

"Woe unto you, scribes and Pharisees, hypocrites! for ye are like unto whited sepulchres, which indeed appear beautiful outward, but are within full of dead men's bones, and of all uncleanness."

Anon April 20, 12:41: "I know there is a lot of bad blood on these boards around Tkach's control of the finances/property of the church."

This might be a good time to revisit the New Times L.A. article, "Honey, I shrunk the church." Google finds it in microseconds.

Here's a telling quote: "More troubling to some, however, is an obscure document drawn up in June, 1987, the year after the church patriarch's death, and during the administration of Tkach's father. The document, a copy of which was obtained by New Times, amends the terms under which church assets may be distributed in the event that Worldwide ceases to exist. Should that occur, once outstanding debts are paid, the amendment gives the Pastor General exclusive ability to control the assets and to assign them to an entity of his choice."

JOSEPH TKACH & J. MICHAEL FEAZELL, the President & Vice President of the Worldwide Church of God (see www.wcg.org), will announce the renaming of their denomination to "GRACE COMMUNION INTERNATIONAL"!