Son of Rambow and playtime in Jerusalem 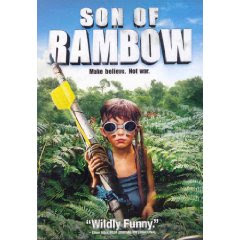 Son of Rambow: No, it's not a typo. This is a 2007 British film that's done the Sundance circuit. Set in the 80s, and produced by the same team who brought us Hitchhiker's Guide to the Galaxy, it tells of a couple of kids - one a classic tearaway and the other raised as a dutiful member of the Plymouth Brethren - who set out to make a film inspired by Rambo. Apparently Stallone himself gave it his blessing, and it's a great tale of childhood meshed with a whole lot of subtexts including commentary on restrictive religious movements. Actually, if it was a choice between the Brethren and the COGs, I'd choose the COGs every time. This film is very different, very humorous, and, IMHO, Son of Rambow

Son of Perdition: It seems Stephen Flurry has been waggling his tonsils to a suitably compliant journo at The Oklahoman, a publication that appears to have difficulty making the slightest sense of the term "investigative journalism." It seems kudos are being cast like confetti over the cult's participation - through their unaccredited college - in the archaeological dig in Jerusalem led by Eilat Mazar. The article is online. Also online are these apt comments from biblioblogger Dr Jim West.

I don’t know who this Stephen Flurry is, but if he’s looking for David’s ‘temple’ he really is barking up the wrong tree. But I bet whatever he and Eilat and the others at the site find, they will trumpet it as proof that they found exactly what they expected to find. That’s the way ‘biblical archaeology’ works- presuppositions chart the course and whatever’s found is forced to fit in. And then of course those claims are made into political statements intended to support Israeli occupation of this or that bit of dirt.

Jim is a perceptive chap. My understanding is that Stephen's only qualification for the position he holds as Dean of Students/College President is being Gerry's little boy - however if anyone can provide details of any relevant qualifications I might not be aware of, feel free to email them in.

Biblioblogger Dr. Jim West says, "the entire purpose of Mazar’s [archaeological search for King David's palace] is to legitimize Israeli occupation." And a Persian friend's passport refers to Israel as "occupied Palestine." Perhaps a chuckle is apropos to this mindset.

I think most of us know that "Palestine" was coined by imperial Rome to replace the memory of Judea with Philistines.

Conversely, the ancient Israeli psalmist wrote, "If I forget you, O Jerusalem, may my right hand forget its skill. May my tongue cling to the roof of my mouth if I do not remember you, if I do not consider Jerusalem my highest joy."

Perhaps the whole Bible and the many secular histories of Israelite peoples were ultimately written "to legitimize Israeli occupation," and Eilat Mazar is just doing her small part to add credibility to what is already considered both fact and inevitable by millions.

So many wannabe amateur archaeologists have tinkered around in Israel that the truth of any of it is long gone.

However, if you can believe that a Lord God of the universe appeared to the chieftain of a desert nomadic tribe about 4,000 years ago and gave him that land . . . Well, let's just say, you're really gullible.

If the Jews want that worthless piece of crap real estate (with no oil and rotten sand and very little water) I say, let 'em have it.

If the Christians dream of ruling the world from Jerusalem, I say, send 'em on over there.

As SmilinJack says, all that the Jews wrote in their book of fables was to legitimize the Jewish ownership of the land that they stole from the Canaanites.

It definitely is not a "land flowing with milk and honey" or where one may find bunches of grapes that takes two strong men to carry them.

The Jews in America know this, so you won't see them running en masse back to Jerusalem. Some that did go have now awakened and come back.

Those who think that a bunch of Jews living in Palestine equals Biblical prophecy fulfilled do not know the difference between Zionism and Judaism.

The excavations which I'd like to see take place are pretty much prohibited. Those, of course, would be in the temple mount area itself. And that would get to the core, so to speak. From what I've read, there are numerous passageways which were blocked and have remained unexplored, and one tradition even has it that the arc of the covenant was secreted away perhaps in that area just prior to the destruction of the first temple. The arc was absent from Herod's temple.

If the arc of the covenant ever were found, in Jerusalem, Ethiopia, or wherever, the discovery would cause many people to do some serious rethinking. I wouldn't expect it to cause the universal conversion of atheists around the world though, because I am sure some additional "reasoning" would be immediately forthcoming from that community. No doubt, Christian faith would be further bolstered.

All archaeology is instructive, but some is more significant than others. An interesting study might be the listing of all the Biblical historical characters and locations that actually have been confirmed by archaeology.

A well-known former member of the Plymouth Brethren is Garrison Keillor, of the "A Prairie Home Companion" radio show in the US. In January 2009 somebody sent him a question about his religions background, and his answer is here. Here is part of it:

I left rather precipitously when I was twenty years old, a college kid, and it was made clear to me that the Brethren did not feel that a Christian could be a journalist or a writer of fiction. So I made a clean break. The Brethren are in steep decline today, due to their schismatic nature. They believed in the inerrancy of Scripture, which made them scholars of the Bible, which brought out a prideful and legalistic side of them, and they neglected the more loving pastoral gifts and let it be a lesson to the rest of us.

The same could be said for the COGs.

Wikipedia has an article about Son of Rambow here.

Israeli "occupation" Of their own land? Of Jerusalem which is the land of those people?
Jim West sounds a bit anti semitic to me.

I have it on fair to midland authority that Stephen’s conception was immaculate. He is said to have shot three holes in one the first time he went golfing. There are few subjects under the sun which he is not a known authority. He is truly one of the most important men of this century.

Well, Stephen still is the sanest member of his church, if that’s any consolation. And his conception didn’t involve THAT much beer.

Byker Bob said...
If the arc of the covenant ever were found, in Jerusalem, Ethiopia, or wherever...

The Book says it was (conveniently)stolen by the Philistines so - it would be in Philistia - right?

An interesting study might be the listing of all the Biblical historical characters and locations that actually have been confirmed by archaeology.

Dodge City, Kansas actually does exist but that doesn't mean there was a US marshal named Matthew Dillion and his girlfriend, and saloon owner, Kitty Russell.

All stories of fiction use real places and sometimes, real names. Stephen King uses Maine in his stories - does Maine exist? So, his stories must be true then, right?

Mark, if you mean this century, that's Kim Jong Il. He has the nicest 3 hole, par 3 golf course I've ever seen.

Byker Bob wrote:
"If the arc of the covenant ever were found, in Jerusalem, Ethiopia, or wherever, the discovery would cause many people to do some serious rethinking."

Byker Bob, haven't you heard? The late self-proclaimed biblical archeologist Ron Wyatt (despite the fact that he has no credentials in the field at all) claimed to have found it, or at least the gold cover of it referred to as the mercy seat, complete with the literal blood of Jesus of Nazareth on it.

Although his website now has retracted Ron's claims he made during his excavations in the '80's.

On the general subject of “biblical archaeology,” I note that on Monday, April 6, the National Geographic Channel will air “In Search of Jesus’ Tomb,” which examines and shows the serious flaws in the suggestion of James Tabor that Jesus was buried in the Talpiot tomb. Among the special’s featured experts taking apart Tabor’s hypothesis is Joan Taylor, senior lecturer at the University of Waikato, New Zealand.

That guy was one crazy kookoo-bird!