Only the set has changed 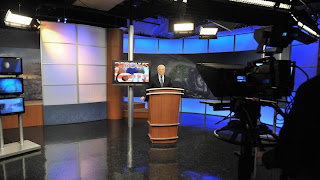 On Thursday, February 26, Dr. Meredith and Mr. Ames each taped a new Tomorrow's World telecast on the new set, in our new studio building two doors down from the main Headquarters facility. Our thanks go out to all the brethren who prayed for God's blessing on the acquisition and renovation of the new building, and the design and implementation of the new set. (LCG media spin)

The gerontocracy that rules LCG has a swish new TV set at its disposal. There are two versions, one for Dick Ames (who is still able to stand) and one for Rod, who now needs to be wired into an upright position behind a desk.

But while Rod may be only too happy to slap around his audience with a state-of-the-art backdrop, what he is actually saying is likely to be nothing more than warmed-up left-overs from as far back as the 1950s, as is clearly demonstrated in a recent post on Living Armstrongism. It seems poor old Rod hasn't had an original thought - and few original words - in decades. Talk about "holding fast"! 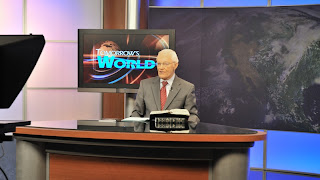 But TV sets are another matter. Image is everything, and the Presiding Evangelist certainly learned from a highly competent ad man.

The measure of any one of us as a mature, growing human being, is our capacity to change and adapt, to extend our vision and horizons. To be thinking the very same thoughts as one did thirty (or fifty!) years ago is a confession that very little cranial activity is taking place.

But no mind, it is a very attractive set...

I always liked the way that "Headquarters" becomes a proper noun and requires capitalization. Love that upper case "H", I do . . . no kidding.

It's the Head of where the quarters are - or dollars, your choice.

As cybernetic animation improves, perhaps a COG will have a Virtual Herb, in his own little 3D studio. Any chance Joe will claim copyright?

Yes, Corky, Headquarters is a great word! A good place for all the hindquarters.

Gavin as a member of the LCG I am happy that Mr Meredith has not outgrown the faith, hasn't matured into a new thinking individual and has stuck to everything taught him by Mr Armstrong. We in LCG really like it that way but did you know that there are other people accusing him of turning Pentecostal?-----just can't win for losing

I look for all the old guard of Armstrongism to die off in the near future. But they are fighting hard on the forums and in the current COGs to get their Armstrong foot in the door, and once in, they take over and teach that HWA was God's mouthpiece.
It appears that most do not see that you cannot correct a flawed system with the same leadership

Not a bad new set. I happen to prefer the new set that Jack and Rexella Van Impe have been using, but Rod and the boys haven't done a bad job.

I like to give credit where credit is due, and the fact is that they have made a marked departure from the studio blueprint laid down by their "apostle".

They really do need to update the WWII era prophecy model, though, making it all relevant to today. While the Van Impes often appear to take a light approach to this, there are others who treat it more seriously, such as Dr. David Jeremiah.

Christians from the Armstrong movement tend to be rather unique. They love their God, and tend to single source all of their spiritually oriented information to those who teach one applied religious philosphy. As a group, they generally would dismiss any information coming from groups which do not teach the sabbath, holydays, tithing, and clean and unclean meats. Yet, the fact that their chosen teachers have been 100% wrong in their prophetic interpretations in spite of retaining Old Covenant laws doesn't seem to raise the credibility issues which are needful of being raised. Due to the prophecy failure rate, and/or timetables, I would encourage COG members to do some open minded due diligence, and at the very least, obtain some second opinions on prophetic matters. There is nothing wrong with examining and reexamining beliefs, and everything to gain. Surely, some must already have doubts and questions on this topic. Unfortunately, many have stopped "proving all things" a long long time ago.

Byker Bob said that many have left off "proving all things" a long long time ago." I would disagree, most if not all COG's members have never proved anything other than what they were told to prove. That is we opened our Bible and "proved" things that making sure that the scriptures they referred to actually existed in the Bible. What we did not prove was what the Bible actually supported and what the Bible actually says through other scriptures conveniently not mentioned. Much of what was said was taken out of context of the whole chapter and out of context of the subject of the passage. Rev 3 concerning the doors is a blaring example that LCG continues to use. I have posted this before concerning Rev 3. Yet instead of studying their Bibles Anon (LCG member) continues to defend and organization. They have not proved what God desires of us. They are blind and love it.

Could we have a pic of you presiding in an a very evangelistic way at your highly polished mahogany desk,complete of course with the accoutrements of office,the pen set,the computer screen,certificates on the wall and the obligatory library in the background.

I'm working on it as we speak!

Gavin, another person who admits of having little cranial activity! That's a shame! No growth intellectually.

Do you think someone who might be tempted to join one of the "cults of personality" did a google search as to what they would find? Only the mentally ill would find it necessary to join up. But their money is green so what the hell!

When the words in MAT 24:34 were put into the mouth of the fictional character "Jesus" and there was no fulfilment to that generation, the continual failure of Biblical prophecy was assured--
yea and even down to our own time. A false prophet had uttered false words.

It has been a continual struggle ever since by futurists like the old WCG to give them some meaning other than the evident one they have. With the proper twisting the Bible can be made to teach anything, with the possible exception of atheism. (Although many atheists became that way by actually reading the Bible without interpreters).

Anyways, I am an atheist partly because of the fact of unfulfilled prophecy. Even one of the gods said we had no need to pay any attention to a false teacher. (Deu 18:22)

BTW-I quote the Bible not because I believe it but that some here do.

As my contribution to the Lenten effort, I am going to forgo watching Onkel Rodders on TV on a Sunday morning.

Anon 3:30 said:
"Gavin as a member of the LCG I am happy that Mr Meredith has not outgrown the faith, hasn't matured into a new thinking individual and has stuck to everything taught him by Mr Armstrong."

It is sad that so many are happy that Meredith has been saying the end will come in 3-5 years, and has been repeating that for at least 50 years. Doesn't that seem a tad illogical?

It just goes to show that some people have minds like concrete: thoroughly mixed up and permanently set.

"It seems poor old Rod hasn't had an original thought - and few original words - in decades."

Nor has
James Dobson,
Pat Robinson, or
Pope Benedict XVI

Anonymous [3:30 am] said...
"Gavin as a member of the LCG I am happy that Mr Meredith has not outgrown the faith, hasn't matured into a new thinking individual and has stuck to everything taught him by Mr Armstrong. We in LCG really like it that way . . . ."

I just wonder if, in 200 years or so, your LCG, still wearing 20th Century clothes and hairstyles, might not take its place alongside Hasidic Jews and Amish Mennonites as a sect of quaintly-dressed eccentrics desperately clinging to the attitudes and beliefs of a bygone era.


You'll like what they like. If Meredith and Ames Co. suddenly introduces barking seals into the program, why, you'll suddenly have a fondness for biblical instruction mixed with barking seals.
You'll do what they want you to do, though you'll see it as your own decision, and don't think any different.

Crawl back to Meredith and kiss the papal ring. Send in the tithe. Obey! Obey!

It looks like Meredith got something right for a change.

If you remember the details of the Terry Ratzmann Living Church murders, one of the details that I remember reading about was that RCM had just delivered a message about preparing for a soon coming global financial crisis. As prophesied, the financial meltdown happened. It certainly raises RCM’s “accurate prophecy” rating up to 1% (rounding up to the nearest full percentage, of course). But, to the typical LCG member, the called financial crisis probably provides some proof to LCG members that RCM is God’s end time messenger. Keep those tithes and offerings coming - and brethren let's not forget the building fund!

Seeker, when I went through Dr Martin's Tithing Dilemma papers, I downloaded the Tithing lesson from the old Correspondence Course. I see how the selected verses, directed questions and comments led the learner along a path that "proved" something different than what one would conclude from proper research. Once again, I was kicking myself again for having fallen for it before.

To Anon 3:30 who said: "I am happy that Mr Meredith has not outgrown the faith"

Seems to a lot who have left the LCG of late have done so because he feels he needs to change things. He is looking for something new. So, as he slowly turns to Protestantism, he slowly turns away those who have kept what they think is the faith.

Where is your evidence that Mr Meredith said or wrote that he is one of the two witnesses. Isn't it strange some say he is turning protestant some say he turning Pentecostal but you say he claims to be one of the witness. As far as preaching Christ he should be doing so follow the example of the Apostles. Without Christ there is no KIngdom

A follow up to my comment to Anon 3:30 Didn't you read what Gavin said about Mr Meredith ask Gavin if he changing anything he will tell ya

"Where is your evidence that Mr Meredith said or wrote that he is one of the two witnesses."

They were referring to Weinland.