King of Fierce Countenance - NOT 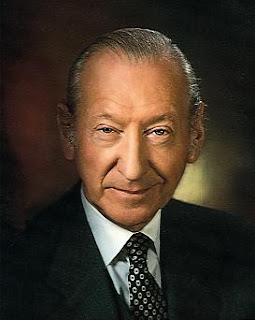 Events in Europe have certainly speeded up to a "quantum leap" into the future. A new "world empire" is beginning to arise in Central Europe - a modern "Holy Roman Empire," which is neither "holy," nor "Roman." Undoubtedly, with his stunning relations with the Arab world and its volatile leaders, and with the Pope, Kurt Waldheim will play a very significant role in that future Germanic-dominated Empire. His anti-Semitism and his personal characteristics fit him perfectly for the role of the future king of "fierce countenance" foretold by Daniel the prophet.

Kurt Waldheim, a former Secretary General of the UN, died in 1997 at the ripe old age of 88. "Undoubtedly" he wasn't the king of "fierce countenance." That "quantum leap" was evidently in a backward direction.

So who was the reckless prognosticator who fell flat on his derriere? Clue: he hasn't learned from the pratfall, and is still busily pontificating on the meaning of "prophecy." His identity is revealed next time.
Posted by Gavin at 06:00

Gerald Flurry and his Philadelphia Church of God.

"This will be the last Pope, again, according to Catholic Prophecy."

IF you wish a quick demise into the netherlands, (nether as in unterlander) just have a COG pick you for leader of Europe. Tony Blair is next.

I agree with lnrd. It sounds so like Gerald Flurry.

Was it Mrs Waldheim?

Supposedly, the "king of fierce contenance" the "understander of dark sentences" has been the POPE, according to every Christian who wasn't Catholic since the 4th century.

The pope is not and has never been a "king" but yet he is accused of being that king in Daniel and the "man of sin", the "son of perdition" and the "false prophet".

Looking back, to 89, that was the beginning years of the break away. PT, was still I believe not all that much watered down, the heavy weights were still pushing their pet past indoctrinated beliefs. It is possible that Meredith was the 3 - 5 bearer proclaiming the Rise.

Then again seems that Flurry was on his own about then also ! Was his movement powerful-enough then to make such a claim?

Ah well. What does seem poignant is the fact that 1989 was twenty years ago, and this is yet another one of those nearly generic and/or timeless ACOG flame fanning references to Europe and Germany that these people have been churning out for decades. The phrase "quantum leap" is patently ridiculous. None of their European scenarios is unfolding even today, yet they still fan the flames although the people taken in by this has slowed to a nearly immeasurable trickle. You'd think they'd update their antiquated World War II model! If they'd switch their prophecy guesses away from Europe and towards all of the Arab nations who have been Israel's historical enemies, perhaps they'd appear more contemporary, and thus have greater street cred, like GTA once did.

When HWA first publicized his prophecy theories, the Arab nations were not very prominent. While that has certainly changed, you wouldn't know it from the skipping phonograph record that Armstrongism has become.

Wouldn't be Wacky Willie Dankenbring, would it? ISTR reading a paragraph or two like that in Prophecy Flush, back in the day......

Holy Roman Empire is a Flurry favorite, while GTA usually said United States of Europe. But somehow that piece does not seem Gerry-like. Will the by line be a dark horse?

Anon wrote: "Holy Roman Empire is a Flurry favorite, while GTA usually said United States of Europe. But somehow that piece does not seem Gerry-like. Will the by line be a dark horse?"

I remember the quote word for word...But not 100% sure on who said it. Since I was never in the PCG I suppose it may not be Flurry but to me it sure as hell sounds like something he would say.

I remember speculation about this clown Waldheim being the beast back then, especially with his Nazi past.

But a sure-fire way for something not to happen would be for an armstrongite to say it will, and voila!

Allo allo, German troops will be soon be stationed in France, according to Bob T's latest post.

Anonymous said...
Allo allo, German troops will be soon be stationed in France, according to Bob T's latest post.

Uh...so? The U.S.A. has troops stationed in France also - and Germany and just about every country in the world.

Pssst - Germany is not Assyria (keep it under your hat).

Corky, to paraphrase Steve Collins, about the old WCG, we'd shudder every time a German soldier picked up a rifle. I added 'Allo allo' - a weak reference to a British comedy about German occupation in WWII France, to show I wasn't worried about about what Bob's post implied.

Sounds like Willie Dankenbring to me. Runner up would be Gerald Phlurry.

And with all this talk about France & Germany here, why are the streets of Paris lined with trees?

Answer: Because the Germans like to march in the shade.

I knew what you meant Anon Fri Feb 06, 07:38:00 PM NZDT - I just couldn't resist mentioning that Germany is not Assyria.

Germany was the boogyman from the 1930s through the 1970s for a lot of people, even non-Armstrongites.

People are still scared of those biblical prophecies that can't possibly "come to pass". Those prophecies can't come to pass because some of those people and thing they're about don't even exist anymore.

And no, Gog and Magog are not Russia and Moscow - they were those unknown boogymen of the north of Palestine in ancient times.

The Jews knew people lived "up there", in the north, somewhere, they just didn't know who they were - so they made up scary stories about "them".

The "them" was us white folks.

Whether or not 'Assyria' Germany has a long history of national socialism and expansionism - long pre-dating Hitler.

I recommend the title by Robertson: War and Civilisation, published 1918

They call me Ciscokid. Short for son of Franciscus. I descend back to Franz 2.Holy Roman emperor. He came from a line of Habsburg -Lorraine. Last one of a 1000 year Reign of HRE's.if Napoleon hadnt ended the line then a descendant of Habsburg Lorraine would certainly be the current one. Karl Franz Habsburg.there is however a political genius of this line who has the title Baron of the HRE.he he is a man of vile sin, kink.fierce countenance? Just wait.son of perdition?False prophet? That's the Popes job,but he will glorify the beast.He doesn't even realize his destructive potential yet.his wife is from a famous power line too Otto von Bismark. Sure he plagiarized his doctorate.its just a disguise because he's revealed to those with eyes and ears.wait til Russia and The U S start bedding together and the Muslims get rolling in major Terorrism.the rise will happen and it's foretold. Watch for his appointment to power thru flatteries.hes being groomed.The mighty brain of Lorraine Karl zu Guttenberg.its all so simple a child or relative can see it