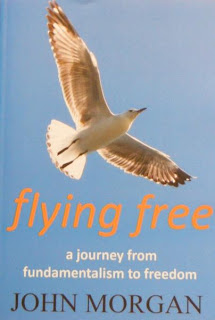 John Morgan's Flying Free is now available in large soft-cover format. Here's an edited version of two earlier posts on AW about the first edition (which was only released on CD ROM.)

John Morgan is a member of the Kiwi diaspora living in the Big, Dry Country, west of Eden. He is also a former member of the Worldwide Church of God.

He’s the latest to put his story in book form, but unlike some others he doesn't appear to have a sectarian axe to grind. He’s put together a valuable resource.

Here’s a brief excerpt from the preface:

“In Flying Free I have addressed these issues. This book contains never previously published research on Herbert Armstrong’s Holiness Quaker upbringing. It includes extensive research on the WCG’s comparison to a cult, and the characteristics that actually define a cult. There are also many pages devoted to scanned material from original WCG literature – the content of material read from an external perspective, is assimilated and interpreted completely differently to the identical documents read from within the organisation. Reviewing this material can give new insight into the journey taken by WCG members and ex-members.

“Further to this, Flying Free also contains an open-minded assessment of the origins of the Bible, the authority of the Bible, and an appraisal of organised Christianity’s influence on the individual Christian.

“Flying Free documents the impact of the Armstrong teachings on individual lives, but then goes on to show a priceless freedom – found in life beyond fundamentalism.

“Flying Free should serve as a warning to those contemplating entering a fundamentalist church.”

I've read quite a few books by ex-WCG members. Some of them have been shattering (Herbert Armstrong's Tangled Web springs first to mind) while others have been facile. In recent years I've reviewed – favourably – Pam Dewey's Field Guide (an excellent primer on American religions), Dennis Embo's The God that Prevailed (a testimony by an ex-member who converted to Catholicism), and Henry Sturcke's Encountering the Rest of God (a theological dissertation.) Good people, good books.

Then there are the less worthy tomes. These are filed away in box where I can blissfully ignore them, side by side with ancient “literature” sanctioned by the church.

Flying Free is in a category of its own. I can honestly say my expectations were exceeded. In fact I've read nothing like it before. Author John Morgan captures the spirit of growing up in the old WCG. Looking at it through his eyes put a lot of things in a fresh light, and as I read through the first chapters I found myself thinking: man, we really were weird!

I was blessed with the rare opportunity to come into the church during an atypically “liberal” period. It lasted a few brief years – an Indian Summer of relative sanity – then was swept away in the “cultural revolution” that saw Garner Ted dumped, Stan Rader facing off against the State of California and Herbert taking a final extended trip into megalomania. I didn't hang around much longer – Christ was using an extremely caustic “spot remover” to tart up his Bride, and the local minister wisely decided I was a definite liability (thanks Jack, you did me a favor!)

I mention that because one's experience of the WCG is determined to some extent by when you were actively involved. John was there long before me, as a kid growing up in the “Truth”, and stayed with the church through till the changes. With a measured style he sets about detailing his story – our story – with great fairness. Warning: if you're anything like me you'll be entering the “flashback zone.” So many things I'd forgotten about. So many fanatical teachings, so much manipulation! Being a part of the church came at a cost. If it wasn't so downright tragic it'd be hilarious.

Unlike some others, John isn't pushing a particular barrow, nor is there any sense of bitterness. It seems he just wants to put it all “on the record”, and he does a magnificent job. No nutty conspiracy theories or cheap apologetics, no strange interpretations of Bible passages, just an amazing story, all the more bizarre for its familiarity. There's also a personal touch to John's account. You can't miss the fact that this church, these doctrines, had an effect on real families, people just like you and me. The personal asides add a great deal to Flying Free.

And oh, those quotes! I'd forgotten just how blatant a lot of Herb's writing was. The thinly veiled threats of eternal damnation if we didn't do this or that. I read them again with a sense of disbelief... was I really taken in by this rubbish?

A full review can be found here, once again based on the first edition. Back then I also commented that it would be wonderful to see it appear in hard copy, and it's great that Flying Free is now available in book form. You can order a copy through lulu.com, either as a $10 download, or in paperback format at $38.95. It is expected by be available on Amazon shortly.

To repeat something I said when the first edition came out - "My advice? Get a copy."
Posted by Gavin at 14:45

I just bought it. This sounds like something that will be tremendously helpful.

I'll review it on my blog when I'm done.

I bought it too, and posted the relevant links on ISA as well.

Thanks Gavin. I do have John's book on CD, but may order the book itself, because it is hard to read a book on CD, as you may know, esp a long book.
John also is a very thorough research investigator of the Paget Report regarding the investigation into the death of Princess Diana.
I did a review for his book regarding the errors of the Paget Report, on the British version of Amazon.com

I bought it today too, and I can only concur with Gavin's recommendation. This book is something completely and refreshingly different. The way John Morgan writes is like a breath of fresh air.

Garner Ted Armstrong once wrote: "Amen and Amen! Hallelujah a few times and Praise the Lord, man!" He was being sarcastic. But I'm not. Do yourself and those you care about a favour: BUY IT NOW!

Gavin said, “as I read through the first chapters I found myself thinking: man, we really were weird!”

MY COMMENT – Yes we were weird. I grew-up weird, and when I left the cult I think that is why I lived a lifetime single and alone. Try finding a mate when you have had the WCG baggage in your brain. I had one short relationship when I was 40 that did produce a child however and it was the best thing that ever happened to me even though I am a single parent. But, in general, I was just too weird for the rest of society to relate to.

Gavin said, “And oh, those quotes! I'd forgotten just how blatant a lot of Herb's writing was. The thinly veiled threats of eternal damnation if we didn't do this or that. I read them again with a sense of disbelief... was I really taken in by this rubbish?”

MY COMMENT – Oh yes! I saved in a box many of HWA’s co-worker letters from the late 1960s through mid 1970s. About 5 years, I opened the box and re-read HWA’s coworker letters for the first time in 35 years. It made me mad to read them as HWAs own words condemn him as a fraud and false profit (oops, I meant prophet). Time was always short, and yes the threat of eternal damnation was always laced implicitly and explicitly in HWAs writings. But, to paraphrase as PT Barnum once said, “You can fool the Larrys, Tom M. and Bob Thiels all the time”

Did you read Betty Brogaard's "Dare To Think For Yourself"?

She is an ex-member of the WCG and wife of WCG church pastor, Fred Brogaard, now deceased.

Actually, Richard, starting in the '70s, weird became "in". It was a kind of a rebellion against the post WW-II yellow pencil syndrome. For better or worse, weirdness gave people a measure of individuality. The key was to surround oneself with freaks, so that one's own weirdness would seem insignificant.

Good therapy! And, culturally enriching. Fact is that artistic people have always been considered to be weird, only sophisticated terms are applied to define this phenomenon, such as "abstract", "Avant Garde", or "gauche". It's a kind of being hip. You wear your wierdness like a badge, and make it appear to be cool by applying a bit of charisma.

It's good practice for whatever comes at you in life, and makes one appreciate and savor whatever interludes of comparative normalcy one might pass through.

There is no end to writing books, especially about movements that are out of vogue and that are under attached by established Christianity.

HWA was corrupted. No question.

But the largest Sabbath keeping, Holy Day keeping, non-trinitarian movement since the third century and possibly the Cathars in France was nurtured by this corrupt leader and the old WCG.

It is a historic event of enormous proportion.

It is a significant milestone in the movement towards genuine Christianity and the search for the historical Jesus.

How much we could have saved

if Herb had been able to fly around for

Anonymous gushes: "But the largest Sabbath keeping, Holy Day keeping, non-trinitarian movement since the third century and possibly the Cathars in France was nurtured by this corrupt leader and the old WCG.

It is a historic event of enormous proportion.

It is a significant milestone in the movement towards genuine Christianity and the search for the historical Jesus.


A maximum of approximately 100k members at its peak is buried under the several billion of people on planet earth.

As far as not going away; There may always be an idiot or two around ignoring reality and continuing herbie's ways, however 99.99999999% of the world has either never heard of your movement or has moved on.


Oh but it did. And all of the WWCG's incestuous daughters are slowly, but inexorably, dwindling in number. A footnote in the history of one sect of the many denominations of the religious movement called Christianity, which is in itself a footnote in the global history of religions in general.

And the way some splinters tout HWA as being the most important religious leader of the 20th century. If you have to tell people someone was important, I think that someone was only important to a select few.