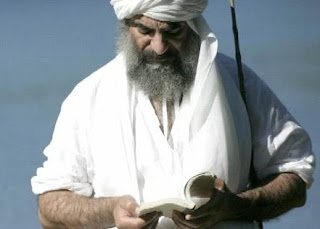 We all know the story. John the Baptist is Jesus' cousin. John baptises Jesus. John declares he's unworthy to do the deed. John is executed by Herod Antipas. John's followers come over to Jesus.

Except, not all of them did. The community of John the Baptist initially paralleled that of the early church, each eventually going its own way.

Today the Baptist's disciples still exist, and we're not talking Billy Graham, Franklin or any of those other Johnny-come-lately Protestant Baptists.

Take seven minutes out of your busy web surfing schedule to find out about the Mandaeans. Witness a baptism, meet a high priest. And be aware that these people, spiritual kin to both Jews and Christians, having survived for two thousand years are now fighting a desperate battle to keep the flame alive as we enter the twenty-first century.
Posted by Gavin at 10:00

This is a very timely link for me. I am just now learning about these people. I am only into the 4th chapter of a great book, which describes these people and defines their origin.

There are likely numerous sources for learning about the Mandaean's. I am just now reading, "The New Testament Code: The Cup of the LORD, The Damascus Covenant, and the Blood of Christ" by Robert Eisenman where the origin of these people are being discussed.

Chapter 4 "Peter as a 'Daily Bath' and 'the Secret Adam' Tradition" is following these people in great detail.

I didn't know there was information and links like the one you sent, and so am very pleased to read these things.

I must correct Chapter 4 to, "Peter as a 'Daily Bather' and 'the Secret Adam' Tradition".

They are also said to have been known as "The Nasuraia (Nazoraeans) or Keepers of the Covenant.

Thanks for sharing this. They are a fascinating group, and although I'd recommend Lupieri or one of the other recent books on the Mandaeans (I find Eisenman's views on the Dead Sea Scrolls so off target that it makes me suspicious of his other publications), I'm glad you're bringing them to the attention of a wider audience.

I just posted something on my blog earlier today on this subject, and about the Samaritans and Thomas Christians as well.

I always found it interesting how quicky John the Baptist was written out of the story to make way for Jesus. The evolution of Jesus being a student of JtB to not is fascinating.

Mark has John simply baptise Jesus as a human for the remission of sins as normal. Matthew and Luke clean that embarassment up and have Jesus baptised to "fulfil all righteousness" but of course, not necessary for the sinless Jesus. They go so far as having John the Baptist, in prison, forget who Jesus was (behold the Lamb of God) and have to ask if he was the Messiah or not? The Gospel of John drops the whole sorry tale.

Baby John may have leaped in the womb for Jesus, but forgot later, however babies leap and perceive such things from the womb...

After visiting the links to "Mandaean Associations Union" http://mandaeanunion.org/ from the article, I found loads of fantastic information.

I also appreciate the mention of Lupieri, which has led me find, "The Mandaeans : The Last Gnostics" by Edmondo Lupieri. I very much look forward to reading this as well.

Yet another exclusive club into which no one can enter: As nice as they might be, just why shouldn't they disappear from the face of the earth? They aren't following John the Baptist's teaching by inducting the repentant into their fold. Instead, they do what all cults do: Once they are established, they exclude everyone else. And now they are dying off. Well, duh!

This will undoubtedly stir up the flaming liberals to wailing and gnashing their teeth. The truth is that if the premise upon which their cult is built isn't true then their group is irrelevant. If the premise is true, then they need to turn to Christianity for salvation because John the Baptist claimed that Jesus was the Messiah and greater than he -- though, as pointed out, he seemed to have a senior moment later.

It's nice to have non combative nicely behaved neighbors and we appreciate them deeply. However, their belief system is silly and self-contradictory, not unlike many other venues we could mention in this context.

The Mandaeans have this great fear of contamination with the outside world and some of their youth might actually be corrupted. They are little lambs amongst flocks and herds of wolves. And they want the United States [one of the worst hot beds of unrighteousness in all the world] to allow them in to protect them [be careful what you ask for, we have evil corporations here]. Just wait until some of them get the taste of materialism: It is quite seductive, and if that doesn't work, then having to work for an amoral corporation should do the trick. We can all hardly wait until one of them sets up a blog critical to their own religion and a group of them joins in. All they can do is flee from one country to another until there is no place else to go.

Or we could sort of treat them like endangered species and put them in a nature preserve and take care of them, sort of like the Mountain Gorillas as they go steadily to extinction through natural selection.

Your observation causes me serious uneasiness with the Bible text in much the same fashion as does Bart Ehrman.

I am mainly interested in the Mandaeans and their literature for their historic value.

I strongly agree with your comments regarding their religion.

I rather suspect this tiny remnant and last survival of Gnosticism more likely traces its origin to the Samaritan John the Hemerobaptist, said to have been the historical and spiritual ancestor the Gnostics, not the Aaronite priest and Jewish prophet John the Baptist.