Prophet of the Seventies 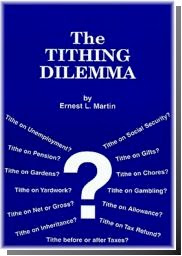 Few individuals were as influential in the 1974 exodus as former AC professor of theology Ernest Martin. His booklets were read surreptitiously by ministers and lay members alike. I even remember a sermonette given by the very proper Karl Karlov, regarded by some (poor, deluded souls) as the intellectual grunt in the New Zealand WCG, attempting to deconstruct Martin's arguments on tithing.

But please, don't get me started on Karlov, or I'll tell you the umbrella story, and we'll all regret that! I'm not sure whether even Karl understood his own anemic sermons. I gather he apostatized to UCG in Australia after relentlessly gushing about the changes in the Good News Grapevine. No, I really shouldn't have mentioned his name. Quick Gertrude, slap me quick before I carry on any fur...

As I was saying: Ernest Martin and tithing. His booklet was a huge influence in stemming the tide of tithe dollars to Pasadena. In my files is a copy of the 1979 edition entitled The Tithing Fallacy. I frankly wasn't impressed by some things he wrote, but when it came to blowing apart the abusive nonsense WCG taught on tithing, the man was a steamroller! It was the most potent counterblast on that subject I'd seen, and it's still one of the best.

But I'm wandering... it comes with the advancing years, just ask "Kscribe". Irritating I know, but just imagine what Karl Karlov must sound like now! Keep your distance with that rolling pin Gertrude!

So, Martin produced an expanded edition of that superb little 38 page booklet and relaunched it in 14 (!) chapters as The Tithing Dilemma. I haven't read it, but if it's as good as its predecessor then it's very good indeed. WARNING: the intended audience is Christian folk who take the Bible seriously, so all you Godless reprobates are sure to complain about the assumptions he brings to the task: tough bikkies (I wonder if that translates in American slang?) The reality is that the people who will most benefit from a publication like this are good Christian folk who take the Bible extremely seriously, so quit your mithering.

The good news is that this expanded version is available in full online here: check it out. Fourteen chapters is a bit intimidating, but promises a comprehensive debunking. I'm glad it's still out there, and it'd be great to think that it might continue to assist in the righteous task of draining the cash flow of the manipulative sects that claim the Herbal mantle.
Posted by Gavin at 17:26

Speaking of bringing produce into the storehouse, we personally received an erroneous receipt from none other from the United Church of God, International Association for giving $100 for the First Day of Unleavened Bread. We never gave any and haven't attended the UCG for some time -- since the time of the stalking case. Why defy Scripture to eat with the immoral man?

This brings up an ethical dilemma: Could we use this on our 2007 Income Tax Return?

I suppose it is no worse than the spurious things the xcgs accuse us of. Now Dr. Ernest Martin can salve our conscience for not paying the mandatory tithes and that's just peachy, since, as the CG7 says, it's the tithing principle.

What the heck does that mean?

Who's Kenneth Plechaty and what does he have to do with this topic? I'm confused...

Young Karl ultimately came to see the error of his ways and is no longer
a part of the WCG or its illustrious
derivatives. He now resides in a
western suburb of 'Sinney'.

Er,Gavin what is the umbrella story?

Would you deem it expedient to publish it for the benefit of we who have never heard it before?