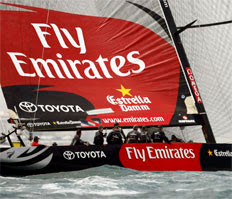 Alright, so you Northern Hemisphere types can smile, but in the great Down Under it's winter, the days are short and the audible pitter-patter of rain is persisting on the roof as I sit here at my tidy desk - despite having Beethoven's Choral Symphony turned up several notches above normal. Well, I mean, what else is there to do on a Sunday like today other than wander around looking for jobs to do indoors while listening to music?

And might I add that the news out of Valencia isn't helping things either. Half a world away New Zealand is engaging the Swiss in the Americas Cup. Staying awake till ungodly hours to watch the coverage is demanding enough, but those balmy Spanish temperatures and sunshine are cruel and unusual punishment at 2AM. To rub salt into the wound, the Swiss - or rather the rebel Kiwi sailors who went over to the Swiss - are doing far better than they deserve. By the time this goes online it may be all over, but for the moment the quislings still have to win one more.

Then, the cruelest blow of all, the All Blacks went down to Australia last night. Do I need to explain that the ABs are the national Rugby team, that Rugby is the national game, and that Australia is the ancient foe?

The yachting provides an analogy for this blog: which is just as well seeing it isn't providing much good news otherwise. Since AW reappeared in this form a bit over a year ago, both it and I have been "tacking away" from a tight WCG/splinter focus to something a bit broader. The current "series" of the long-running COG "soap" is, after all, but a pale imitation of seasons past.

Today's highlight (apart from the pleasure of discovering a desktop under piles of paper and coffee mugs) was getting notification of passes in the two theology papers I took last semester. No rest for the wicked, however, and tomorrow night the first audio-conference is scheduled for semester two's Dead Sea Scrolls paper. Among the set readings is one from someone called James Tabor titled "Patterns of the End: Textual Weavings from Qumran to Waco." I just bet it'll be heavier going than his blog entries...

On an unrelated note, New Zealand WCG member Dennis Gordon has an excellent article on Genesis and Creation in the latest issue of WCG's Odyssey magazine, well worth checking out!
Posted by Gavin at 19:02

I wondered whatever happend to Dennis, is this is the same person I knew for a short time. I believe, at that time, he was an expert in the evolution of mollusks or some small creature. Quite ahead of his time for the 70's on the AC Campus.

I would not see Genesis as such a definitive monotheistic document for many reasons. Clearly the God of the Ten Commandments was "jealous" due to the knowledge of other "real" gods in the pantheon of the gods. The injunction "you shall have no other gods before me," may also be understood as "you shall not bring any other gods into my presence," which caused jealousy.

It's a very long story the El(previously the Canaanite Deity) of the OT evolves as chief of the gods to the only God, in my opinion.

There is evidence of an earlier consort to El (Asherah) who evolved out of the picture as well leaving God partnerless, "male" and capable of taking care of all things relational himself and his own reproduction.

Again, I would refer any interested reader to Karen Armstrong's 'The History of God' for an excellent read on this evolution of the Israelite gods and the Canaanite "El"

The whole topic of "Elohim" is much more interesting than HWA's worn out explanation. (No, the "us" in "let us make man in our image," was not Jesus)

PS and I PROMISE to behave!

When El (God) noted the problem with Adam and Eve taking of tree of the "knowledge of good and evil" (not a bad thing to understand I would think) God said, "behold the man is become as one of US, the know good and evil, and now, lest he put forth his hand and take also of the tree of life, and eat and live forever..therefore...", God drove them away.

The reason is simple. Knowledge of good and evil and eternal life were prerequesites of the gods, not humans. If humans had this info, they would be as the gods, which was not going to happen. However, it was God and the other lesser gods that were concerned about this and the "one of us" El was not happy about.

Gavin, congrats on the passes, and keep plunging on ahead!

I agree with Dennis that Karen Armstrong's "A History of God" is very worthwhile reading. The idea of the O.T. God as a developing, evolving concept woven through the Hebrew scriptures, perhaps originating in Hebrew oral history and folklore, and then being more formally compiled from the time of Josiah and then especially during and after the Bablyonian exile, really opens up a lot of underlying meaniing to the vague core of historical reality.

Gavin, I envy you for your refeshing winter climate. I dislike summertime as it manifests itself across the humid eastern half of the U.S., and especially here in the Southeast (and I grew up here). I don't even particularly care for the extended hours of sunlight. Fall and winter are my favorite times (even while living in central Illinois, with lots of sub-zero Fahrenheit mornings, I loved it), and I actually enjoy short days and long dark nights. Just kind of weird that way. Anyway, you may not care for the bit of chill and the rain, but I would imagine that you do not get the depth of freezing temperatures that we get here in our own mild Carolinas winters. As I look forward to a couple of days of some relief from the high temperature/humidity combination of the last week, as a nice cold front has slightly dropped the temperature and noticeably lowered the humidity, I just have to think how nice it would be to "enjoy" a bit of your NZ winter--although I expect the rains make things pretty muddy!

Camfinch, that's exactly right. I long and wait for the day I can at least say "September" even though it's not like those in NY. I was in Rochester last week and it was 70's/50's. Then I drove back to SC and argh..I get grumpy above 78 degrees.

Gavin is experiencing the winter solstice as we experience the summer. Merry Xmas Gavin!

Not a bad article from such an odd organization.

I think "Christian Oddity" might have been a better choice of names for the WCG flagship magazine.

Which raises the question about the fate of the PT?

Whoever wrote Genesis, it wasn't Moses. Too many people and places and things mentioned in it that did not exist at the time.

Since the tower of Babel was only about 4,000 years ago and known and different written languages date back 10,000 years and more . . . well, it's not too hard to figure out for any person with at least average intelligence.

People will make Genesis as allegory more and more as time goes by. I figured the same thing out about Gen.1 as the article about 30 years ago. If you guessed that no one believed me, you guessed right.

Some folks don't know that Moses wasn't the only one placed in a little boat of rushes and set adrift in a river.

Yeah, I agree that Dennis Gordon's apparent defense of Mosaic authorship is a weakness to the article. To suggest that the Enuma Elish isn't as old as the Pentateuch is also questionable. It dates from around the reign of Nebuchadnezzar I (according to John Collins in "Introduction to the Hebrew Bible", 2004), and the Creation stories as we have them now in Genesis are much more recent than that. One indication of how recent they are is to ask yourself where Adam and Eve get mentioned in other parts of the OT. Answer? Um, now let me think, er...

Adam and Eve DO get mentioned in the Dead Sea Scrolls and the Apocrypha (Tobit) but it just seems all those worthy prophets and priests in ancient times hadn't as much as heard of them.

Maybe Dennis was trying to throw a sop to the WCG fundagelicals (a little consolation to distract their indignation), who knows?

Dennis (the South Carolina one!) hits the proverbial nail on the head about monotheism and the identity of El and Asherah (Mrs El). Alas THAT, I think, would be a bit much for even the most open-minded readers of Odyssey.

One would expect the Adam and Eve mythologies to be mentioned time and again in the OT when it would be appropriate, instead of never. But then again, one would expect Paul to mention a human Jesus and his teachings once in awhile when it would serve him to do so...which of course he doesn't.

Hard to imagine the Pharisee of the Pharisees, trained under the best of the best, far advanced above his fellows, in Jerusalem when Jesus was there, not participating in all the Pharisee vs Jesus confrontations in the Gospels and not mentioning it.

Would not Saul, a young religious hothead ("exceedingly zealous of the traditions" – Galatians 1.14) have waded into those multitudes to heckle and attack Jesus himself? Would he not have been an enthusiastic witness to Jesus' blasphemy before the Sanhedrin? And where was Saul during "passion week", surely in Jerusalem with the other zealots celebrating the holiest of festivals? And yet he reports not a word of the crucifixion?

Paul never heard of a Gospel human Jesus and the Gospels never heard of the Great Pharisee Paul. It was up to Luke in Acts to tie them both together as one big happy likeminded family...er, um...did't work.

As Dave Pack would say, this is another big change in WCG doctrine. They should have thought twice before going down this road because now they are saying there was no literal Adam and Eve,(thus no Fall of Man and therefore no need of a complementry "Second Adam" to atone for mankind), no Noah, no universal flood.

While they're at it they might as well throw out the New Testament too because its theology assumes (and mentions) a literal Adam, Eve, Noah which was a reasonable assumption in pre-scientific times.

So if we see Gen 1 being taken literally as late as the era of the evolution of the christ myth, how can Tkach and his Cruise Ship buddies tell us that "Moses" never intended us to take it literally ??

"All Blacks went down to Australia last night"

So sorry - but what can we do when we are so good!!

When Switzerland has won two AMERICA'S Cup trophies in a row, truly the pride of U.S. power is fallen. IS FALLEN! The European invasion could happen almost any day now.