From the original AW: Beware the Anti-Christs!

This piece originally appeared five years ago - part of the editorial series "Southern Exposure." Karen Ray still has a website up, but the article refered to has since been pulled. 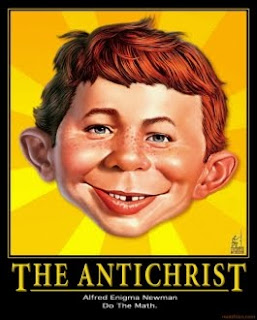 Did you know that Herman Hoeh was an atheist and an anti-Christ? It came as a surprise to me too. A bigger surprise, though, was to discover that I am as well.

Okay, so let me explain. Karen Ray, a former ghost-writer for Dave Pack, decided to list all those dangerous folk who were wicked atheists and unbelievers on her website: Darrell Condor, Herman, Dennis Diehl... And there was my name – no doubt about it – and no less than 36 quotes (I counted them!) to prove the point. I don’t want to boast, but Dennis only rated 3 quotes, so if we get demoted to the Two anti-Witnesses I want it clearly understood that I’m in charge!

Naturally, Karen is entitled to an opinion, and having expressed a few of my own I’m not averse to other folk doing the same. Sauce for the goose is sauce for the gander. But anti-Christ?

Only 5 of the 36 quotes provided were actually mine, and 4 of those were comments about various books Karen judges to be beyond the pale. 28 were from reader reviews on Amazon, the remaining 3 came from others who had contributed to AW.

So let me confess right from the start that I’ve read John Shelby Spong’s Rescuing the Bible from Fundamentalism. It’s a provocative book with important things to say. If that makes me an anti-Christ, so be it. Do I recommend it? Yes. Does that mean I agree with everything Spong has ever said? Hardly.

And yes, it’s true, I also once recommended Living in Sin by the same author. Not “living in sin” as such, you understand, but the book of that title. I have taken the time to read it, and not just react in knee-jerk style. I doubt this fully qualifies me as an atheist though.

Having admitted to these depravities let me shock you further. I have a copy of The Jesus Mysteries on my bookshelf. Here’s what I once wrote:

The case is put strongly, and builds on the work of scholars like Elaine Pagels. While the authors are not specialists in the field of Historical Jesus/Early Church studies, they have produced a well documented and tightly argued case that can't be dismissed too lightly. This book will reach an audience not usually exposed to concepts like these, and it seems to mesh in several essentials with earlier studies. After completing it I had the same mixture of astonishment and conviction that I felt after reading Ellegard's Jesus—One Hundred Years Before Christ. If you want a swift kick in your Christian comfort zone, this is the place to start.

So I am certainly guilty of saying that the “case is put strongly”, as indeed it is. I did indeed say that the argument offered “can’t be dismissed too lightly” – a very wicked thing to admit. And I did offer the thought that it would administer “a swift kick” in the Christian comfort zone (I bore the bruising for days!)

But I’m not sure that means unqualified approval or agreement. If it does, I'm embarrassed, for I do have problems with some of the authors’ arguments. Then again, apparently I'm an atheist, which also comes as something of a surprise, but maybe the word means something different where Karen comes from... but let's not quibble, there are yet more books to burn!

Yes, I have read Ellegard’s book (it’s sitting next to The Jesus Mysteries and glowering down on me at this moment). It's a fascinating reconstruction, but highly speculative. Alas, just referring to it is enough, it seems, to lead to reprobation. A History of God (Karen Armstrong) is notably absent from the shelf though. I lent it to a relative and, well, you know how it is with books you lend to others… still, it's a mind-stretching book, and well worth the effort.

I’m also guilty of mentioning a book called Remedial Christianity. And so I did, based on a recommendation from a reader, but I haven’t got around to reading it myself yet.

Then there’s (and this is the last one on the list of subversive literature) a New Testament translation I mentioned, but never got around to reviewing, called Good as New. This is the clincher in the case to declare me an atheist and anti-Christ. The translator is a Baptist minister (John Henson) and the foreword is by Rowan Williams. I suspect Karen is unaware that Rowan Williams is indeed a celebrated atheist and anti-Christ in his own right – he is the current Archbishop of Canterbury.

But then I doubt Karen has actually read any of these books.

In any event, this ends the case for my infamy. But why stop there? I have even more terrible volumes in my possession: a biography of Joseph Smith, Mystery of the Ages, a gaggle of books by F.F. Bruce, the Book of Concord (Lutheran Confessions), and (gasp!) every single book in the Harry Potter series… now I wonder what someone might do with that information.
Posted by Gavin at 20:50

"If you want a swift kick in your Christian comfort zone, this is the place to start."

I think the Bible is a good place to start. Go back and read the promises of answered prayer...

"And Jesus answered and said to them, "Truly I say to you, if you have faith and do not doubt, you will not only do what was done to the fig tree, but even if you say to this mountain, `Be taken up and cast into the sea,' it will happen. "And all things you ask in prayer, believing, you will receive." (Matthew 21:21-22 NAS)"

I've tried this one out, my prayers for many years were earnest and I believed, yet they weren't answered.

Don't squirm and qualify your reaction to my statement with nonsense about God's will. Scroll up, reread the promise.

Then ask yourself why god doesn't heal amputees. Why are all the healings we hear about also quite possibly not healings.

Show me some limb regeneration.

I suspect Dr. Hoeh, finding himself in the broiler of WCG opted emotionally for the Buddhism he seemed to to find some personal peace in. That's what I did even as a minister by first reading The Way of the Peaceful Warrior and then The Tao of Pooh. Simple books lead to profound perspectives.

John Spong, hated by the conservative Episcopalian and loved by the liberal was in touch with me when I was reading Rescuing the Bible From Fundamentalism. That book freed me from the questions and contradictions of the Gospels I had noticed in life but had not explanation for. John thanked me for using his material, especially the Birth Narrative material coupled with Raymond Brown's, Birth and Death of the Messiah tomes, and then added "however you won't survive."

I was terminated six months
later..ha. He knew...

I imagine if we were somehow able to get a list of books that COG ministers have read on the origins, theology, contradictions , hisotry etc of the Bible it would hover right around zero.

I think any book a WCGracie Minister reads has to promote the polytheism of the Triune God in a way that makes you end up saying..."huh?" That means it is spot on....

Haven't heard from Darrel in a long time but in the short time I was in touch with him, he is a formidable foe to a fundamentalist.

If you haven't enjoyed a romp through Archarya S and her series on The Suns of God etc, where she shows the journey of the SUN through the 12 signs of the zodiac is identical to the one year journed of the SON with his 12 students, enjoy! Everytime you see the sunrise, venus rise or arrive at at a solstice or equinox, you'll think very differently about the origins of the Christian religion and the shenannagans of the church as well. Or not....:)

I remember going to the Fuller Theological Lib. near AC, as a student, to read and found an excellent book on the stories surrounding Jesus birth and how fighting the probable fact of being born of fornication etc was important for the church to counter...thus the birth narratives werre inserted.

Someone was knocking on my head and I didn't answer at that time. I guess when the student is ready, the teacher will come.

I am not anti-Christ or Jesus.

I am dis-illusioned and who wants illusions?

I am no fan of Henry Makow, but this is a disturbing thought....read it carefully.

Those Harry Potter books in your possession worry me.

Witchcraft,warlocks,wizardry,
thaumaturgy and all that sort of thing.

"Then ask yourself why god doesn't heal amputees."

And remember folks, God refuses to heal amputees not most of the time, but EVERY time. He has NEVER answered a single amputee prayer.

Why is it that every single "miracle" is either incredibly subjective and/ or unverifiable, or something that can be rationally explained, even though it may be highly improbable? Why are there no verified miracles that can only be attributed to the supernatural?

Why can God make a brain tumor vanish, but can't replace a leg, or an arm? Why does God gently push motor vehicles over railroad tracks, or send a wind to push someone just as they stray to the edge of the roof, but can never actually levitate a car, or levitate someone who has already fallen?

It was Rowan who minced his way on stage with John Cleese and cried sacrilege at Monty Python's Life of Brian movie. He played schoolmaster to John Cleese and Michael Palin - and promptly got scewered by Palin on live British TV.

He saw no humor in the movie. I suspect neither would Ron Weinland!

I am no fan of Henry Makow, but this is a disturbing thought....read it carefully.


Wot, Dennis Diehl and Gavin didn't make the list? I'm sure he's as reliable as Weinland's ghost writer is! Anti-Christs have to be in that club too don't they?

Groucho Marx said "I'd never be a member of any organization who would would have someone like me!" So that leaves out Groucho for sure!

I was reading the Catholic book of Saints. Most were 'martyrs' dying painful deaths for their Roman cultmasters (who lived very well, like GCI leaders do today).

The early saints suffered under 'pagan' Rome which was fine, but what I couldn't get was the ones in the Middle Ages who were butchered by Protestants. I don't get it, can you be a martyr when you are killed by a Christian who has a different take on the same contradictory 'holy book'? Does that count ?

"...but what I couldn't get was the ones in the Middle Ages who were butchered by Protestants..."

Er, do you mean during the early modern period? Protestantism, via Luther, Calvin, et. al. arose during the Renaissance, which historians neatly class as the beginning of the modern era. Although much Christian-on-Christian persecuation and slaughter has continued on into contemporary times, hasn't it? A valid question, $wiss Banker--who is the martyr??