AW comes to an end

This is the last posting to appear on AW. After more than eleven years - beginning with a very small website on Geocities, then moving into a fairly massive site under its own domain before finally being downsized into this blog - AW is bowing out.

But, don't worry, some relevant content will still appear over at Otagosh, which has a broader focus than AW. If anything of significance in the crazy world of COGism crops up, I daresay it'll get a mention there. I'm still committed to commenting on events in the Churches of God, albeit a little less obsessively. But there will be no blog specifically dedicated to news of GCI and its splinters - unless of course someone else cares to take up that task.

Otagosh is a little different. For one thing it will continue to take a wider view, reflecting my passionately held belief that the problem isn't just with the dying world of Armstrongism, but with fundamentalism, evangelicalism and conservative Christianity in general. Unlike many of those who comment here however, that doesn't mean - for me at least - a rejection of either the positive side of Christianity or the fruits of biblical scholarship, any more than spurning quack remedies means rejecting medical science. 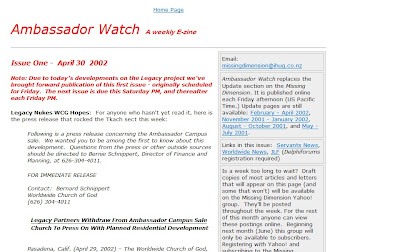 I invite you to update your bookmarks to Otagosh. I'd also like to thank those of you who've been part of AW in various ways, perhaps simply by coming back again and again, perhaps by contributing your own thoughts as comments. It is an almost impossible task to adequately list those people who have had a special role in making AW what it has become, but it required a team approach for one guy in New Zealand to keep abreast of events half a world away. Membership in that small team has been fluid, and most have been keen to preserve their anonymity, but I owe a particular debt of gratitude to the correspondent formerly known as Dateline Pasadena.

AW has been quite a journey, but it's time to turn some of my limited time and energy into other channels. I don't believe there's much more to say here, in this format, that hasn't already been said - much of it many times. After eleven years I'd like to think I've earned my parole!
Posted by Gavin at 17:00