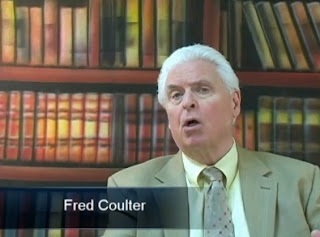 Church at home. It reminds me of the cartoon where the kid, about to be dragged off for services, asks "if I can be home schooled, how come I can't be home churched?"

Greg Albrecht has made this a speciality with PTM. Not a particularly successful speciality, judging from the "I'm eating beans" begging letter he sent out last year, but he gets a B minus for effort.

Now along comes dour old Fred Coulter, staring down the barrel of the camera and practising his humorless speech techniques. Yes folks, welcome to churchathome.com. Here you can view the Grate One (nope, that's not a typo) preening for the camera. None of this limp-wristed five minute stuff, Fred certainly couldn't restrict himself to that. Here you get a near thirty-minute monologue, chock full of Fred's rambling, ill-tempered pontifications. British-Israelism, law-keeping, the deception of "born again" and promos for Fred's very own "translation" of the Bible (a mere $119 - quite the bargain!) Are we all excited? Unless I'm much mistaken, Fred has spent a good deal of tithepayer moolah on this one, but making the team at Vild Productions ecstatically happy.

Fred left WCG shortly after Garner Ted Armstrong was booted, circa 1978. He initially founded the Biblical Church of God then, apparently after a spat, walked off to found the Christian Biblical Church of God. Listening to some of his stuff on the new website it's apparent that he hasn't learned much since. Frankly, you're probably better off with Greg.
Posted by Gavin at 16:38

"Uhhh - camera one? Tilt down and pan right!"

It was only a matter of time before Televangelists hit the green screen.

But you'd think if you're going to go virtual props, why not Jerusalem, beautiful mountains or the bridge of the Star Ship Enterprise instead of a cheesy graphic of a bookcase.

The voice at Vild Productions is umm, over the top a bit.
Maybe they need to rename the site Vild Seductions?

"Frankly, you're probably better off with Greg."

Greg is as much the lying scumbag as Fred !!

Funny, that he and his was reduced to eating beans, when PTM had a million bucks 'public support' in 2007.

Anonymous said... Greg is as much the lying scumbag as Fred !!
---------------
What proof do you have of this statement? Greg Albrecht is a humble servant of God and has freed many from the shackles of legalism. Greg is to be supported, as the core posting implies -- "You're better off with Greg."

If you would like to support Greg Albrecht's great work, here is a link to do so... https://www.ptm.org/uni/Donation.htm

I watched a bit of one of Coulter's videos.

The production quality of his videos are just slightly above that of Dankenbring's cheap little YouTube presentations.

If I were the God of the Bible - whom these jokers claim to represent - I'd be downright embarrassed! Supposedly I'm the Creator, Sustainer and King of the universe, and I can't do any better than this?

Someday we will learn that earth is the Insane Assylum for the Solar System and the occasional UFO sighting are simple incursions into our time and space to drop off more patients.

If I were the God of the Bible - whom these jokers claim to represent - I'd be downright embarrassed!

Gort wrote:
"Someday we will learn that earth is the Insane Assylum for the Solar System and the occasional UFO sighting are simple incursions into our time and space to drop off more patients."

Actually, the specific instructions are probably something similar to:

"Deposit patient within a fundamentalist religious group - offshoots of the old WCG, for example."

Scott A said: "You're better off with Greg."

Maybe you are better off but only thanks to a very low bar.

I was 14 years old when I went to my first WCG church service in Boise, Idaho. Fred Coulter was the pastor and I remember him giving a sermon which about the universe. I had never head that topic in church and got bit by WCG that day....the rest is history

Frankly, you're probably better off with Greg.

Gavin, would you consider amending to:
"Frankly, you're probably less worse off off with Greg."?

"What proof do you have of this statement?"

Click the link. Here it is again if you cannot be bother to scroll up.

Or if you are too afraid to click to link and get the REAL Plain Truth here are the numbers contained in that linked IRS document:

Compensation of the Five Highest Paid Employees Other Than Officers, Directors, and Trustees

Any further questions Scott A?

The salaries you list are really quite modest. "The laborer is worthy of his hire." And the build-up of assets was quite prudent, given the challenging economic environment of 2009 and the need for reserves.

God looks out for his work!

These are definitely NOT high salaries, although there appear to be some on this board who seem to think that $100,000 supports a "lavish" lifestyle.

They ARE lavish salaries and are NOT worth the amount of work being done (read, NONE), and almost one hundred and twenty thousand dollars is NOT worth saying "we are poor and eating beans".

If that lying scumbag Greg Albrecht is poor and eating beans whilst making one hundred and twenty thousand dollars a year either they are mismanaging the money or he is lying.

Which one is it Scott A and Larry? Or IS Scott A, Larry, and vice verse?)

Why is Plain Truth Ministries and Grace Communion International not member of the financial accountability group bloggers keep asking about?

Remember Anonymous 11:21, "Dr." Larry once boasted to me in a previous blog:

"If I really wanted to make you mad, I would show you my tax return."

So to Larry - a PhD scientist educated at a "world-class university" whose work saves many peoples lives (at least these are all claims HE has made at one time or another here on AW) - $100,000 is mere chump change.

Kind of odd though, that in spite of all these self-proclaimed (and completely unsubstantiated) assertions about himself, Larry just can't seem to reason and write beyond the level of an 8th grade teenager.

Strange - unless Larry's frequent boasts as to his academic, professional and financial accomplishments are only meant to impress us bloggers and therefore total delusions in Larry's mind.

Odd how Larry will seemingly stoop to anything in order to prove to us how brilliant and successful he is - anything except reason and communicate with clarity and intelligibility, or demonstrate even the most elementary familiarity with the scientific method.

But then again, he is a supporter of GCI, so I guess we shouldn't be all that surprised since these folks are often given to “flights of fantasy.”

"These are definitely NOT high salaries, although there appear to be some on this board who seem to think that $100,000 supports a "lavish" lifestyle."

What are you, a CEO of a major company? These salaries, for the work involved (promoting belief in imaginary beings), are very high. As an entry level research professor, I'll have the same salary as the "Art Director", and that entails busting my ass in the lab 50+ hours a week doing research, plus associated teaching and faculty duty. It's not necessarily a complaint, but to put things in perspective.

What do you consider "lavish?" $100,000 a month could easily support a "lavish" lifestyle; but then again, I am of peasant stock, so my tastes may not be as refined as those of the WWCG/CGI Ruling Class.

Leonardo, I am new to this blog and am dumbfounded by your vitriolic attack on Larry. I don't know your history with him, but while you claim to be a reasoned person, you almost exclusively engage in argumentum ad hominem. Why?

And Anonymous 11:21, if Greg eats beans once and a while, it does not imply he is poor. It implies that like most people he cut back some during the difficult environment of 2009. And, by the way, I have no clue who Larry is!

Anonymous said... "What are you, a CEO of a major company?"

While some may think that Greg dispenses garbage, others obviously disagree.

Scott A., as someone else suggested above, are you sure you aren't Larry just blogging under another pseudonym?

Scott A. wrote:
" I don't know your history with him, but while you claim to be a reasoned person, you almost exclusively engage in argumentum ad hominem. Why?"

Because Larry has made numerous boasts about being a well-known, professional scientist with a PhD, (while refusing to provide evidence of this claim) - and yet doesn't seem able to reason beyond the level of a fundamentalist. This was made remarkably clear during the recent heated exchange over the creation/evolution controversy.

Many of us here on AW, not just me, have our suspicions about Larry's frequent and totally unsubstantiated claims and flights of fantasy – a person’s words being the true index of their intellectual processes, etc.

A frequent blogger here, Apostate Paul (Ray), is working toward a doctorate – and in his comments clearly comes across as articulate, well-read, and extremely conversant with scientific concepts. In other words, he thinks and communicates like the scientist he is in the process of becoming.

On the other hand, Larry, who already claims to actually BE a scientist, consistently does NOT think or write like one.

If you really want to understand you can take the time to read past blog topics where Larry and I have had discussions, and you’ll find that he will virtually never directly address the subject, but instead make little quips, claims, assertions, etc. anything to avoid having to deal with the topics directly - something you'd typically expect from an uneducated supernaturalist who supports the likes of religious con-man Joe Jr., rather than from a well-known practicing scientist whose work is so important that it has saved the lives of many people – at least this is one of Larry’s more recent claims.

And my responses to Larry, when seen in the wider context of his past comments, generally do not fall into the ad hominem category, but rather that of merely “answering a fool according to his folly.”

You asked a fair question and deserved an explicit answer.

"Leonardo, I am new to this blog and am dumbfounded by your vitriolic attack on Larry."

You can see some really amazing "green screen" video work at this video.

Scott A. commented, "Leonardo, I am new to this blog and am dumbfounded by your vitriolic attack on Larry."

Scott A., if you hang out here long enough, you will realize that Leonardo's function is to illustrate the importance of civil discourse by providing a series of bad examples.

I do not know who Scott A. is. And, I do not seem to recall doing any "boasting". That is not in my nature. I have merely told the truth.