Just What do You Mean - Doing the Work? 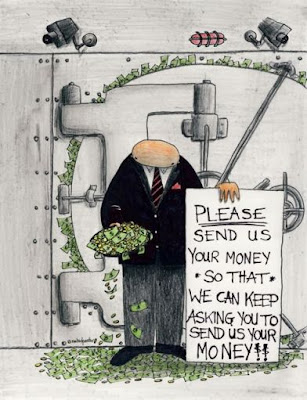 The picture says a thousand words regarding "The Work of God" warning the world of the pending great tribulation and preaching the gospel of the Kingdom of God to all the world.

Oh, and lets not forget the all important Building Fund - after double (or triple) tithes and offerings.

Using the promise of eternal life and the threats of eternal damnation as a means to extort money from the membership, the word "sucker" means little to the dumb sheep.

Sometimes I find myself needing a group of likeminded, but where? always trips me up. Sometimes I think it is a lonely spiritual trip from the inside out.

"The Work" for me seems to be inner work on being myself and not accepting shame, guilt, fear, shoulds and musts as the great motivators in life.

It's not an easy route. It certainly is not easier than just joining group think, showing up, pay, pray, obey and stay.

I have told those that want me to just go back somewhere and either "repent", or see it's changed that I can't unring the bells of understanding of things I feel I have accumulated in the last ten years. Religion is very cozy....spirituality (and I have not mastered it either) is a rather lonely path.

Richard wrote:
"Using the promise of eternal life and the threats of eternal damnation as a means to extort money..."


Richard, some version or another of that basic "business strategy" has been used by organized religion since the days of antiquity.

And it works quite well, doesn't it?

Gavin, does this mean you are now asking for money so that you blog can continue? :)

I can relate to what you are saying Den. I can't unlearn what I've learned about religion and spirituality.

Repent? nope, been there, done that, got the scars. I prefer to deny the holy spirit.

It often feels like it isn't an easy path but it is a lot easier than following the past.

Its the old selling ice cubes to Eskimos sales pitch.

You end up paying for something that has already been gifted to you.

What bothered me at the time, growing up in a Radio Church of God family, was that the Armstrongs--at the same time they were begging for donations for their divine commission to warn the world--acknowledged that the world was not going to heed the warning. But God demanded that members sacrifice to finance it anyway.

Wait, wait. What? Why would almighty God mandate a futile gesture? And why would he make his most beloved creatures pay for it?

The cartoon is dead on.

Dennis wrote:
"spirituality (and I have not mastered it either) is a rather lonely path."


Yes, my friend, it is indeed.

But ultimately, it’s only as individuals that that road can truly be entered upon.

I don't feel sorry for those who realize this sometimes difficult-to-accept truism - but rather for those who are timidly afraid to step out or do anything of value on their own without the constant support of groupthink. In imparting this mindset to their members, the COG’s have done them a great disservice.

Those addicted to the utterly false security of “the herd” are really the ones who deserve our compassion.

Why does God need money to spread his message? Didn't Jesus say that God could make the stones and rocks speak to proclaim the gospel.

The truth is that alot of money is needed to keep humanly devised religious institutions alive.

The money given to religious institutions can be better spent on our families needs and maybe helping those that are struggling in these difficult times. Isn't that much more important then keeping up flashy looking buildings and lining the pockets of self important ministers?

PS Off topic maybe, but has Bob Thiel offered anyone any explanation of his TH.D? He has to know AW and Gavin has asked the question. Does he just get to ignore it?

Say It Ain't So wrote:
"Off topic maybe, but has Bob Thiel offered anyone any explanation of his TH.D? He has to know AW and Gavin has asked the question. Does he just get to ignore it?"


Why shouldn't he just ignore the issue?

And why should he give us the objective facts?

Think about it - he has absolutely nothing to gain, and everything to lose, by being up front and bone-honest with respect to his academic credentials.

The audience he seeks to influence sure wouldn’t be blogging here on AW, and these gullible fools could care less about Thiel’s credentials, phony or not, any more than a drug addict cares about the educational background of the pusher he gets his fix from.

I may be wrong here, but my sense is that Thiel will indeed just continue to ignore the issue completely, hoping that it will eventually just evaporate away.

ED said, “The money given to religious institutions can be better spent on our families needs and maybe helping those that are struggling in these difficult times. Isn't that much more important then keeping up flashy looking buildings and lining the pockets of self important ministers?”

MY COMMENT – Ed, you are obviously in a bad attitude, and may not even be truly converted. Don’t you know “where your heart is, that is where your treasure will be also?” The Work cannot be completed – the Big Push, the Final Gun-lap – the Church will not be ready and the return of Jesus Christ will be delayed because of YOU and YOUR bad attitude. You risk being thrown into the Lake of Fire along with the Beast!

I suggest you fast and repent. May you repent of your bad attitude and your rebellion against the government of all mighty God.