A Case of Beams and Splinters?

Over at COGwriter, Bob Thiel is busy nuking some guy called James Malm. It's completely justified, as Malm has been slagging off Thiel. Never a dull moment in the sandpit.

What this clearly demonstrates is that Bob is quite capable of standing up for himself, and assuming a posture of peevish outrage. The current entry is entitled "James Malm Continues to Mislead."

Instead of repenting for being a false accuser of me, James Malm remains an accuser (cf. Revelation 12:10) as he continues to attempt to mislead people about me and my writings... The Apostle Paul faced false accusers as well who could not prove their false accusations (Acts 24:13).

Well, bully for Bob. But isn't it interesting that Bob has still failed to respond to questions about the legitimacy of a claimed Th.D from TCU. These claims are in his bio at Examiner.com, and on his own website. Hardly a good look to accuse someone else of misleading while being unable to provide the most rudimentary documentation for one's own claims. A case of beams and splinters?

The thing is, Bob gets a lot of traffic on his site, but where does it come from? Have a look at this breakdown from Alexa.com.

Sweet mystery of life, nearly 15% of Bob's click-through traffic comes from - gasp! - AW! No other source, search engines Google and Yahoo excluded, sends more visitors through for a dose of Bob's "Th.D" fueled Biblical expertise... Most of those would go directly to the COGwriter "news" page, while most of the search engine hits would go to one of the countless ratbag pages of opinion Bob has up on things like "Catholic prophecies," Mayan calendars, and whether Barack Obama is the Antichrist. If that's the case, most of Bob's upstream traffic would come from curious and confused nutcases outside the COG fold, which means the news blog - the part of Bob's site most of us are familiar with - has been hugely overrated in its influence. 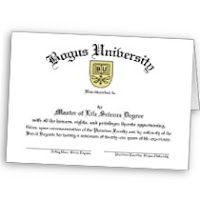 Yes brethren, I'm very tempted to rain on Bob's parade by withdrawing all links to his site... after all he doesn't link here. But that would be boorish and small-minded, so I guess he can continue to hang out in the apologists' section of the side bar.

But there'll be no more direct links from blog entries until Bob explains that alleged Th.D.

Question: Exactly which institution issued the Th.D? Full name required, as the obvious candidate for "TCU" is Texas Christian University, and they don't seem to know anything about it.
Posted by Gavin at 17:02

Perhaps Bob Thiel has decided you are "not worthy" of a proper answer.

However, that would be odd, since Thiel has, at every turn, when he (imo) thought he had evidence and an opportunity to counter something you'd written about him, has ranted about it.

Hmmmmm.....
Methinks Bob may be avoiding answering this question- but for what reason?

Bob Thiel's history indicates that it's probably because he doesn't have an answer that makes him look good.
Otherwise he'd be all about "others' errors"

What is this 'Repent' stuff? Is Bobby someone who it is possible to sin against? Did I miss his deification?

Also, it would seem that Bobby is comparing himself to the Apostle Paul.

My, my, my...someone needs to go buy a bigger hat.

Mel wrote:
"Perhaps Bob Thiel has decided you are "not worthy" of a proper answer."

That's long been a tactic of the COG's whenever they confront a genuinely penetrating question they don't have an answer to, or when the REAL answer is disconfirming of their theology.

COG culture is superb at “answering” questions THEY ask (“Just What Do You Mean Kingdom of God” etc.) but seriously drop the ball, or don’t even attempt to pick it up, when it comes to serious inquiries asked by those outside the COG’s.

And how convenient such an evasion is, for whenever an unsettling question comes their way, they can always run from it with the condescending comment, "You're in a bad attitude, and so we’re not going to give you an answer!" said in a smug kind of way as if they actually DO have a legitimate answer.

If only I was given a dollar every time I’ve heard this pathetic excuse trotted out!

Of course, Thiel’s actual reason for not responding may be nothing more than he knows deep down that he’s been caught in an academic credential deception, and thus has no other real alternative but to completely ignore the issue.

Think about it - if you actually HAD truly earned all these various degrees from legitimate universities, then what possible reason would you have to be so vague and unspecific in mentioning them on your website?

A made up name if I've ever heard one. What about Thiel of Certainly Unknown?

Of course, it may mean something like "Thiel of Certificates Unlimited".

I think I'll write a book, "2014-Samoan Prophecy Revealed in Goat Entrails and the Book of Revelation"

I gotta get in on this Church of God, "oh oh ask me, I know the answers" craze. It doesn't have to be true, just profound and just around the corner stuff.

If I sell enough of them, I will build a "God's College" and Auditorium to smooze the public into the kingdom of God and the faithful , to me, wondering if the end is so near, what's with all the permanent buildings with MY money!?? It's fun to chat with the brethren about "God wants quality" etc. It really confuses them and they just keep giving and giving and giving....

Sadly and of course, I doubt it will sell. I was just never very good at that Gerald Waterhouse "Strong Arm", "Weaver", Zurub..zerub..zeerubb...oh you know that OT guy, thing.

On Examiner.com Bob's alma mater is identified as TCU. After questions started to be asked, Bob edited his bio page to include the mystery Th.D (which he'd never mentioned before) - but this time it became T of CU. Either way, it makes little sense. IMO Bob needs to clearly explain, or fess up that he blatantly misrepresented himself in order to gain some cheap but undeserved credibility with his readers.

What would we do without Bob?

He is an Ambassador Watch editor's delight.Controversial,typocritical(read that carefully) and surely sincere in his beliefs.

As to his degree in theology,what can one say.He is like a slippery eel in the matter of providing a satisfactory answer.

Do a Google search for "Bob Thiel" diplomas and you may be surprised by the result:

Here's one of the results from the above search:

Yes, a Bob Thiel has received a diploma from Trinity Graduate School of Apologetics and Theology, Cochin University, in Kerala, India!

"And how convenient such an evasion is, for whenever an unsettling question comes their way, they can always run from it with the condescending comment, "You're in a bad attitude, and so we’re not going to give you an answer!" said in a smug kind of way as if they actually DO have a legitimate answer."

I had one experience with Dr Ward where I was accused of having a bad attitude from the moment I opened my mouth. I was quite shocked by this attack because I knew my own heart and certainly wasn't thinking anything other than "in case it's of interest, here is what I found in that exact situation you talked about in your sermon".

His approach to me was a good part of the start of my lack of faith in faith. Thanks Dr Ward.

His honor has been questioned. Does he not care about his honor?

Why is he not willing to defend himself from such a simple question?

This is not about some obscure event that occurred 50 or 2000 years ago. This is a simple yes or no question that he can easily answer.

Anonymous 12:29 wrote:
"I had one experience with Dr Ward where I was accused of having a bad attitude from the moment I opened my mouth."


Yeah, I know exactly what you’re talking about.

In the mid ‘90’s I was attending the Feast of Tabernacles once up in Keystone, Colorado. I was at a little informal get together with about a dozen or so other church folks, and Dr. Ward and his wife (Wanda?) were invited as well.

I was not impressed at all with Don Ward after dealing with him "up close and personal" at that gathering. He just sat there radiating about as much personality as a dog turd. He literally just sat there, waiting for people to ask him questions. He would give a brief response with little visible enthusiasm, and the rest of the time he looked bored to death.

Another time out in Pasadena he had given a sermon, and I went up to him afterwards for some further discussion, which I frequently enjoyed doing, and profited greatly from. I sincerely mentioned how I understood what he was talking about, and I agreed with it - he responded by just staring at me with a blank look on his face, and in an incredibly condescending manner said, "Well, good for you" and turned away to talk to somebody else.

As I reflect back upon that experience, that really was one of the first times I began seriously questioning the wisdom and character of the ministry as a whole.

Leonardo, your experiences with Dr Ward are very similar to mine.

I also recall he used to visit on hot summer days and one of the up and coming prospective graduate club guys would stand out side in the parking lot and keep the windows rolled down in Dr Wards car so he didn't have to get into a particularly hot car when he left.

I only wish I could have volunteered to do that, standing in the outside sun taking care of his car like that would have been far better than listening to him carry on about how wonderful country music was and how evil rock music was.

Who knows, I might have even been able to listen to some Led Zeppelin on my walkman at the same time.