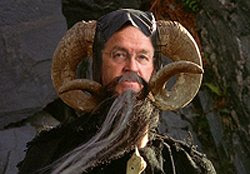 It's called "Jack Said," and features this insightful portrait of Ronald. A nice contrast to the beanie portrait. Could this be the sartorial standard for VIPs (Very Important Prophets) in the Great Tribulation?

Actually, an image like this just cries out for a caption.

Jack notes that Ronnie "is going to be on ABC TV in Australia on Sunday the 23rd." Any AW reader in Oz who'd like to file a report on the program for AW, along with their impressions, is warmly invited to do so. The publicity blurb states:

"Are we facing the end of the world? American Pentecostal Pastor [sic] Ron Weinland believes he has been sent by God to announce the end of the world in 3 years time! In a provocative episode of Compass we meet this self-proclaimed prophet. He believes the end times are imminent, and he’s not alone. Climate change, acts of terrorism and natural disasters have fuelled the current epidemic of apocalyptic thinking. In this Compass program leading Australian commentators; sociologist Richard Eckersley, Biblical scholar Dr John Dickson, literary academic Greg Clarke and psychologist Susan Tanner, tackle the ultimate question."

Update: From Mike's Flavor Aid blog... "there is a promotion video available online to those outside of Australia. Be patient through the brief advertisement and the two talking heads." This is on the Sydney Morning Herald site, and is probably the only chance for those of us in non-cane toad infested countries to get a taste of the show. A couple of nice shots of Ronnie who, methinks, is going to be the butt of many jokes around Oz on Monday morning.
Posted by Gavin at 21:10

Ron will be on "Compass" which is a serious religious affairs broadcast on Sunday Night. ABC is our government network - eg BBC in UK.

You know, this Ronald Weinland dude is one very mentally disturbed individual - and is in serious need of professional help.

The amazing part of it all is that a deluded group of followers still are with him, in spite of all his false proclaimations, backtrackings, etc.

Compass posts the programs they air in a wmv and a mp4 formats a few days after they air. They are available for download at

I don't know who you are ambassador watch, but thanks for the plug. It is important to me that anyone contemplating joining the COG-PKG be informed of it's perils.

How will the ministry of The Two Witnessess of Revelation play out?
What will it look like?
How will it go?
What can we expect?
I believe these questions deserve serious consideration.
The divinely empowered Two Witnessess of Revelation, Ron and Laura Weinland will have a powerful enemy in the Anti-Christ. They will probably have to immolate some of his minions.
This will put them in direct conflict with the Ruler of the World. The Anti-Christ will have a massive militrary force not to mention secret military forces to make people take his Mark and to enforce the No Buy No Sell requirement he will place on all mankind. Not to mention his requirement to be worshipped and if not, off with your head policy.
Certainly, Ron and Laura will warn against taking the Mark of The Beast. They will probably use some of their God given powers to aid Christians survival. They will undermine the Anti-Christ simply by helping Christians to survive.
When word gets out that there are fire beathing Witnesses there’s bound to be some publicity. I see a 60 Minutes interview, Sunday Talk shows, and probably some prime time specials, too. Not to mention tabloid TV like Inside Edition, etc – you really can’t avoid them just ask most celebrities.
They’ll do some of their Witnessessing in the streets of Jerusalem. I’m thinking we’ll probably be able to see them anytime on cable TV. There will be constant news updates, too featuring droughts they’ve caused, waters they’ve turned to blood and plagues they’ve inflicted – not too mention the suffering (Oh, the humanity!!) and anger. This will certainly cause them to be hated.
Ron and his wife will be urging people to repent, condemning them if they don’t and punishing with their God granted power to Stop The Rain and Bring Plagues as they wish.
The Two Witnesses of Revelation have gotten themselves a public relations man in Johnny Harrell.
Johnny, looks like your gonna have your hands full doing The Lord’s Work. You are trully blessed.

Ron has already had one crack at predicting times and seasons and got it wrong.


Why should we believe him a second time?.But,for the TV station he means revenue, which is the least of all the evils that Ron represents.

I imagine that Gucci will be providing their best line in sackcloth wherewith to gird his loins,paid for of course with all those tithes.

Yea,and all his misguided devotees will go the whole nine yards with their hero.

This worldwide economic downturn brings all the nuts,nincompoops and nescients to the fore.

What a great idea!
Everyone, please come up with a caption for the Weinland Wizard photo.

We do not need to go to Ronnie Weinland.

I was handed a folded A4 sheet by a singing Maori preacher this very morning,in our main street.

The Lord God Almighty
Loves You!
He is Returning Soon" etc.

So Ronnie does not have exclusivity.

I guess one big difference between Ronnie and your street preacher might be that the street preacher isn't bald-faced enough to set actual dates. "Soon" is a marvellously malleable qualifier!

On one occasion I unwisely snorted audibly when passing one of those Plymouth Brethren types with a bad suit and a whining sing-song voice: my reward was to be regaled about "scoffers in the last days" till I passed out of earshot. These guys are every bit as hopeless as most COGgers, but maybe not quite in the same league as the Witless One.

Not directly related to this topic but, maybe the COG splinters had it wrong all along.
Without a shot being fired "The results of the G-20 economic summit amount to nothing less than the seamless integration of the United States into the European economy."

A clarification on your correction. While the Weinland episode of Compass may be put online next week, that won't be helpful to most. The ABC employs IP filtering to restrict access to those in Australia only.

Hopefully someone in Australia will report on their impressions of the program. Rodders?

Discovering that Compass is not available to me is disappointing. Once again Dr. Mike, you have proved to me your worthiness of the title I have bestowed upon you.

Maybe someone will record the program and upload to YouTube.
I'll be watching and/or videotaping the program but have no experience with YouTube except for viewing a few presentations.

Yes I will be watching & will be glad to post my impressions - such as they are.
Rodders

Rodders,
I guarantee there will be many in Canada waiting for your impressions. Especially what the sociologist has to say.

"Follow! But -- follow only if ye be men of valor, for the entrance to this church is guarded by websites so foul, so scurrilous that no man has yet visited them and lived! Ambassador Watch, Weinland Watch, COGWriter and now Jack Said! Death awaits you all with nasty big pointy teeth!"

"Hope the sheep don't wake up, or I could end up Photoshopped onto a picture of that Hogwarts ghost..."

"Burn Weinland Watch -- she's a witch! Burn her! She turned me into a newt!"

"Next Feast of Trumpets, you'll get to hear what real rams' horns sound like!"

"That so-called 'Holy' Hand Grenade of Antioch won't do a thing! Why, it's got a cross on it!"

"My other staff turns into a python."

("Hah! I told you the Easter Bunny is deadly!")