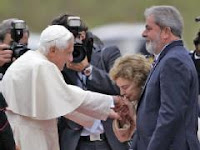 A long time ago in a universe far, far away I received a "ministerial visit." Big Jack brought along a taciturn deacon named Neville whose sole role was to nod occasionally, but he did all the speaking. He informed me that by asking stroppy questions I had "in effect" disfellowshipped myself. This was news to me, and a nifty strategy to shift whatever blame there might be completely to my side of the court.

I was reminded of that encounter today when I read about Papa Ratzinger's current tour of Latin America. Pope Joe has been slapping liberal Latin lawmakers around - especially those who deviate from Roman dogma on fertility issues - and threatening them with excommunication (LA Times report.) A Vatican spin doctor tried to tone down the Beaded Wonder's fulminations by explaining that such politicians had already, in fact, "excommunicated themselves."

I don't want to enter the vexed issue of abortion. I'm against it as much as any bloke who can never give birth ever can be, but I'm also against the narrow view that forbids abortion at any cost. I also firmly believe any woman has the total right to manage her own fertility without some religious cross dresser telling her otherwise. But that's beside the point. Papa Joe's minder and the Herbal apostates have this much in common - they are slippery manipulators par excellence.
Posted by Gavin at 16:11

That's what everyone should do. Even if the religion were true "the work" was for only a short time span that ended in the first century.

Rom 9:28 For he will finish the work, and cut it short in righteousness: because a short work will the Lord make upon the earth.

After that time, the work of preaching the gospel was finished because it had been preached in all the world (known world) as a witness to all nations by the time of the apostle's deaths.

Jesus is not coming back and the Poop of Rome is just that.

A few Presidential candidates are worrying about this new "interventionist" Pope.

The Pope doesn't excommunicate anyone for asking "stroppy questions."

And the Pope isn't a "slippery manipulater" by upholding long established canon law.

One can disagree with the Church's view on abortion, but it's still the position of the Church, which considers it murder.

All Catholic "excommunication" means is that the excommunicated may not receive Communion (or any of the sacraments). They are free to be present; they just can't partake of the species of bread and wine. Catholic excommunication is far different from HWA's version.

Since the Church considers abortion to be murder, and since taking the Lord's Supper should be done with a clean conscience -- and not while guilty of grave sin -- then it makes perfect sense that a person involved in an abortion should not be permitted to receive the Body and Blood of Christ until there is repentance.

This is not the same as absolute shunning because of tough questions, having a "bad attitude," wearing makeup, or watching Protestant preachers on TV.

Rather than blather on about specifics, perhaps a reread of The Church Members Bill of Rights might be in order. You're not free until you can look "God's Representatives" in the eye and say "Thanks for your input, I'll take it under consideration."

Excommuication was a legitimate means of self-preservation instituted in the Christian Church.
I am not sure how we evaluate it in the non-Chrilstian Armstrongite context.

My guess is that among Armstrongite ministers it is just a tool and may be used when and where they feel it needs to be and for whatever ends. Certainly, the Armstrongite form of execommunication is not supported by the activity of the Holy Spirit.

My experience when I was an Armstrongite was that the threat of excommunication was the source of the power in the Armstrongite ministry. (Whereas the source of power among Christians is the Holy Spirit.) Armstrongite laymembers knew that they could be booted out and that this would abrogate their salvation and terminate their relationship with God.

I would expect that if we studied this topic more deeply, we would find that Armstrongite execommunication was underpinned by a spirit of murder. The "authorities" who exercised excommunication knew that they were killing people, as they mistakenly interpreted reality, and knew they were killing them for eternity. No doubt this gave them a great sense of power.

People have the "right" to leave the Catholic Faith if they don't agree with certain of its dogmatic teachings.

The Catholic Church has plenty of room for discussion and even heated disagreements, but not in certain clearly defined areas.

"I would expect that if we studied this topic more deeply, we would find that Armstrongite execommunication was underpinned by a spirit of murder."

Bit of an exaggeration there Neo..

The "authorities" who exercised excommunication knew that they were killing people, as they mistakenly interpreted reality, and knew they were killing them for eternity. No doubt this gave them a great sense of power."

Bit of an exaggeration there Neo...

You're "guesses and expectations" may have found expression in some uncommon way in an abberant personality in the ministry, but was not near as sinister as this.

Many churches ask many people to leave for many reasons and is abused by all denominations that do so. But underpinned with a spirt of murder, who "knew"they were killing them off for "all eternity" and gave them "great power," uh uh...dramatic hindsite gone askew.

Besides, Catholics invented the artform of control called excommunication I suspect. And I just know that every Priest and Every Pope did so in the spirit of murder knowing they were killing them off for all eternity and sending them and their babies who knows where cause it changes every few hundred years...:)

Anyway...happy mother's day and I don't mean the Church.

"You're not free until you can look "God's Representatives" in the eye and say "Thanks for your input, I'll take it under consideration." "


that's what I've always done (but not necessarily in those exact words...lol)... sometimes reminding them that we are told to "...prove all things..."

I've never had a minister get nasty with me, but I have received a few "looks" thru the years...

one was rather firm with me once on a particular issue, but he was on the wrong side of the argument, and I think that deep down, he knew it....but he still took the "church's" position on it .


those that realize that their commitment is to God and not to an earthly corporation will have few problems concerning excommunication, or whatever you want to call it....

everyone should be respectful of those in leadership positions, and not go in trying to "pick a fight" with them......but when they take the wrong position on something, just quietly continue to do what you know is right, and the opportunity will arise when you can gently introduce your position in a way that will generate serious consideration of it...

didn't Jesus teach us to be helpful to our brothers (and sisters) in the Church?....what can be more helpful that helping them to see an error? I'm in the Church today in part because a great number of brothers helped me see the error that I was in.

BAP...I agree. I think the anger in hindsite comes from not having spoken up, believing, and perhaps rightly so with a particular minister type, there would be grave consequences. We have all done it and not just with ministers with whom we disagree. I know my way of disagreeing has always been more just getting real quiet and dropping out of the "explanation" I can certainly indentify with all you said and perhaps ministers need some education on not being always right and how to discern opinion from reality. Of course, had I had that skill early in the game I would not have to write about the experience

but when they take the wrong position on something, just quietly continue to do what you know is right, and the opportunity will arise when you can gently introduce your position in a way that will generate serious consideration of it...