All the news that's fit to print 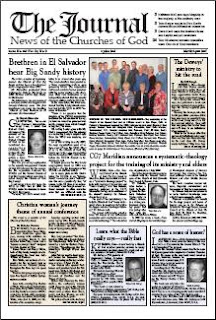 The latest issue of The Journal is out. Highlights:

Pam and George Dewey are hitting the road in a used RV to preach 'n teach, and The Journal poses typically COGish questions: does Pam give sermons? Should a woman be doing this stuff? Pam's replies are, as usual, to the point.

The CG7 splinter based in Meridian, Idaho, gets a mention too. It seems they've got their own unaccredited college. Maybe Rod should send Doc Germano over to see if he can fix them up...

LCG member Thomas Geiger responds to Ronald Dart's inappropriate pontifications on the Wisconsin killings. Geiger is no namby-pamby peacenik himself, he assures us. "... I am a hunter and thus join you as being a gun-toting Christian. Mr. [Carl] McNair was not a pacifist, nor am I, and I would defend my family to the death. I believe that, almost to a man, this is the way the men in the LCG and most of God’s churches are wired." No, the problem, dear Ron, is that there wasn't enough time to respond. Why Dart thought he was qualified to "armchair quarterback" on this issue is a mystery. As for the virtues of being a "gun-toting Christian" - I guess Terry Ratzmann would have heartily agreed.

The Big Sandy Church of God is developing a relationship with the El Salvador dissidents (or true believers, depending on your perspective) led by Herberth Cisneros.

You can read the front and back pages of the issue online.
Posted by Gavin at 18:20