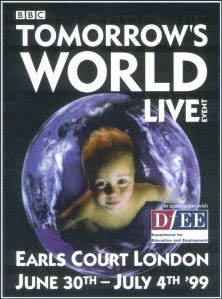 Let's all help out the LCG as it faces a new crisis, this time a marketing crisis. Whether the lads have had advance warning I don't know, but I for one am willing to contribute my services in search of a solution.

LCG needs a new name for its magazine and TV show. Quick!

Those of us in Her Majesty's Dominions - if we're sufficiently long in the tooth - will remember the BBC science series Tomorrow's World. No hillbilly apocalyptic apologetics there, it was cutting edge stuff.

TW went the way of all TV shows after nearly 40 years. FORTY YEARS. That gives the Beeb a substantial claim to the name! It first saw the light in 1965, long before WCG launched the short-lived Good News of Tomorrow's World in - was it 1979?

Of course, there was no problem as long as Auntie wasn't using the name. Alas, the Grand Old Dame has had a change of heart. Check out this story. The name is being dusted off as part of a rebranding exercise, even though there are no plans to resurrect the show (though we live in hopes!)

"BBC News has decided to bring back the "brand" for a whole range of technology coverage which you will see on TV and online over the coming 12 months."

Can you see the possibility for confusion? The BBC getting letters asking about the 2300 days of Daniel and Rod getting enquiries about solar-powered washing machines. Ghastly!

So let's all put our noggins together and come up with a new name for the boys in Charlotte to use. Suggestions please.
Posted by Gavin at 15:32

Ever wanted to peer into the future and know what will never happen? Watch "The World Manana" where our motto is "We've been wrong before and we'll be wrong again!" See how our team of heretics morphs simple scripture lessons into your worst nightmares! Watch and hear us set dates and deny it later! Can't get your young ones to behave? Frighten them into submission with our tale of the beast and the tribulation!! Works much better than "Hannibal ad Portum!" LSD not really doing it for you? Apocalyptic Religion can be your new drug of choice!

Check your local listings for showtimes...

Enhancement for Dick and Rod.

Who Want's to be a Roderick?

How about:
How to destroy your relationship with in God in 12 easy issues!

Sorry to burst anybody's bubble, but for market "confusion" to be an issue, the two must be competing in the same (or at least a very similar) market. BBC's "Tomorrow's World" is, as you show in your blog, in the science and technology "market", while LCG's "Tomorrow's World" is in the "religion" market (the phrase "field of religion" may sound better). If there is therefore no direct market confusion with LCG's and BBC's use of that "brand", then LCG has nothing to worry about.

Wow, thanks for pointing that out "Anonymous." New name suggestion, now the "markets" thing has been so deftly cleared up: The Coca Cola Church of God (It's the Real Thing!)

Should attract a bit of interest, huh.

So... how different is science from pseudo science?

Don't they still have a problem?

TOTALLY WALLY
(In the English sense of the word)