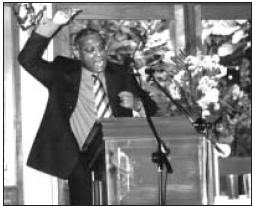 The November-December issue of The Journal is rolling off the presses and into the mailbags. It includes a detailed report on UCG's hassles – self inflicted – in El Salvador. Quotable quote: “[Reg] Killingley says what he sees as the mishandling of the situation is not entirely Mr. [Leon] Walker’s fault because he is, “in so many ways, archetypically Anglo-Saxon and antithetically Latin.”

Another quotable comment, this time from Brian Knowles in the letters section: ““Evangelist” is not a rank but a role. It is a function, not a position in a pecking order.” We'll be sending Bob Thiel around to sort Brian out on that one!

Can't get to sleep worrying about the “70 Weeks Prophecy”? Anyone with a penchant for that kind of thing can indulge themselves in an essay by Gary Arvidson and Clyde Brown which serves as an extended ad for a couple of booklets they'll send you for a $5 donation. No thanks.

Willie Dankenbring gets front page treatment from Mac Overton, all positive. Jesus is the archangel Michael, the US is Ephraim (not Manasseh) in prophecy. No mention by Mac of all those embarrassing date-setting episodes (that have since been flushed) in the Flash.

For the visual learners among us, check out the photo that shows Jamaican CGI celebrity-leader Ian Boyne in an arm-upraised, finger-stabbing pose (almost Herbertesque) as he thrashes the pulpit during the FOT.

Perhaps surprisingly, there's no mention of the Bryce affair. I guess we'll have to wait for the Jan-Feb issue.

To get a peek at the issue, click across to www.thejournal.org/issues/issue116/jf113006.pdf. Compulsory reading for those who want to keep a non-stabbing finger on the pulse of life in the COGs.
Posted by Gavin at 17:44

I let my subscription to The Journal lapse.

Sanity is better than satisfying curiosity.

Within the timeframe of The Journal’s publication, UCG has released the January edition of UNITEDNEWS, in which it has announced that its Doctrinal Committee will have an appellate function, rather than an administrative one. This change from administrative to appellate is in line with AC’s 1962 Advanced Prophecy Seminar, in which GTA said there would be no new revelation. Only a few of the then leading men at AC who were in that seminar are still alive. But their legacy lives in a doctrinal committee having an appellate function. Churches are not challenged by change—they have doctrinal committees to prevent change.

If the US is Ephraim and not Manasseh, does that mean the United States will join the EU and then will drop out? Such was said by the herbal apostate apostle concerning the Brits!

Do I understand correctly then, that UCG considers its established body of doctrine to be analagous to the US Constitution, with the Doctrinal Committee assuming an interpretive role similar to that of the US Supreme Court?

That would indeed mean that they were closed to new information brought into play by science or archaeology, new manuscripts, etc. Oh well. Would we really expect them to behave any differently? Just a reaffirmation of the leopard's spots.

"This change from administrative to appellate is in line with AC’s 1962 Advanced Prophecy Seminar, in which GTA said there would be no new revelation."

But we DID have some new revelation coming our way - about GTA!

The November-December issue of The Journal is rolling off the presses and into the mailbags.

Which translates into receiving the paper sometime in April.

Yeah, I know it's a small operation and all, but if a "link-tease" can be sent around, presumably to those on a mailing list, then why not offer an on-line subscription version as well? It doesn't have to be some fancy-schmancy zine, a PDF file will do just fine, thank you.

In other UCG news, this one on page 5 did not go unnoticed:
"Representatives of Living (LCG) accepted an invitation to visit the UCG home office...."
Representatives? I wonder which ones? Do we dare to hope? ;-)

I have been surprised that "The Journal" has continued to exist. One of the prominent attributes of Armstrongism is the careful management and manipulation of information going to lay members. As splinter groups came into existence over the decades, they begin to publish. Since loyal Armstrongite lay members had been trained to read no other literature but what was officially approved by the pre-1995 WCG, there was no chance we would ever be exposed to what was referred to as "dissident literature."

My guess is that Cartwright's "The Journal" is not acceptable to the leadership of any of the COGs, and has probably been proscribed by most. The questions is: Who subscribes to it and keeps it economically viable?

I do not often read articles from The Journal because it seems to be an orthodox Armstrongite rag from my persective. But I see all Armstrongites as being pretty much the same. I am sure they carefully differentiate among themselves, probably over things I would find to be trivial, and regard the eclecticism of The Journal to be reprehensible.

Concerning Ian Boyne...In hindsite, preaching is hilarious and sad all in the same breath. A sermon is the only place a man can act like a fool and it seems like wisdom. It's one of the few places you can yell and people just stare back at ya. It's a technique that works best when what you say has far less value than how you say it. It's the only place a man can act like a ninny and appear to know what he is talking about. If any other human being taught you any other topic that way, you'd ask for a refund...

Big Sandy Church of God (one with a large hall) will be hosting a Super Bowl party on Sunday, Feb 4 Chicago Bears coach Lovie Smith
grew up in Big Sandy (and supports a Methodist congregation in town)

lil' john,
I remember when WCG visited the Trinity Evangelical group in Illinois with Ruth Tucker. Hulme was one of the WCG guys who even talked about the changes being made in WCG, this about 1989 at the Tanner Lecture series.. I blew it all off until i saw it coming to pass. So maybe just maybe in like fashion, those you hope would be going to this visit at UCG.
rod 2