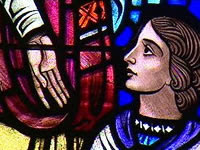 Dear Brothers and Sisters in Christ,
The Worldwide Church of God has now completed the doctrinal study on the topic of ordaining women to the office of elder. As an introduction to the completed study, we have prepared a video presentation, which you can access by clicking on this link: www.wcg.org/women.htm The final chapter of the study is attached to this e-mail update, and will appear in the new issue of Together, which will be mailed today.

Which in most churches would be good news, proof that the community of believers was moving ahead into the twentieth century, and might eventually meet up with the rest of us in the twenty-first.

Regardless, within the next fifty years I'd predict that there'll be a woman in the office of Archbishop of Canterbury and women ordained to the Catholic priesthood. The sexism that has been institutionalised in the historic Christian denominations can't survive any more than the tolerance of slavery survived the nineteenth century.

So here comes the Tkach church to climb on board the bandwagon. But wait just a minute...

We know why so many blokes wanted to be ordained. Status. Not many cared for the genuinely pastoral side of ministry, few pursued theological enquiry beyond the stale crumbs offered at Ambassador College. But to stand above the common herd on a stage, strutting behind a lectern and having the sheep hang on every word; that can be quite a trip.

The new, downsized WCG may be a little different, but last I heard Joe Jr. hadn't tendered his resignation and announced a new policy where the church (the people or the local congregations) could choose its own president. Joe is President for Life, a bit like Robert Mugabe.

Last I heard the church's board was still largely a rubber stamp body made up of appointees. No prizes for guessing who appoints them.

And now women are eligible to be inducted into the old boys club? I suppose a few will be tempted to snuggle up to the offer. Maybe that'll be a good thing in the longer term. A year or so ago AW suggested that Sheila Graham would make a great church president, and most readers agreed! But the compromises needed will be, one suspects, more than most Christian women could stomach. Accepting the baubles of office in such circumstances is a bit like Esau selling his birthright for a bowl of pottage.

Meantime, just watch the last remaining conservative, middle aged, tithe paying blokes balk at the prospect of having to listen to a woman preach!
Posted by Gavin at 21:17

At least they finally got something right!

Hey, get a load of what Craig “BI” White is saying about this on OWCG

Quote begins -- Left-wing WCG 'pastor'-GENERAL, Tkach jnr, has announced that women may be
appointed as elders and pastors... Talk about apostasy, political correctness and social Leninism! Let me assure you that the apostasy won't stop there. These leftists are working on a way around the homosexual issue. They are starting off by toning down the verbal opposition to this sin; then saying 'let them come as long as they behave themselves' followed by ... Quote ends

Shoot, I thought Senator McCarthy was dead! Racism AND sexism -- quite a package deal

I am a known cynic. But I believe that the process of ordination in the WCG and its offshoots is a highly politicized process. Just like the process of who got admitted to Ambassador College.

My guess is that we will soon see
Tammy Hall Tkach ordained Pastoress General, with all the perquisites pertaining thereto.

The idea that a bunch of women who have been steeped in Armstrongism all their lives have suddenly become eligible to be ordained is somehow underwhelming.

"Regardless, within the next fifty years I'd predict that there'll be a woman in the office of Archbishop of Canterbury and women ordained to the Catholic priesthood."

Yeah, if Anglicanism is still around in 50 years, it's quite possible that it might be headed by a Archbishopess. After all, the legal head of the Church of England is the English monarch (since the Anglican Church is merely an arm of the secular state and not a freestanding church in its own right), and the English monarch can be either a man or a woman. The Church of England has already been led by women, so there's really no logical reason why the See of Canterbury couldn't be occupied by a woman. The Anglicans have given the go-ahead to women bishops, so it's only a matter of time before we see an Archbishopess of Canterbury.

As for the Catholic Church ordaining women, don't hold your breath. We've never even ordained female deacons before (our deaconnesses of ancient times were more analogous to nuns), let alone female priests. IF it ever happens (if really, really, really big if), it would immediately provoke a fatal and irreparable schism.

Admittedly, though, we've ordained rather a lot of queens to the priesthood . . . .

A further comment on this latest decision of the WCG: Is anyone really surprised that they have "discovered" that, by golly, whaddayaknow, the Bible never did reserve ordination to men after all despite 2,000 years of unvarying orthodox Christian tradition? In my experience, whenever the WCG embarks on a "study" to determine "biblical truth," you can be pretty sure that they wouldn't be considering a change in a doctrine unless they already intended to change it and just needed to find plausible arguments to justify it.

Also, as I've said before, since the WCG has always lacked a sacramental Eucharistic theology, it really makes no difference whether or not they ordain women. If the Eucharist and the other saraments are just symbols and shadow dances, a woman can serve as well as man in such a stage production. But if it's the re-presentation of Christ's sacrifice and the mystical marriage supper of the Lamb with his Bride, then it might make a difference whether or not the one who presides over the rite is male or female.

This is odd, since in the Spokane WCG a woman was preaching at the Women's Club on the South Hill -- at least according to my source who lived there.

That's all my UCG Pastor said this weekend, commenting on the announcement.

Which comes, by the way, 12 years to the week after Joseph Tkach Sr. dropped the bombshell in suburban Atlanta.

I have just emerged from perhaps the most IMPORTANTmeeting of our time!

The purpose of this meeting , reminiscent of Acts 15 (or a major mafia meeting- your choice) , was to work out the rules and transition for having women be elders and preachers in COG services.

Much debate and wrangling occurred in this all night session. Cigar smoke permeated the room, and no less than two fist fights had to be restrained! Yet, in full consensus, the participants realized that having women speakers and leaders in the church is an inevitable cultural trend over the next 20 years. To be resolved, was how to make this transition as smooth as possible, and as little shocking as possible to the "Good Ole Boys" COG club.

In a 100% vote it was resolved that women can lecture and lead at church services if ALL of the following conditions are met over the next 20 years. After 20 years, women will then have full rights and privlidge for church leadership and speaking as any man:

1) Women preachers must be pleasing to the eyes.

2) They must have sexy or sultry voices. No shrill or whiney stuff.

4) They cannot read "recipes" from the pulpit

5) No complaints from the pulpit, by women preachers, that men leave their socks and underwear lying around, leave the toilet seat up, or "pee on the floor" .

Examples cited of "Non-Compliance" would be the likes of Joyce Meyer, Hillary Clinton and Dianne Feinstein.

It was further resolved, that yours truly, "The Lussenheide", would be the "liason" amongst the various churches to bring the results of this secret meeting to you all. It was thought that I was the appropriate messenger because I was equally hated by all.

Now , please do not get all over my case for this information. I merely act as a messenger, not originator.

Your vote of approval or disapproval to be voiced here on the forum.

We Christadelphians will not tolerate a woman to even speak in the ecclesia much less be a minister (we don't even let men be ministers). No, we will staunchly stick by our narrow-minded literal fundie fundamentals as long as is literally possible or until hell freezes over, whichever comes first.

Gavin, I see your poll at the top right of your weblog this morning. Unfortunately you left out one option: "Does it really make any difference?"

You really have to admire the way they went about this. If the HQ leaders really had their mind made up on this they would not have let this drag out for 3 years while the research took place.

They realized the seriousness of this issue and invited research papers from the laity at each step of the process. The whole process was pretty much in the open.

The other COGs could learn a thing or two about how this was done regardless if you agree with the outcome.

Oh please, it was done the same way they foisted off the doctrinal changes in 95. They came to a conclusion years prior and took baby steps towards it. The conclusion to that paper was determined a long time ago.