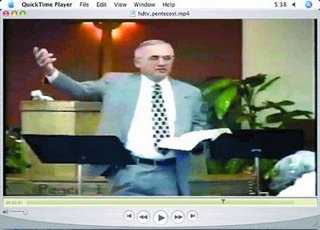 In 1996 240 odd people (some odder than others no doubt) attended the WCG services in Fairfield, California. Then the winds of change blew. There was a newly redefined, repackaged Gospel. The old ways were a barrier to evangelism.

Fairfield had apparently been a reasonably vibrant congregation up till then, as WCG churches go. Now the sky would surely be the limit.

Today they muster around 20 on an average week.

I'm indebted to Bob Thiel for drawing attention to a local newspaper article featuring the Fairfield congregation and its pollyannaish pastor, Stephen Smith. Stephen is not discouraged by his dwindling, aging flock. Stephen is not distressed by the disappearance of some 220 people to God alone knows where - splinters, sects and secular alternatives. In the spirit of the Monty Python song, Stephen tries to "always look on the bright side of life."

...as his church's membership ages and the congregation dwindles in numbers, attracting newcomers by offering podcasts and downloadable videos of sermons is becoming more key to the church's survival, he said.

Technology has been a way to reach more people, as the church's membership dropped over the years, Smith said.

About a decade ago, about 240 regularly attended the Fairfield church, he said. Then, the church changed its doctrine to no longer require members to limit activities on the Sabbath, from sundown Friday to sundown Saturday.

Will podcasts save the Fairfield church? Probably not. Is it just a vain chasing after the wind, Ecclesiastes style? Indubitably.

And if you had a group of only 20 regulars, might there be a more appropriate way of conducting a meeting than having a bloke in a jacket and tie standing up the front and dramatically waving his arms around? Perish the thought!

For a somewhat different perspective on what's up in Fairfield, you can click over to Richard Burnett's blog. Or visit the Fairfield WCG website at http://www.worldwidechurchofgod.com (which Richard also manages) - I'm sure he'd appreciate the traffic.
Posted by Gavin at 20:07

My reaction to the photograph of Richard Burnett preaching is the same as yours. I do not like the bold gestures and loud voice that used to pass in the pre-1995 WCG as "powerful preaching." On the other hand, I realize that this is just a photo, lifted out of context, and if I had been present I might have found it innocuous.

The present WCG does not have a strong marketing program. It is to be commended that it is trying to look as much as possible like a main stream Protestant church. But that does not give it the product differentiation that leads to an expanding market. Consequently, it is a small denomination founded on customer loyalty. Future growth in the WCG is not an issue of selecting the right communications technology. It is, rather, a matter of offering something that is not already in the market place. And the captialist market place will weed out those churches for which there is no demand. In the last analysis, orthodoxy, in a market place saturated with orthodoxy, will be the demise of the WCG.

Put another way, the world really doesn't need a WCG.

Good ole Brian Knowles always likes to refer the Church of God as the "POD" in his writings.

So what should we call it when someone is broadcasting a Podcast for those that are in the "Pod"??

Lussenheid,
POD=Piece of Dung!
Burnett leads by example! He is on to something here!

Wow, this guy has a big gasoline bill every month. Especially from Fairfield to Modesto, sometimes the Saturday Traffic can be tough. He probably telecons his sermon from his cell phone if he gets stuck in traffic.