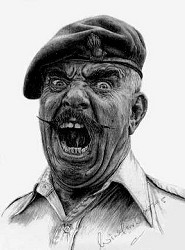 If you were Gerry Flurry, eager to entice multitudes of eager tithe-paying members to rally to your cause, how would you do it?

Sociologist Rodney Stark has studied successful conversion strategies and reached some striking conclusions. The key is often in tapping into the members' existing social networks (friends and family). Stark makes a strong case that conversion often has less to do with being convinced by doctrine than with fitting in with significant others in our lives. Often, it seems, we only really convince ourselves after making a commitment, not before.

If that seems strange, consider the testimony of a Mormon mission president. When the missionaries make "cold calls" (doorknocking strangers) they recruit one time in a thousand. But when their contact is in the home of a Mormon friend or relative, the odds go up to 50%!

Think for a moment of people you know who joined the COG movement. How often did a parent follow after a son or daughter showed the initial interest? Think about those cases when one sibling followed another into "the truth", or one spouse followed another. Each may have been fully convinced that they were individually "called" into the faith proclaimed by Herb and Ted (or Gerry or Rod...), but the reality was more complex. Do we ever really understand our own deepest motivations? Stark suggests that those with weak social networks are the most likely to be attracted to a new religious movement - witness the efforts some cults put into recruiting on campuses where young people are away from familiar faces, family and friends. My own theory is that people tend to leave sects in similar circumstances - when they've moved away from their home congregation to take on a new job for example, and suddenly have the distance to get a clearer perspective.

"Most new religious movements fail because they quickly become closed, or semi-closed networks. That is, they fail to keep forming and sustaining attachments to outsiders and thereby lose the capacity to grow. Successful movements discover techniques for remaining open networks, able to reach out and into adjacent social networks." (Stark, The Rise of Christianity, p.20)

Poor old Gerry, hell-bent on cutting off all contact between the inmates in his religious ghetto and those in "adjacent social networks" - members and ex-members of other COGs. The tragic side is in torn and bleeding relationships - friends and family separated by the PCG's barrier of fear. However, on a positive note, the contagion of intolerance is also kept at arms length by that very isolationism. No wonder PCG has failed to grow - despite slick magazines, beautiful buildings, airtime on scores of TV stations and enough hot air each week from his client-ministers to inflate a fleet of Zeppelins.

As Sergeant Major Williams used to say on the classic British comedy series "It Ain't Half Hot Mum": "Oh dear, how sad, never mind."
Posted by Gavin at 20:52

Armstrongism, like other cults and sects, plays to a limited market. Cults have a very difficult time recruiting people who have normative life experiences and values. Most of their audience is to be found "in the tail of the normal distribution." This is a hard constraint on their ability to grow.

In my personal journey through Armstrongism, I found, for instance, people who were part of the pre-1995 WCG because they felt it gave them access to special knowledge. They felt they understood prophetic events and so had "one up" on the rest of the American population. Some were quite blatantly prideful about this special understanding. There were others who had other kinds or problems and were a part of the Armstrongite cult for that reason, including myself. But how many of these kinds of people are around? And other cults are competing for the same small market share.

Back in the Sixties, the talk around WCG congregations was that "the Church" would be growing by 30% per year until the end of the age. Some of the WCG sages determined that the return of Christ was imminent because, at this growth rate, before long the whole world would be in "the Church". Of course, it never happened. The WCG levelled out at a little over 100,000 and never went any further and Armstrongism is now in steep decline. The pre-1995 WCG exhausted the potential market share for that kind of a cult (or sect) appeal.

My belief is that cults succeed in recruitment because they provide something beneficial to proselyte - something that the proselyte needs. This is true of orthodox Christian denominations as well, but cults appeal to something in us that is dysfunctional.

HWA paid close attention to conversion statistics. He was a man who believed in marketing studies.

In Data Processing at the WCG we'd match conversion rates against the PT mailing list subscribers, minus the inevitable departure of "disaffected" members. We found that tithe paying membership stayed pretty steady at between .01% and .02% of Plain Truth circulation lists.

The dark side of all this was fact that as of 1984, 30% of anyone ever in the WCG left the organization (this was pre-reformation). I was still in my devout phase of Armstrongism. That statistic always bothered me. But I was sworn to secrecy.

It seemed that if the WCG was truly "God's work", a 30% spoilage rate of human beings headed for the "Lake of Fire" meant that God was very inefficient, or at the very best, careless in His use of humans.

The other explanation, which I resisted to the end, was that it truly was a work of men. And all was for naught.