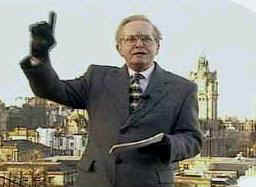 And the results are:

Which illustrates two things. Sects - like the old WCG which beat the populist drum - tend to recruit people with little formal education. But there are always exceptions (Robert Kuhn springs to mind), and it doesn't mean that most COG members are unintelligent: just that sects appeal less as educational levels rise. But look at Scientology... with 81% of members holding degrees. Sociologists have determined that these groups (cults, as described in part 1) recruit from a quite different cross section of the population - which just proves that a good education doesn't always deliver common sense.

So, in sociological terms, Herb Armstrong built a sect, not a cult. It would be nice to be able to label Flurry's PCG as a cult, if only because it sounds a lot more dangerous than sect (and it is arguably dangerous!) but PCG's pushing of conservative political and cultural buttons is a definite sectarian characteristic. There's neither originality or insight in evidence, only the beating of those same old drums again and again and again, just like an obsessively bored three-year old.

But there's good news too, great news! Flurry's PCG is heading full steam ahead into the trashbin of history, and Gerry shows no signs of hitting the brakes. In fact, Gerry is unknowingly doing all the right things to push his little sect over the cliff in a lemming drive. More on this in part three.

*Note: Mormons were placed outside the three categories as a special case.
Posted by Gavin at 19:51

Part of the explanation for the low representation of college graduates in the pre-1995 WCG is the particular bias Armstrongites have had towards anything academic. When I first came into contact with the WCG, back in the Sixties, people with college degrees or pursuing college degrees were regarded with suspicion and, in some cases, disdain. Herbert Armstrong railed against modern education in many of his writings. In one publication, he maintained that in the Millenium, people with a worldly college education would have to study for seven years to unlearn all that they knew. Ambassador College was the only institution in the world where a real education could be had.

In the mid-Seventies, as AC sought accreditation, there was a reversal of this view temporarily and many faculty members "went to school", with church financial support, to get degrees from secular institutions. Eventually Herbert Armstrong put an end to this and began closing down campuses.

Overall the Armstrongite environment was hostile to the pursuit of higher education. Not only was the knowledge acquired in institutions of higher education tainted, but it was accompanied in many cases by an inquisitive or questioning attitude, an attitude very undesirable in the Armstrongite culture. I heard an anecdote about an Armstrongite pastor who did not want to hold services in an available room on a college campus because he felt that atheistic professors would burst into the room during services and challenge him as he stood behind the pulpit. With this kind of fear and dread of academics and the advocacy of a narrow and light-weight AC education, why would college graduates involve themselves with Armstrongism?

One common distinction between "cult" and "sect" is that a sect adheres to heterodox doctrines (compared to the 'mainstream' group to which it is related), while a cult does not have fixed doctrines, but rather accepts the leader's word as doctrine.

By this measure, WCG was a cult, but ironically a group like UCG could be considered a 'sect' as for the most part it no longer "innovates" in its doctrines.

By this measure, PCG and LCG are cults. Anyone who has had the misfortune of listening to several Flurry or Meredith sermons will realize that these men contradict themselves again and again in their sermons, yet their myrmidons accept their words as those of God.

Perhaps this is one reason why WCG (and I assume PCG and LCG) had so few college graduates. College graduates are trained to evaluate what they are hearing. Most trained thinkers would not be satisfied by the Armstrong, Flurry and Meredith confusion.

I wonder, though, whether UCG has a higher percentage of college graduates than WCG, PCG or LCG? Since UCG seems to have "frozen" the Armstrong doctrines so that no one "cult leader" can do what Flurry or Meredith are doing, have they created a church environment more conducive to education?

The lack of education in the xCG groups was highly observable. Thankfully my father was one of the few exceptions (with a PhD) so it was a no-brainer I would go to a "real" college. Being intelligent made it hard to relate to most in the WCG/PCG except the few other educated people there. I found most conversations painful and boring. Trying to debate anything just got you blank stares, baseless negation, or tacit agreement.

I don't think you have to go to college to be intelligent but most people need a formal education to get their brain kickstarted.

I always wondered how my parents, both educated people, got snared in the WCG. It must have been the cultish aspect of it.

To say there no educated members of WCG in the 60s is incorrect. There were a few I can think of. I came to WCG (then Radio CG) in 1959 and when I finally enrolled in AC Bricket Wood I found David Wainwright and Anthony Buzzard already there, both with MAs from Oxford. Paradoxically, HWA regularly lauded their accomplishments.
In Pasadena there was George Geis, Bill Stenger and quite a few others with graduate degrees apart from the aforementioned Robert Kuhn. Others I can think of included Dennis Luker, Dick Ames, and a couple of MDs.
Dave Albert earned a PhD in Psychology from Oregon State too don't forget.
Still, the overall premise is true. A worldly education did not fit in comfortably with the AC atmosphere.

PCG is a cult and heavily into mind control. Someone closely connected to my family is in this deceptive thing, the woman has a master's degree in education, very smart, just not immune to deception. She is the mother of 3 adult children, 2 of them were baptized into WCG and did not follow her when she went into PCG. They do not presently attend any church. She has stopped contacting these 2 after Flurry's command to do so. Now these children are very hurt and angry because of their mother's decision, I am sure they feel rejected by one whose love should be unconditional. This is an evil organization and it could go in the direction of Jonestown because those who have remained in it seem to think that Flurry has an exclusive connection to God and they do his every bidding. One small example is the makeup doctrine, how silly!! What you put on your face or don't put on it has no bearing on what you are. These cults have always made those in them feel like they were better than anyone else, so exclusive, knowing the secrets etc. I know for I was in the old WCG during the 70's and afterwards, I still attend because it is so different now and the people are more genuine, loving and caring than before. I do not agree with all that emanates from the church headquarters. The former WCG leadership did keep on the tack that the end was near, and we were God's chosen people etc. Now the end may be near but if you believe the Bible and I do, no one knows just when it will be. God is not telling Gerald Flurry or anyone else.