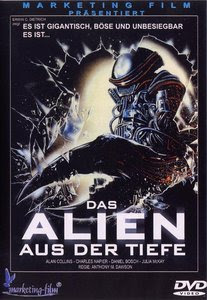 Never let it be said that AW doesn't do trivia. So... how's your knowledge of Italian Sci-Fi/Horror movies? Alien degli abissi was released in 1989, appearing in German as Das Alien aus der Tiefe and in English as Alien From the Deep. Here's a short review.

It's gigantic, evil and invincible!' boasts the tagline. Well, this alien dwarfs the original alien in physical size only. Although the film takes place on a tropic island, a few similarities to `Alien' are obvious, down to the fact that the heroine has to stand the last fight with the creature wearing nothing but her white underwear. No, I don't complain about that ;-) Anyway, the huge creature which can move under the ground is quite scary (but only until it stands up and suddenly looks like a cross between a senile robot and a lunatic crab), the characters (including a snake hunter, Greenpeace investigators, a not-yet-mad scientist and an unscrupulous officer trying to `control' the situation) help to develop an interesting storyline, and I cannot agree with reviewers who consider this a simple rip-off. (Source)

Okay, so why mention a twenty-year old movie here? Movie star Daniel Bosch, the main actor in this spaghetti splatter-pic, moved on to become a pastor in Sardinia, Italy for the Worldwide Church of God/GCI. As far as I can tell, he's still on the job there for Joe. I guess all that experience in the horror genre made him an ideal candidate. In fact it gets better, Bosch's role in the movie was as Bob, a snake venom harvester. Surreal!

Snake venom harvester. HA! Plenty of that to go around in the COG movement!

The irony is delicious.
Thanks for the chuckles Gavin.

Wow! Sounds like my kind of movie. I hope there is plenty of fake blood with body parts strewn everywhere.

As we all know, space aliens are all evil and accordingly, human aliens too. Do you have your "green card" with you?

It's not surprising that a doofus movie actor would be a WCG/GCI doofus too, is it? Well, is it?

I mean, look at the things that Hollywood actors get into all the time. Aah, the world of sex and glamor . . . and drugs and make believe lives.

Thanks for this intriguing trivia. I wish I could come u with something like that.

There's something McNairish about this fellow...do you think he cultivated the look?

And according to IMDB.com the movie he acted in before he played the venom harvester was called "Good Morning, Babylon" - weird!