Actually, I don't think the possibilities in Coulter's BAR ad could be exhausted even if this series extended to the lengths of War & Peace, but there certainly would be a danger we'd all end up as bored out of our minds as if we'd had to listen to one of Fred's interminably redundant sermons, so let's try and tie up the loose ends. 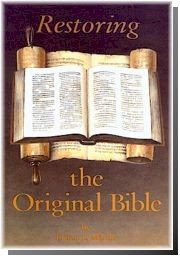 (1) The book that inspired it all, Ernie Martin's Restoring the Original Bible, is online. Coulter talks up Martin's reputation:

"Before his death in January 2002, Dr. Ernest L. Martin was recognized as one of the leading scholars and authorities of the canonical study of the Bible."

In reality Martin's doctorate was an unaccredited AC one, with the same validity as Meredith's, Hoeh's or Garner Ted Armstrong's. While a much-liked figure with a strong following among disillusioned WCG members, Martin had little clout in academia.

Martin's arguments on canonical order enabled him to pull this rabbit out of the hat. Impressed?

(2) No mention in the BAR ad of Fred himself, the glorious author/scholar/translator. For all the wide-eyed BAR reader knows, this translation has been prepared by a committee of scholars instead of one guy who pastors a series of living room congregations. Why so coy?

(3) What's the issue with the Stephens Greek text? Stephens (or Stephanus), whose proper name was Robert Estienne, was a printer in Paris. Among his claims to fame was to be the first to break the Bible text into bite-sized chicken McNuggets - the verse system we use today. Stephanus collaborated on the Greek text with the gifted Catholic scholar Erasmus, an achievement which became known (misleadingly) as the Textus Receptus. Erasmus himself recognized that the manuscripts available to him were defective, but he did the best with what he had. Better manuscripts have meant better Greek texts. Fred is nearly 500 years out of date, Masoretic red herrings not withstanding.

(4) As for an inspired or original order for the New Testament, Fred is out on a limb. His arrangement can't be justified chronologically (the first off the block may well have been Paul with 1 Thessalonians), or the earliest list of canonical books (the Muratorian canon.) Fred continues to bravely defend the primacy of Matthew's gospel, but he's spitting into the wind of Markan priority. The general epistles initially appeared together, for example, because they were obviously distinct from Paul's (and others wrongly attributed to Paul.) Anything particularly original and inspired in that?

But there's a more basic point. To restore an original order requires that there be an original order to restore. Sadly for Fred, there is no evidence that the early church produced its own triple-bound codex with handcrafted lambskin cover and gold lettering, or anything remotely resembling it. It isn't till the fourth century that complete NT manuscripts turn up. That's 300 years of Christianity without a New Testament - in any order.

Of course that doesn't stop Fred from arguing long and monotonously for his arrangement. Even if he's not very convincing, it's not a big deal... unless Fred himself makes it a big deal, which he does. 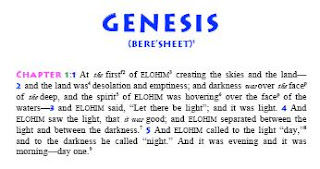 (5) A final aside. Also following Doc Martin's vision is James Tabor. This is a project that possibly predates Fred's efforts, and is still a long way off seeing the light of day. Tabor's Transparent English Bible will pack a lot more credibility than Fred's, assuming it ever gets into print (a PDF sample is available here.) I'm not sure whether Tabor intends to use the same NT arrangement, but if so one can only hope that the publicity doesn't overextend into the kind of wild claims Fred obviously relishes (the name "Original Bible Project" may indicate otherwise.)
Posted by Gavin at 16:00

Would this be a bad time to ask if anyone is interested in a Fred Coulter "Harmony of the Gospels"?

Also does anyone know of a really good "Dis-harmony of the Gospels" that points out all the differences?

There is no inspired order of course. There is only the chronological order of writing, that when understood seems to show that the Cosmic Christ of Paul came first and then a literalization of Jesus life was brought to earth by the Gospel accounts.

Putting in the other order, with the Gospels showing Jesus was first human and then cosmic, according to Paul, is more what the cause to literalize Jesus set out to achieve and the impression we have today.

It's not so much the order of the books that give a certain impression as it is the order of who wrote first in the early Jesus movements and what kind of Jesus did they portray?

Bamboo..I'd recommend, for a start, Rescuing the Bible from Fundamentalism by Spong as a beginning look into the Gospel accounts and the concept of cobbling together a story of Jesus based on OT scripture rather than any facts the Gospel writers had at their disposal about Jesus.

That was my first read 15 years ago that took all that I noticed but could not explain and provided me with some nice "aha" moments.

Dr. Raymond Brown, Catholic Scholar and author of the Birth and Death of the Messiah series spoke well of Dr. Martin but felt Dr. Martin fell prey to an overly literal view of scripture, such as trying too hard to find out what the Star of Bethlehem literally was. It was a midrashic device as was most of the material, if not all, in the birth narratives of Jesus.

Here's a good list of contradictions in the Gospels.

"The Encyclopedia of Biblical Errancy" by Dennis McKinsey comes to mind. The book itself is good, but the Biblical Errancy web site has tons more detail! This guy has a "no-holds-barred" approach to picking apart every single bible error!

Also, the "Skeptics Annotated Bible" no doubt has lots of good information.

"Also does anyone know of a really good "Dis-harmony of the Gospels" that points out all the differences?"

Bamboo, your new avatar is giving me way bad PTSD. ;-)

For a thoroughly unharmonious look at the canonical Christian scriptures, might I recommend the SAB?

Now THERE'S a "bible translation" I can get behind!

Purple Hymnal said...
"For a thoroughly unharmonious look at the canonical Christian scriptures, might I recommend the SAB?"


Yes, I like the SAB. The main reason is that they have been even handed, and allowed
‘Christian Responses’.

Many of these responses can be rather enlightening, and in most cases the response to these ‘problems’ shows how weak the SAB accusation is.

I used to flick through the SAB as well. Yes, some of the points were a bit lightweight sez you retorts, like Homer Simpson thinking "I've got to say something or they'll think I'm stupid".

Also lightweight are the COGs' works on "Apparent contradictions". Some of the higher criticism is never hinted at.

Matthew before Mark ? Only in Fred's dreams

The achievment of Mark in fleshing out the cosmic Jesus stands as the greatest, most audacious literary fiction-posing-as-fact in history

Bamboo, your new avatar is giving me way bad PTSD. ;-)

Is this one better or worse?

Thanks folks for all the great references!

Having grown up in the WCG I've been trained to be blind to them so its helpful to have a site (or several) as references.

As a member of the geek squad, I can't help but try to identify the source of your avatar.

Is it the lynch mob coming for Gideon the morning after he chopped up Baal's altar and the Asherah grove?

(You know, when you put the bald guy back in context, he's a lot funnier...)

"Is this one better or worse?"

I refuse to dignify that with any comment, save this one: Aaaaaahhhhhhhhh!

Just saw this on DC, and thought of you: Some Guides of Tools and Ancient Versions for the Study of the Biblical Text. Enjoy!