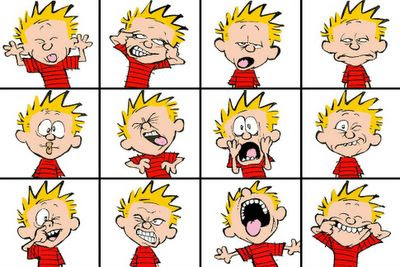 Calvin is one of the truly great figures who have impacted on Western civilization, as I'm sure you'll agree. Together with Hobbes they form one of the finest teams in comic strip literature.

It may surprise you to learn, however, that there's another Calvin. This fellow single-handedly wrenched the Reformation off course, blighted the history of Christianity across more than two continents, transformed the city of Geneva into a by-word for sullen, dour self-loathing, and turned a former colleague - Michael Servetus - into toast because he couldn't divide three into one.

Without this Calvin - a man whose approach to theology can be compared to a pedantic civil engineer on steroids - there'd have been no Puritans, Presbyterians, or any of the vile brood of Anglo sects that migrated like vultures across the Atlantic to roost in the Burned Over district. Hence no flow-on: no Mormons, Adventists, Plymouth Brethren... no pre-millennial Rapturists, no Left Behind novels, no Dallas Theological Seminary, Karl Barth, Southern Baptists and - not least for readers of this blog - no Worldwide Church of God.

There'd probably still be a Missouri Synod, but no alternate reality is perfect...

But there would be economic consequences too. The Industrial Revolution minus the Calvinist Guilt Ethic would have been the Industrial Adjustment. No "dark, Satanic mills," no class struggle, no Karl Marx, no Great Depression, no Hitler, no Cold War, Ronald Reagan would have kept his day job in the movies.

Of course, other things would have happened, but the endless chain of unfortunate events that Calvin unleashed was clearly a horrible mistake in the Divine Plan of the Ages: the archangels were obviously away on a team building weekend when the perfidious Frenchman popped up, and by the time they'd recovered from their hangovers on the following Wednesday it was too late to do much about it. Gabriel suggested creating Arminians, but Arminius was a confused post-Calvinist himself, and who can blame him?

Of course, the Calvinists would say it was all predestined, but being Calvinists they would have to, wouldn't they?

I mention this because this year is the 500th anniversary of Calvin's birth. The fateful day was July 10, 1509. Mark it on your calendar and resolve to do something the old geezer would have hated: enjoy a glass of good wine, scoff down a decadent dessert, tell a humorous story, stay up till after eight o'clock (the hour the Calvinist thought-police demanded all good Genevans retire for the night), ask irritatingly sincere questions of your Presbyterian relatives about "total depravity," "double predestination" or the Westminster Confession, read an unedifying novel...

... or just settle back in a comfortable chair with a Calvin and Hobbes anthology.


PS. For a little light musical relief, click across to the Third Witness blog where there's a YouTube video called I think my wife's a Calvinist.
Posted by Gavin at 21:33

Hey! Hey! What about me? Calvin roasted my butt, and the rest of me too for questioning the Surprising God Blog in Geneva.

And I didn't just develop a non-trinitarian theology. I noticed the Bible didn't teach one..sheesh!

I have since reincarnated as one of your regulars on AW. Now that's a great theology! Well accept for the renowned part.

Michael Servetus ( 29 September 1511 – 27 October 1553) was a Spanish theologian, physician, cartographer, and humanist and the first European to describe the function of pulmonary circulation. His interests included many sciences: astronomy and meteorology; geography, jurisprudence, study of the Bible, mathematics, anatomy, and medicine. He is renowned in the history of several of these fields, particularly medicine and theology. He participated in the Protestant Reformation, and later developed a nontrinitarian Christology.

Condemned by Catholics and Protestants alike, he was burnt at the stake by order of the Protestant Geneva governing council (This is a code word for CALVIN) as a heretic.

BTW...Calvin was forced to reincarnate as Charles Darwin who is celebrating his 200th this month. We're still laughing our ...what's your 21st Century word for that?....off.

Then Calvin wanted to get into politics so he came back as who we called Adolf Hitler. That was short lived so he said he wanted to give it one more try in religion.

He returned as a commentator for an obscure non-trinitarian, and they don't have crosses either, church. We're pretty sure that's Calvin anyway because he never allowed any comments on his comments either. Calvin was always just telling me, "because I said so Michael." And then he'd just refer me to more stuff he wrote to clear up my doubts. Boy that got old but he had the matches.

If that's not him, then our second best guess would be some tall guy (Calvin was short and always wanted to be taller) in Ohio. That "send it in" makes me suspicious because Calvin always was yelling that at us.

The Karma Fairy is rolling on the floor here.

OK now that's just strange. This article is linked under "related articles" on TSGB too.

Either somebody did something with the plugin that links WCG's "flagship" blog to the ex-CoG sites, my linking to it on "Follow the White Rabbit" somehow tipped the balance for "related" articles, or there's some kind of supernatural occurrence at work here........

Of course, linking repeatedly between TSGB and the ex-CoG blogs in the comments may be producing the results we see here. Divine intervention definitely not required!

Heh heh. I wonder what Ted Johnston thinks of this rather disturbing turn of events.......

Just so long as it's not caviar and Don Perignon, right, Gavin? ;)

Heh, I just noticed that my rather backhanded compliment made the sidebar. Really, Gavin, I didn't intend it to sound as snarky as that. You've got a great thing going here, and hopefully AW will outlast all of us. :-)

(Ah, we'll "convert" Bobby to the dark side of the force yet --- even if he is still maintaining that the church that is a hundred times the size of his, and has been around for a hundred years longer than his, is somehow the "dead" church.......)

Just so long as it's not caviar and Don Perignon, right, Gavin? ;)

Are we talking about Pasadena's favorite night time fun?

Tanking up at the local pubs and then heading over to a certain Altadena graveyard for a night time salute?

Its true about what they say about location being everything in real estate.

Yes, that Bob Thiel thing is both perplexing and somewhat amusing. Unfortunately, whether we want to or not, everyone knows everything about everyone's prophecies due to the various sites on the internet.

Doc seems to be totally discounting any sincere, individual, personal relationships one might have with God, and assuming that God will make a decision as to whether a person qualifies for the place of safety based soley on the corporate ACOG entity to which one is paying one's tithes.

I wouldn't ever consider attending COG-7 myself, but methinks the Doctor is attempting in a feeble way to scare those who might be so inclined. Armstrongism was always all about saving self from the tribulation anyway, and not about having a relationship with God. Doesn't say much for their god, does it?

WhoooooHOOOOO !! The AW article linked to TSGB's post, The Primary Task of Ministry, is none other than "Armstrong Indicted on Financial Fraud" !!!!

I tell you, it's almost enough to get me to believe in imaginary beings!! :-D (Well, OK, imaginary "karma".)

'Boxing' a whole church denomination into an 'era' precludes the concept that it can change (for better or worse), or that individuals in it may change.

Sure, that'll sock it to him -- but better yet, how about doing something God's End-Time Apostle seemed incapable of doing?

This January 16th, love your son.

Treat your daughter with respect.

Don't try to guilt people into doing what you want.

Don't use God as an excuse to abuse other people's money.

Don't use God as an excuse to abuse other people.

Try to really care about somebody else more than yourself.

Apologize for something, and really mean it.

Be a kind boss.

Don't throw people out like trash the minute you decide you've gotten all you can get out of them.

When people are loyal to you, be loyal in return.

Don't force people to decide between you and God.

Don't force people to decide between you and their family.

Realize that whatever money and stuff you may have is a gift, and find a way to use it to actually help people.

Realize that you are not the center of the universe. In fact, be glad you aren't.

Do what Herbert Armstrong couldn't do.

(Bamboo, Bamboo, Bamboo --- You changed your avatar again?? I don't know what you look like in real life, but you sure do seem to identify with Basil Wolverton's bald guys. Hiding in the rocks from the Gentiles today, are we?)

You are spot on about Calvin and Hobbs. I couldnt agree more. A daily dose is a requirment for any day to be as good as it can get.

On the other Calvin however you are only half right. Correct he was one twisted loon who affected far more lives than he should have.
But to attribute all that you did is nonsense. Depression, Marx, poor houses, the cold war... nonesense.
Bad as he was we cannot blame him for all the ills that have occurred since the 1500's.
Da Vinci painting the Mona Lisa now there is a root cause of our modern ills. The linkage from that so called "piece of art" right down to Dan Browns book and the neocons world view is obvious.

Yes, giving someone an era 'label' with its ascribed 'traits' reminds me of zodiak symbols. Pick-up lines in the Kingdom: What era were you? Is a Sardis compatible with a Smyrna? I'm a Philadelphia on the cusp of Laodicea.