I've heard a lot of folk deny that the Worldwide Church of God was inherently racist, let alone "white supremacist." As I recollect, none of them grew up as African-Americans in the bonds of their parent's beliefs.

Jerald Walker, however, did. His story is told here along with a short (9 minute) interview on WBUR which, in my opinion, is riveting listening. Walker is highly articulate, and this is no mere rant. He is now a professor at Emerson College and his book The World in Flames adds to the chickens coming home to roost.

When The World in Flames begins, in 1970, Jerry Walker is six years old. His consciousness revolves around being a member of a church whose beliefs he finds not only confusing but terrifying. Composed of a hodgepodge of requirements and restrictions (including a prohibition against doctors and hospitals), the underpinning tenet of Herbert W. Armstrong’s Worldwide Church of God was that its members were divinely chosen and all others would soon perish in rivers of flames. 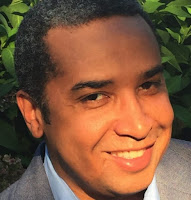 The substantial membership was ruled by fear, intimidation, and threats. Anyone who dared leave the church would endure hardship for the remainder of this life and eternal suffering in the next. The next life, according to Armstrong, would arrive in 1975, three years after the start of the Great Tribulation. Jerry would be eleven years old.

Jerry’s parents were particularly vulnerable to the promise of relief from the world’s hardships. When they joined the church, in 1960, they were living in a two-room apartment in a dangerous Chicago housing project with the first four of their seven children, and, most significantly, they both were blind, having lost their sight to childhood accidents. They took comfort in the belief that they had been chosen for a special afterlife, even if it meant following a religion with a white supremacist ideology and dutifully sending tithes to Armstrong, whose church boasted more than 100,000 members and more than $80 million in annual revenues at its height.

When the prophecy of the 1972 Great Tribulation does not materialize, Jerry is considerably less disappointed than relieved. When the 1975 end-time prophecy also fails, he finally begins to question his faith and imagine the possibility of choosing a destiny of his own.

The World in Flames is published by Beacon Press and is available on Amazon.
Posted by Gavin R at 08:29

I couldn't find this book in my library, but they DO have another book by this same Jerald Walker - "Street Shadows: a Memoir of Race, Rebellion and Redemption" Written 2010, seems to also be about Jerald's young life.

I listened to the WBUR interview. It was quite well done.

The issue of racism in the WCG and its derivatives may be viewed by Armstrongists as just another flimsy pretext among many for gratuitous criticism by detractors. But it is actually a pivotal theological issue. The policy that HWA developed on race indicates that he missed the entire thrust of the Christian gospel. You may or may not believe the gospel but if you know what the NT says, there is no way what HWA devised aligns with the NT view.

Paul divides people into two groups: Jews and Gentiles. Apparently, he did not understand that there were "non-Jewish Israelites" even though he himself was a Benjamite (A Norwegian!! He should have looked in a mirror and understood he was a Scandinavian). And he discusses at length how the barrier between the Jews and Gentiles has been dissolved by reconciliation in Christ. He talks at length about how the Gentiles have been grafted into the Jewish estate and how they have become spiritual Jews eligible for the promises made to the Jews (Again Paul seems to have left out Ephraim, Mannasseh, etc. Unless, of course Paul thought Ephraim, Manasseh, etc. were, for all practical purposes, Jews. So it was not necessary for Paul to make a special effort to fit these tribes into the picture because they lived in the far away British Isles and did not look like Jews. It is quite apparent that to Paul, these tribes were just other Jews.)

So HWA missed the mark on this important topic that is addressed in detail in the NT. Apparently, he never really read this passage or if he read it, did not have a clue about what it was saying. But because he formed the view he did, HWA opened the door for, nay attracted, a spirit of small minded, hate-filled bigotry to come into the WCG, especially from the Southern States. These people could now believe that their pathological views that led to the unnecessary Civil War, which they resounding lost because apparently God was not on their side, were endorsed by God himself. No doubt a justification they always craved.

"He missed the entire thrust of the Christian gospel"

Where do I start LOL? As IF the "christian gospel" even HAS a single thrust! It's all over the place - depending on the book and the author the New Testament has mutiple, often conflicting thrusts. Each author had his/her own slant and own motivations. Not to mention the various directions subsequent church leaders have taken.

The "thrust of the christian gospel". The very statement implies that you think you know what this is. Trust me, you don't.

It looks like this Jerald guy doesn't know what he is talking about or purposely twists the facts to make an appealing book to a modern audience.

-As I recall there was no racial argumentation to not have high ranking officers of race within the fold
-There are plenty of sermons online where hwa cites the "abba father, adopted sons" part of the bible, which is THE SINGLE thrust of the message of the defunct and former

It has to do with the "adoption" of sons (of all races) and as such cites roman law on the practices of adoption in roman families. 90% of Roman emperors were "adopted sons" according to roman law.

-The stupid utopian idea of having all races transported back to their "original" homelands is realy 19th century nation building thinking. (just like the wandering jews were to set up a homeland 100 years after the original idea) Or the Americans creating a country like Liberia.

It really all has to do with the pervasive anglo/american culture of the 1940's remember NO black person was allowed combat duty in wwII in the army. This American culture was mixed with Utopian thinking (re Thomas More) and there you have your problem.

It would be very interesting to talk with Jerald about his personal experiences, since I have some of my own. But this is more marketing than a true academic philosohpical understanding of the doctrines of the 19th century born preacher hwa.

"Within the Christian community, there are broad areas of consensus"??!!?

HWA would roll over in his grave if he heard that statement! Most of us entered WCG precisely because we rejected these "broad areas of consensus". HWA's story made more sense to us at the time. Of course, we now know we were wrong to believe HWA's doctrines. But do we turn back to the mainstream? Why not just all become Catholics or Presbyterians then?

There is broad consensus in the Christian community that we have souls. And these souls go to heaven or hell when we die. Are we to believe that? I sure don't.

"Within the Christian community, there are broad areas of consensus" indeed. Do you consider that a good argument for believing something is true? Sorry my friend, that doesn't cut it among the Skeptic community.

Thank you for sharing this valuable information.

Apparrant is the leading UX UI Design agency having experienced designers and developers working throughout the year on important and life changing products. We have been awarded as top UI UX Design agency in India by multiple agencies. If you are looking for best UX Design Agency in Noida, UI UX Design Agency in Faridabad, and UX UI Design Company in Delhi then Apparrant is best for you.

Nice Information. I really liked it and admire you for posting it on the internet for the benefit of a larger Audience.

If you are looking for best App design and development company in Noida, Delhi NCR, Gurgaon, Faridabad and India then Apparrant is Awesome. We have been known as leading Mobile and web application development company in Noida, India. Work of Apparrant can be checked on our website along with the processes we follow in to the web or App design and technologies we use at Apparrant.

It's a great blog, shares a piece of good information.

Wow its a great blog.
Best Jewellery Wholesaler in Jaipur is Ratnavali. It is a best place to buy silver jewellery Jaipur, Jaipuri gold jewellery, gemstone figures in Jaipur, Rajasthan. We have skilled craftsmanship who made best designer collection of jewellery for you.

The awesome blog shares good information with everyone. I will bookmark it in the future.

Good One. Worth reading it once.

If you are looking to Visit to Australia , Visit to Canada, Visit to USA, or Visit to UK then GIEC Global will be the best consultant for you in Australia.